The Northern Sea Route (“NSR”) runs from the Atlantic Ocean to the Pacific Ocean along the northern coastline of Siberia. Climate changes have been increasing this route’s accessibility to shipping companies. In 2014, the amount of ice in the Arctic was 30% less than in the 1980s while in 2012 the ice in the Arctic melted to a record low of approximately 60% of the 1980s average level [1]. The NSR is accessible mostly in the summer and autumn months when ice thickness reaches the lowest level in the year. Traveling through this route reduces the distance between Northern Europe and Japan by approximately 40%. A vessel sailing at a speed of 17 Knots from the Yamal LNG Plant in Russia to Japan via the Suez Canal will complete the trip in approximately 35 days. Alternatively, if the vessel sails through the NSR, it will complete the same trip in only 15 days at a speed of 16 Knots per hour. 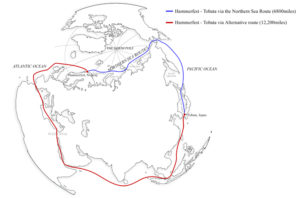 Dynagas LNG Partners Limited (“Dynagas”) is the only liquefied natural gas (“LNG”) shipping company that has successfully utilized the NSR to transport LNG. In 2012, Gazprom chartered Dynagas’s LNG carrier “Ob River” to transport LNG from the port of Hammerfest in Norway to the regasification terminal in the port of Tobata in Japan [2]. This is a historical voyage as it demonstrated to the LNG shipping world that climate changes have made shipments of LNG cargo via the NSR technically feasible and economically viable.

The ability to utilize the NSR has opened new opportunities for Dynagas and the LNG shipping world. Sailing through the NSR enables a company to reduce environmental emissions since a vessel is in transit for a shorter period of time. Ship-owners also achieve significant fuel savings per ton of cargo transported due to the shorter distance of the trip. Furthermore, the quantity of LNG that evaporates while in transit is reduced due to the shorter distance that has to be covered, leading to a larger quantity of delivered LNG at the regasification terminal. Finally, avoiding transit through the Suez Canal mitigates risks associated with attacks from pirates [2] [3].

Although Dynagas has been the only LNG shipping company that has utilized the NSR, over the years, we have seen a significant increase of different types of cargoes being transported through the NSR. Specifically, the number of vessels that utilized this route increased from four in 2010 to a maximum of 71 in 2013 and fell to 18 in 2015 [3]:

Despite the recent growth in the NSR trade, traditional LNG shipping players have been hesitant to utilize the route. Oil & Gas majors such as Gazprom are willing to charter only state of the art LNG carriers from leading and highly experienced shipping operators because of the technological complexity of the vessels and the complexity of cargo handling operations. Furthermore, building an ice class LNG carrier that is capable to transit the NSR requires a significant amount of capital, which ship owners and their financiers are usually willing to commit only if the new building contract of the vessel is backed by a long term charter contract at a hire rate that offers an acceptable return.

Going forward however, I expect to see a growing number of major LNG players that will follow the steps of Dynagas and build vessels that can transit the NSR. This move will be facilitated partly by rising temperatures that are expected to further reduce ice levels in the Arctic, making the trip easier in terms of technical and operational requirements [4]. This view can be supported by the recent orders placed by Teekay, CLNG, MOL, and China Shipping for the construction of nine LNG carriers that will be capable to transit the NSR [5].

In conclusion, Dynagas should expect to face significant competition from other LNG shipping companies as climate change will make it increasingly easier for companies to utilize the NSR. This will result not only to increased competition in securing long-term charter contracts with charterers who are looking to charter ice class LNG carriers, but also to an increase in the effective world LNG cargo carrying capacity since more vessels will be able to carry cargo through shorter distances, potentially amplifying downward pressures to LNG charter rates. To mitigate increased competition, Dynagas can only utilize its first mover’s advantage and focus on establishing long lasting relationships both with major shipyards to ensure it has access to attractively priced newbuilding tonnage, and with major LNG charterers in order to become the transportation provider of choice for as many clients as possible.

General Motors Tackles Climate Change by Talking About It

Shell: The Impact of Climate Change on an Oil Major