Rayonier Advanced Materials manufactures cellulose products used in consumer goods such as “televisions, computer screens, …, tires, paint, food, [and] pharmaceuticals.”1 Operating just three plants in the southeastern United States with only 1,200 employees, Rayonier looks like a small domestic player.2 The company, however, is in fact a global entity. With 60% of its sales to foreign countries, Rayonier is “consistently ranked among the nation’s top 50 exporters and delivers products to 80 ports around the world, serving customers in 35 countries.”3 The global trend towards isolationism, therefore, poses a significant risk to Rayonier, a risk they have recently taken steps to mitigate. Facing a future of escalating isolationism, Rayonier may need to escalate both the breadth and pace of these actions. As a small player in a big international market, however, how much can and should they do?

Reason to be concerned?

Rayonier has already experienced the negative impact of isolationist policies. In 2013, for example, China levied a 17% antidumping duty on Rayonier’s commodity products, essentially eliminating their ability to compete in China in this category.4 In 2017, the WTO finally ruled this duty violated international trade agreements, but the only outcome was a recommendation that China change its policy.5

This situation illustrates the general threat duties pose to Rayonier. According to research across industries, “antidumping duties have been shown to significantly reduce exports from named countries, 50%–60% on average, … investigations often drive export suppliers entirely out of the market,… and about half of the trade volume effect of an AD order occurs during the period of investigation” meaning that harm occurs even if the duties are overturned.6

Unfortunately for Rayonier, it looks like duties won’t go away. The US Commerce Department states, “Enforcement of U.S. trade law is a prime focus of the Trump administration.”7 Accordingly, “Commerce has initiated 77 antidumping and countervailing duty investigations – a 61% increase from the previous year.”8 US policy is likely to spur international reactions, as many economists argue “protectionism begets protectionism.”9 And, in fact, some argue that we’ve already started to see China retaliate, increasing antidumping activities to match US behavior.10

Rayonier is keenly aware of this risk. To mitigate this and other international market risks, Rayonier has started to diversify, adding commodity products to its portfolio.11 Diversification is beneficial because it means that even if foreign governments impose tariffs on some products, Rayonier can still sell others. (This occurred in China in 2013, when Rayonier’s specialty products were exempted from the 17% duty on commodities.)12

In addition, Rayonier has started to acquire foreign companies, giving it a foothold outside the US so it can avoid future duties if they’re imposed. Most recently, for example, Rayonier acquired Tembec, another cellulose producer with operations in Canada and France.13 RBC analysts applauded this acquisition, highlighting the diversification benefits shown in the charts below.14 Moving forward, in both the short and long-term, Rayonier’s annual report indicates they intend to continue diversifying to minimize risk.15 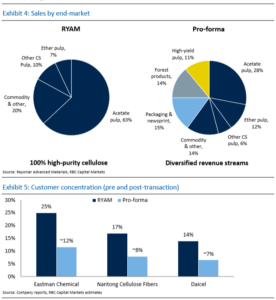 Other Options to Consider

Despite this diversification, Rayonier remains significantly exposed to duty risk. As Rayonier notes, even “Tembec has a significant exposure … [as] recently, approximately 27% tariffs were announced on lumber exported from Canada to the US”.16 If Rayonier believes isolationism will escalate, the following actions may be necessary.

First, as an immediate step, Rayonier can accelerate its R&D efforts to further differentiate its products and thereby decrease the likelihood of competitors successfully lobbying for antidumping tariffs. (In 2013, for example, China excluded Rayonier’s specialty products from duties and Rayonier claimed this was because of the product’s specialization.)17

Second, as a longer-term play, Rayonier can accelerate its international growth by building factories in foreign countries, instead of just growing through acquisition. In recent years, GE has taken this approach, with CEO Jeff Immelt stating “the company can’t depend on new trade deals to ease global commerce, but must scatter production all over the world.”18

Third, and continually, Rayonier can be more proactive fighting attempts to impose duties. The Chinese duties were imposed after Chinese manufacturers lobbied the government for them. Rayonier has 60-80 year relationships with Chinese customers, and thus potentially the leverage to ask these customers to lobby on their behalf to counter manufacturer lobbies.19

The Uncertainty that Remains

Taking the actions above requires Rayonier to invest significant time and capital that might distract Rayonier from its core operations. The right path forward thus hinges on the answer to three difficult questions. One: Is protectionism likely to continue and escalate? (Just this past month, Trump seemed to voice softer trade stance toward China).20 Two: Is it wise to build foreign factories, i.e., make long-term investments, based on unpredictable and potentially short-term political conditions?  And, three: Even if a small company like Rayonier does want to fight trade policies (directly or through its customers), does it really have any power to do this?

Can Protectionism Save Auto Jobs in the US?

Climate Change will change the way we farm and eat!

Student comments on The Impact of Isolationism on Small US Businesses… Does Protectionism Protect Them?