IKEA was born in Sweden in 1943, founded by 17-year-old Ingvar Kamprad. Ingvar’s vision was to offer customers products they needed at reduced prices, and the original product offering included pens, wallets, and stockings.

Over 70 years later, IKEA has grown to include 361 retail locations across the globe and over 164,000 employees, and now primarily sells furniture and other homegoods. Despite the changes and growth over the past seven decades, the vision of offering customer quality products at prices the masses can afford has remained constant. IKEA’s business model today is this: sell high volumes of innovative home furnishings at affordable prices.

To continually produce innovate designs, IKEA sources designs from a large network of freelance designers. By using freelance designers rather than a fixed employee base, IKEA can keep sourcing fresh, new ideas for their designs. Additionally, IKEA seeks designs that have global appeal – not only does this result in an interesting, international aesthetic, but also allows for lower manufacturing costs through standardization, compared to a model which has a greater number of SKUs.

To be able to offer their customers affordable prices, Ikea must in turn have an operating model that keeps their own costs low – from sourcing, to manufacturing and transportation, to selling the finished goods to customers. After sourcing the raw materials from suppliers, IKEA manages each stage in this supply chain, which allows for easy and transparent communication between steps, avoidance of the bullwhip effect, and a high degree of control over cost, quantity, and other aspects of production.

Beginning from the furthest point upstream, IKEA keeps their sourcing and raw material costs low by maintaining a network of over 1,800 suppliers across 50 countries. This allows them to take advantage of competition between suppliers, as well as adjust between countries to take advantage of currency or economic trends. Additionally, IKEA can leverage their size and large-volume orders to negotiate prices with suppliers. The tradeoff IKEA chooses is that with more suppliers, it is more challenging to maintain strong relationships and they may be losing out on some economies of scale, but they gain flexibility and competition driving down prices.

Once materials have been procured, IKEA manufactures their own furniture. IKEA practices what they call the “democratic design process”, wherein they manufacture ready-to-assemble furniture that customers build themselves, rather than fully assembled pieces. IKEA can then pack the finished goods in flat packages, which provides cost savings from decreasing transportation, packaging, and storage costs. 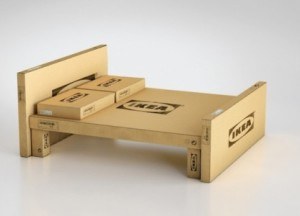 Finally, the packaged furniture is sold to customers in IKEA’s iconic retail locations. These blue-and-yellow havens, which represent a day of enjoyable shopping experiences for customers, represent additional cost-saving choices in IKEA’s operating model. The stores have minimal sales people, relying instead of a self-service model supplemented with very clear labels and signage. This reduces labor costs. IKEA usually locates their retail locations outside of major cities, where they can get lower real estate and rental costs. IKEA also makes efficient use of their retail space by reserving part of the stores for browsing, and the other part for warehousing and storage, where customers can retrieve items they’ve selected from the browsing area. This reduces the need for separate warehousing and storage facilities, and lowers transportation costs between storage and retail. 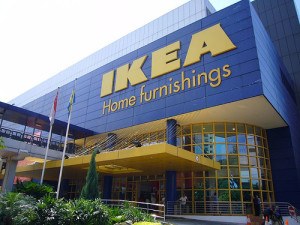 As a result of the strong alignment between IKEA’s business model of providing affordable furniture for the masses, and the operating model which achieves low costs, IKEA has experienced great success. IKEA has seen continually increasing revenues and stores, and last year, reported approximately $13 billion in profits.

Reductions in transportation, storage, and packaging from IKEA’s operating model has also helped them achieve their mission of doing right by the environment; IKEA reduced CO2 emissions by about 20% between 2010 and 2013. As of May 2015, IKEA was ranked #45 on Forbes’ list of most valuable brands with a brand value of $11.8 billion. And cost-conscious shoppers worldwide can live happily in their stylishly decorated homes.

Student comments on The IKEA Concept: Furniture for the Masses