Looming Threats to the Beverage Industry

Within the last decade, the effects of climate change have garnered international attention, becoming prevalent in the political scene and (almost) unanimously recognized by the global community. In response, corporations have increasingly turned their focus to mitigating the threats posed on the environment in order to ensure continued business viability.

Fighting climate change is a tough pill to swallow for players in the beverage industry. As a company who relies heavily on the future prosperity of agriculture for sustained procurement of raw materials (i.e. sugar cane, sugar beets, and citrus), Coca-Cola finds itself particularly vulnerable to threatened supplies of key commodities[2]. Water conservation is also an important priority, since water is the primary ingredient in its products[2]. Furthermore, the company’s supply chain processes accelerate the harm to the planet; manufacturing, packaging, and transportation of its products all worsen the overall carbon footprint[2]. If regulations on emissions become more stringent, Coca-Cola will undoubtedly suffer.

To combat the above risks and allow for the continued well-being of the planet, Coca-Cola has prioritized shrinking its climate change contributions while growing its businesses. For instance, the company has committed to reducing the carbon footprint of “the drink in your hand” by 25% by 2020 (benchmarked to the 2010 version); by 2015, it had achieved a 13% reduction in this metric[2]. Other key initiatives include:

Cooling Equipment: At Coca-Cola, refrigeration is the largest source of greenhouse gas emissions[2]. To mitigate this, the company is phasing out hydrofluorocarbon refrigerants, which “function as a sort of supercharged greenhouse gas, with 1,000 times the heat-trapping potency of carbon dioxide” (Davenport)[3]. The company is also placing intelligent energy management devices inside vending machines, which has resulted in a 40% increase in energy efficiency since 2000 from light and temperature adjustments inside the coolers[4]. 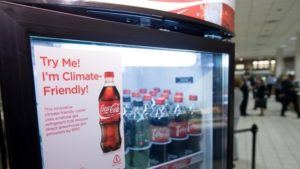 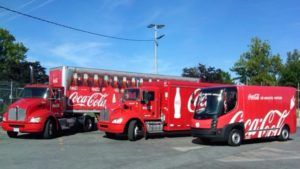 Water Conservation:  As the 24th largest industrial consumer of water, Coca-Cola must closely monitor its water use. To date, the company has spent over two billion dollars on water conservation and water quality efforts[6]. As shown below, the company has reduced the amount of water used per liter of product by 27% over the last 13 years and hopes to achieve a further 14% reduction by 2020[7]. 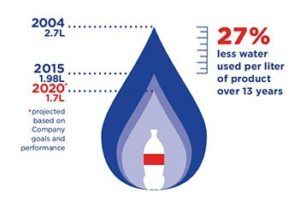 Packaging: Product advancement led to the creation of a Coca-Cola bottle that is “part plant” (composed 30% of sugar-cane-based materials), but that looks, feels and functions identically to the pure-plastic alternative. This innovation reduces the bottle’s carbon footprint by 12-19%[8].

But Is This Enough?

Although Coca-Cola has taken commendable steps to reduce its adverse impact on the environment, considerable room for improvement remains. Within the company, ideas include: (1) Prioritizing worldwide adoption of hydrofluorocarbon-free equipment; (2) Shifting its entire delivery fleet to hybrid vehicles; and (3) Continuing to innovate and revolutionize product packaging to decrease the harmful effects of reliance on plastic.

However, collective efforts are necessary to successfully tackle a challenge as large as climate change. As an industry leader and global mogul, the company can influence and exemplify climate change initiatives both internally (within its own supply chain) and externally (with other players).

Although some companies, like Coca-Cola, are committed to climate change initiatives, evidence indicates that oftentimes their suppliers do not share that commitment, trivializing the overall impact of sustainability in the production process[9]. For example, agricultural producers generally do not focus on cutting emissions, despite creating over half of the total emissions in the supply chain[1]. Coca-Cola has the clout to leverage scale and purchasing power in order to influence its supply chain to further these initiatives and hold parties accountable for measured outcomes.

Additionally, Coca-Cola has the opportunity to increase awareness and visibility of climate protection efforts to industry players. By encouraging others to join the Beverage Industry Environmental Roundtable, they can further BIER’s mission of “bringing together leaders in the beverage industry to advance the sector’s environmental stability”[10]. 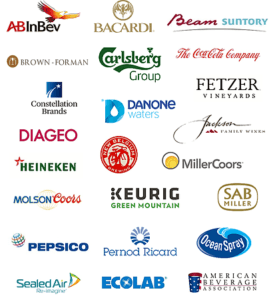 What more do you think that Coca-Cola could do to encourage others to get involved and interested in the imminent impacts of climate change? Some may argue that the company shouldn’t bear the responsibility of educating the entire industry, but at what cost does that come to the future for all?

“The Chocopalyse”: Imagine a World without Chocolate

How ExxonMobil can become carbon neutral in 20 years, and make money doing it