As one of the largest home improvement retailers in the world, THD gives consumers the opportunity to improve one of their basic human needs – shelter. This places the company in a unique position to influence projects that incorporate sustainability. However, the company also has a corporate social responsibility to employ sustainable practices when delivering this benefit to consumers.

In the past, THD has garnered negative media from environmental groups about certain company practices. For example, the company historically sourced lumber by purchasing 10% of Chile’s annual wood exports, which mostly came from forests that had been clear-cut or burned down [1]. Since then, the company has sought to play a more active role in its sustainability efforts. For example, the firm began lobbying governments and loggers to stop overcutting forests and also stopped purchasing wood from endangered forests. Additionally, climate change has been said to contribute to changing weather patterns and extreme weather trends [2]. Home improvement retailers like THD benefit from natural disasters such as Hurricane Sandy, when “in the three months after the storm, the company attributed $242 million in sales to the event as residents and businesses pieced back together their former homes and livelihoods” [3]. However, the Home Depot Foundation also donated $1 million in disaster relief efforts and provided home rebuilding support [4]. The company has made even larger strides recently to mitigate their carbon footprint and demonstrate their commitment to preserving the environment.

Merchants have been working with suppliers to offer products that not only offer customers considerable cost savings, but also reduce the negative impact on the environment. With over 17,000 ENERGY STAR certified SKUs offered in stores and online, the company has helped its customers save roughly $700 million in annual utility costs and it has decreased greenhouse gas emissions by 4 million metric tons, leading to its ninth year of recognition from the Environmental Protection Agency (EPA) for its continuous innovation in the category [5]. At the same time, the company has exemplified the concept that it is possible to be both financially viable and environmentally-conscious by generating revenues exceeding $8 billion from these products [6].

With over 2,000 store locations and an average of 100,000 square feet per location, THD store operations can have a considerable impact on the environment. The company has reduced its use of energy consumption in store operations through initiatives such as lower-wattage store lighting and higher-efficiency HVAC units. Additionally, they have made a commitment to leverage innovative renewable energy sources by 2020 through initiatives such as a fuel cell program, which provides up to 85% of energy a store needs to operate [6]. Exhibit 1 below details the multitude of ways the company is making sustainability improvements throughout its stores [6]. 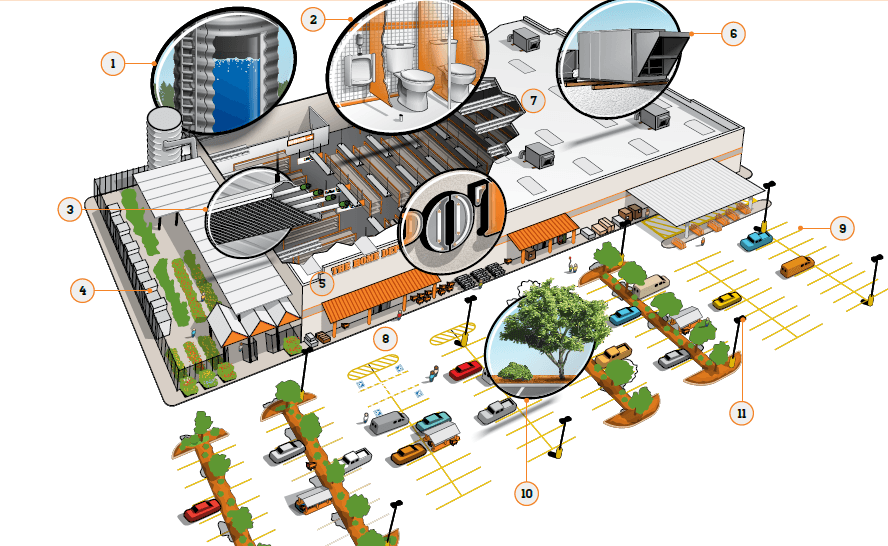 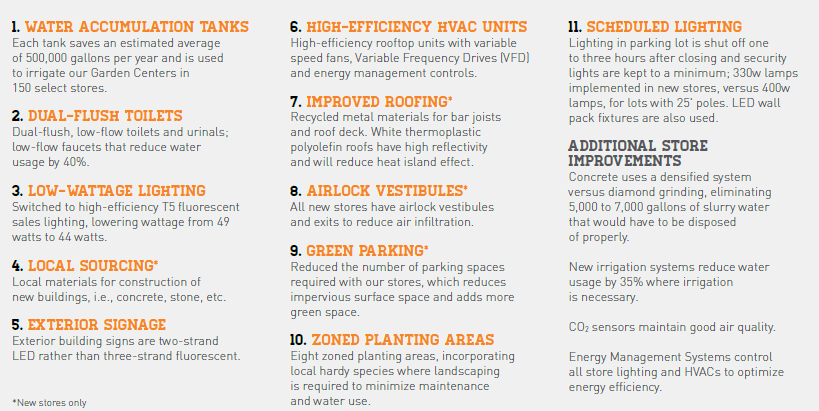 The company also impacts the environment beyond the walls of its retail outlets through its supply chain networks, which emit fossil fuel carbon emissions from combustible engines. The company has aimed to reduce these emissions by optimizing their truckload deliveries from a centralized distribution center. This not only minimizes supply chain expenses, but it also significantly reduces the number of miles driven and optimizes on full truckloads. The company is also seeking to leverage innovative hydrogen fuel cell-powered forklifts, which don’t emit any emissions and have no upstream CO2 impact. Exhibit 2 shows a 1,600,000-square foot Distribution Center that is utilizing 200 of these forklifts, which has saved over 2 million kWh of electricity by not having to charge forklifts and has avoided emitting 800 metric tons of CO2 [6]. 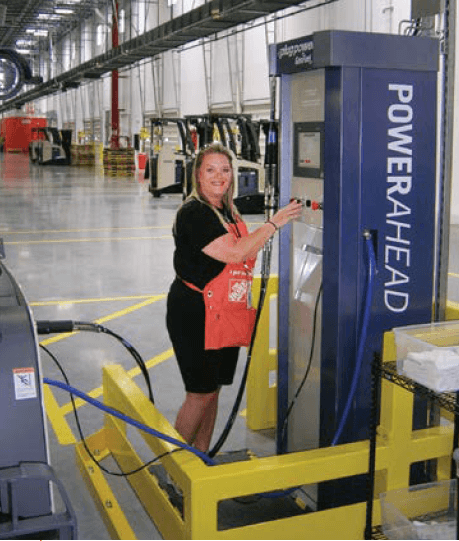 While the company has made significant progress in meeting and exceeding their goals towards sustainability, the company can do much more to help the environment. For example, in 2015, the company installed fuel cells in 81 stores, which resulted in the removal of 870,522 pounds of CO2 per year and per store [6]. While this makes progress towards generating electricity without combustion, the company has over 2,000 stores and still has a long way before scaling up to all locations. Additionally, the company made progress within its store operations to implement low-wattage lighting in its stores. The company can make even further progress by switching to LED and preventing a greater amount of greenhouse gas emissions. Lastly, the company should consider complementing its 17,000 ENERGY STAR SKUs with a service to help customers make the transition of being more environmentally friendly. The Home Depot has made significant strides towards mitigating the effects of climate change within its stores, supply chain networks, and customer base. Looking forward, there is a significant opportunity to deepen its impact even further.

Shell: The Impact of Climate Change on an Oil Major

ITC: $40B diversified Indian conglomerate at the forefront of climate change