Aviation is on a growth path that is nearly stratospheric. In a rare case, Boeing and Airbus agree that the future is bright with a projected doubling of commercial aircraft in service1. 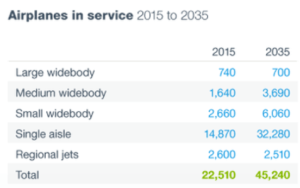 Tied to the massive growth in aviation is increased greenhouse emissions occurring with every flight (along with the energy used for manufacturing). Boeing Commercial Airplanes’ goal to create more fuel efficient aircraft is a solution that benefits both the environment and Boeing’s customers, as fuel is the No. 1 cost, overtaking labor costs years ago, for an airline2. As a result, 10-15% increases in fuel efficiency of derivative airplanes and (ideally) 20-25% increases in fuel efficiency of all new airplane programs are a logical business step without even considering climate change1.

Viewed in isolation, these fuel efficiency improvements seem outstanding, however a broader context shows “aviation is currently responsible for 2% of global emissions and… if left unregulated, aviation emissions have been projected to account for as much as 22% of global emissions by 2050”3. As a result, regulation has been put in place by the International Civil Aviation Organization (ICAO) with over 60 countries committing to “carbon neutral growth” in international flights after 20214. This is not a perfect measure, but it is a start.

In order to cooperate with the existing regulations and to help airlines to meet them as well, Boeing begun several initiatives. Operationally, Boeing’s 737 plant in Washington and 787 plant in South Carolina are powered entirely by renewable sources. On the airline side, Boeing is partnering with multiple companies on biofuel research to utilize in jet engines (with commercial tests being completed using up to 15% biofuel).  Boeing is also working with government entities to make airspace more efficient, such as arrival procedures that cut fuel use 400 to 600 pounds per arrival (1,900 pounds of carbon dioxide emissions)1. 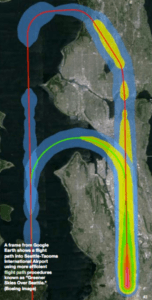 Lastly, Boeing has created three flying test beds to accelerate the development of over 50 separate technologies in a program called the ecoDemonstrator (seen here: https://www.youtube.com/watch?v=tQM8XiGxSQM).

All of these measures are positive, however only with impeccable execution across all initiatives, will the new regulations be met. The first issue that has become abundantly clear is a fundamental flaw in Boeing’s product development process. The research and development costs for new airplanes have grown at a backbreaking exponential rate with the latest program, the 787, running at least $32 billion over budget5. Without execution, the company will fail on its next new airplane. As important, the time to market of a new airplane is 5-10 years with each program being run for roughly 20 years, and an individual airplane’s life span set conservatively at 25 years. Consequently, currently new airplane lines will likely be around for another 45 years, painting a bleak picture of innovation. Long shot projects are few and far between, such as the Subsonic Ultra Green Aircraft Research (SUGAR, seen below) which had aimed for 60% fuel reduction in the 2030-2035 timeframe6. Realistically, SUGAR is unlikely to be produced for many years. Unfortunately, the only game-changing innovation since the jet engine 50 years ago has been carbon composite airplane fuselages. Massive new innovations are necessary to keep increasing fuel efficiency at the same rate. 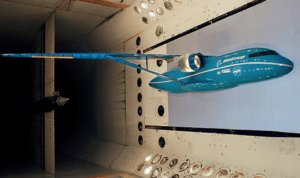 Another core issue is airspace’s lack of efficiency. Boeing has made strides with flight path optimization as mentioned above, but the FAA controls the majority stake in the US. Air traffic management has been undergoing an upgrade called NextGen. This $40 billion program has already spent $6 billion with little to show for its efforts aside from scathing reviews and critics calling for the privatization of air traffic management7. Overhauling a system crucial to public safety, yet integral to unlocking huge efficiencies in route optimization and emissions reduction has left the government making miniscule changes.

Boeing’s, and aviation’s, path to the future lies in a more agile product development process with leaner teams on a shorter schedule. An increased use of Performance Improvement Packages would allow Boeing to place new innovations on older airplanes. You cannot gamble with human safety, but Boeing increasing flying test bed work while more tightly partnering with the FAA will be the only way for the company as we know it to survive. Boeing also needs to force engine companies to continue to innovate as quickly as in the past, with ~1% efficiency gains per year being a bare minimum for continued success8. Lastly, Boeing needs to continue to spend on moon shot concepts because if there is no dramatic change in aircraft design then the ability to find incremental improvements diminishes with time. If Boeing does not make changes to its process in the near term, either emissions will continue to skyrocket or a new player will penetrate the market to fill that void.

Pictures (in order of appearance)

Student comments on The Future of Flight: Boeing’s Emissions Battle