With chocolate consumption rising in areas such as Asia and cocoa production slowing in large part due to climate changes, a pretty strong deficit of cocoa beans has resulted which chocolate manufacturers are trying to address (Figure 1)1.

Cocoa beans grow in warm, humid areas of the world. Unfortunately, with global warming advancing, many places where cocoa beans previously flourished may become unsuitable for cocoa bean growth as they grow warmer, grow drier, and have decreased precipitation2. 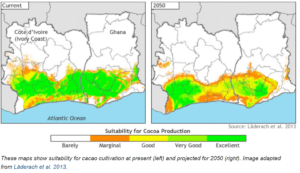 While climate change has already affected cocoa bean growth, this impact is only expected to get worse with time. A 2011 study was done by the International Center for Tropical Agriculture (CIAT) which reaffirmed this, showing that soon Ghana and Cote d’Ivoire will become unsuitable for cocoa growing. By 2050 it is expected that rising temperatures will make uphill the only place cultivable for cocoa plant, rising from 350-800 ft up to 1500-1600 ft, into hilly regions (see Figure 2)3. As the map demonstrated, this is true in Ghana’s Atewa Range; however, the government will not allow cultivation of cocoa beans and farming in this region because the natural habitat is protected. The government will eventually have to decide between the lesser of two evils: either losing a huge part of their cash crop business or preserving their natural habitats.

With climate change, there has been a movement towards moving cocoa bean production to climates that have higher precipitation growth. For example, in recent history, Central American farmers have focused primarily on coffee trees, but with changing climates the land may be put to better use shifting to cocoa beans. While some companies have started moving their production to other climates such as Central America, this is not a possibility for companies like Hershey’s that produce high volume and low margin goods since the emphasis in this region is on quality over quantity4.

This disruption will directly affect the livelihood of many farmers in developing countries, where most of the cocoa beans are grown (see Figure 35). Currently more than 10 million West Africans depend on cocoa for a large piece of their families’ income6. Approximately 80-90% of cocoa beans come from small, family-run farms (world cocoa); many of these family farmers use cocoa beans as ATMs – where they can easily grab pods and sell them quickly when they need cash to pay for expenses7. In fact, the disruption has already started with farmers in Ghana unable to grow the pods on their trees to maturity; the pods are instead shriveling even if the cocoa tree is closer to maturity1.

What should Hershey Do?

Hershey decided to take preventative action by helping to both improve the farmer production and raise cocoa bean production workers’ incomes. Hershey launched the Learn to Grow program in 2012 in Ghana, where they have been using cocoa beans for producing Hershey’s Kisses and Reese’s Peanut Butter Cups from for 50+ years. Andy McCormick, the Senior Director of Cocoa Sustainability at The Hershey Company, stated that Learn to Grow “provides cocoa farmers with business skills and good agricultural practices”6. Hershey also provides farmers with resources such as fertilizers and modern farming devices. This program was expanded to Nigeria in 2013 to improve water and power provision strategies there as well6.

Another method they are helping the farmers in Ghana is through an initiative called CocoaLink, where Hershey is providing mobile phones to farmers. CocoaLink provided a way for farmers to communicate with one another and showed that “yields, adoption of farm practices, and acquisition of useful social and health information by those farmers who used” were statistically significantly improved6.

While Hershey has done their best to help farmers feeling the effects of climate change, they are also doing their best to combat further exacerbating climate changes through a variety of initiatives ranging from reducing packaging materials, to investing in water efficiency, to bringing down greenhouse emissions and slowing deforestation8. Some of their tangible targets include reducing their greenhouse gas emissions by 50% by 2025 and reducing water use by an additional 25% by 2025 (8).

The Iconic Red Coke Bottle Tries Green On for Size

Student comments on “The Chocopalyse”: Imagine a World without Chocolate