A centuries-old dream has come true. The Northwest Passage, an Arctic sea route north of Canada connecting the Atlantic to the Pacific, is finally navigable. Once icy year-round, the Passage now melts enough during the summer to allow ships through.

Seriously, that’s what some businesses are saying. This past summer, Crystal Cruises, a luxury travel company, sent the largest cruise ship to date through the Northwest Passage.[1] Starting in Alaska and ending up in New York City, the Serenity carried 1,700 passengers and crew members through stunning ice vistas, stopping to visit local villages like Ulukhaktok (population 402[2]). Fares started at $22,000. 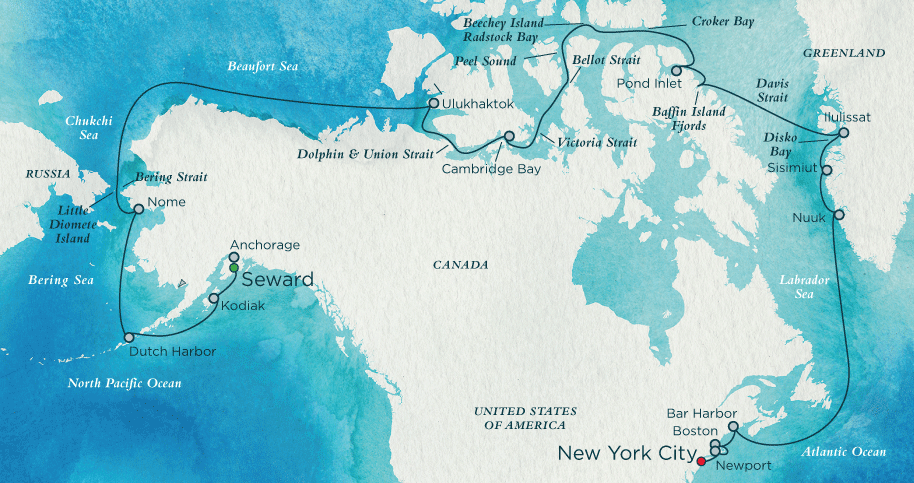 This journey was not without danger. The Serenity faced unpredictable weather and uncharted icy waters with no rescue bases.[3] In case of disaster, an icebreaker ship, the RSS Shackleton, accompanied the Serenity with helicopters and emergency rations. Before the trip, Crystal Cruises worked on evacuation plans with both the US and Canadian Coast Guards.[4]

With the inaugural journey complete, Crystal Cruises is planning on making the Arctic cruise a regular offering. In addition to taking bookings for Summer 2017, it has announced the construction of the multi-million-dollar Endeavor, “the world’s first purpose-built polar class mega-yacht.”[5]

As it ramps up its operations in the Arctic, Crystal Cruises has a few obstacles to consider.

Critics claim Crystal Cruises’ presence in the Arctic is endangering the very ecosystem it brought its passengers to see.[6] Although the Serenity used low-emissions fuel and cautious waste-disposal programs, those may not suffice forever.

Crystal Cruises will have to comply with two sets of environmental regulation: that set by the International Maritime Organization and the more restrictive set by individual countries[7] such as Canada.[8] Anticipating and lobbying for favorable regulation is critical to the success of future Serenity cruises as well as the construction of the Endeavor.

The Serenity made stops at Inuit villages throughout the cruise, to mixed reactions from locals. While some welcome the money, others worry they do not have the infrastructure for so many visitors. Others worry the cruise is aggravating an existing problem: the wildlife, their source of food, is disappearing with the ecosystem.[9]

Given the existing national concern around the wellbeing of the Inuit,[10] Crystal Cruises should prepare contingency plans in case either the villagers or Canada says that passengers are no longer welcome ashore.

Canada claims the Northwest Passage as its own, while the US argues it is international territory.[11] The outcome of this dispute has concrete ramifications.

Currently, Canada allows the Serenity to travel through the Northwest Passage. But the country could easily deny it safe passage on the aforementioned environmental or social grounds. If the Passage were international straits, the Serenity would be concerned only with international regulation.

Canada presently takes responsibility for rescue in case of emergency. But its seven icebreakers are not sufficient to patrol the whole Arctic area. Russia, the US, and other Arctic countries would gladly swoop in to the rescue, if only to prove—through Canada’s incapability—that the waters should be international.[12]

Should disaster strike, Crystal Cruises could be caught in the crosshairs of an international dispute. Let’s hope all passengers and crew would still get rescued.

Although Crystal Cruises has the frontrunner advantage in this logistically complex journey, competitors will not be far behind. Increased cruise traffic amplifies the risk to the ecosystem, the strain on village entertainment, and the complications of rescue operations.

Looks like it won’t be smooth sailing for Crystal Cruises from here on out.

[2] Chris Sorenson, “The One Percent Are Coming to the Arctic,” Maclean’s Magazine, July 19, 2016. http://www.macleans.ca/economy/the-one-per-cent-are-coming-to-canadas-arctic/, accessed November 2016.

[12] Chris Sorenson, “The One Percent Are Coming to the Arctic,” Maclean’s Magazine, July 19, 2016. http://www.macleans.ca/economy/the-one-per-cent-are-coming-to-canadas-arctic/, accessed November 2016.

Student comments on The Battle at the Top of the World