Technological advancements like cloud computing and artificial intelligence (AI), a rapidly and consistently growing mobile internet user base (150m in 2014 to 350m in 2016) [1], and the corresponding proliferation of user data or “digital footprints” have driven two major developments in India’s banking system:

A third, uniquely Indian dimension has been the development of publicly accessible, unified digital infrastructure such as Aadhaar (a biometrically-verifiable unique identity for every Indian) and IndiaStack (APIs underlying an interoperable digital payment network, a digital signature system, and digital lockers) [3]. This has widened the competitive playing field substantially for Axis – not only new non-bank entrants but also digital laggards among existing banks can adopt these open architecture platforms to accelerate their own digital capability-building. Additionally, by driving down the cost of customer acquisition and servicing relative to physical acquisition, verification and disbursement, this infrastructure has made expansion into less-accessible rural areas and traditionally “unbanked” customer segments more viable for Axis.

Having identified the need to realign around digital, Axis began upgrading core processes to better serve its digitally-enabled customers. Despite 66% of its transactions being digital, it focused on re-engineering both the back-end software and front-end customer experience at its branches, deploying a faster, more user-friendly, modular software platform, and installing digital self-service kiosks and biometric readers to facilitate automated account sign-ups [4][5]. The now leaner branch teams can spend more time cross-selling versus processing, further boosting profitability and engagement.

Axis has also used robotic process automation to reduce the time and human error involved in data entry and verification [5]. In a rare case of an Indian incumbent acquiring a prominent, albeit struggling disruptor, Axis acquired Freecharge, one of India’s leading mobile payment startups, in 2017.

To sustain its technological progress and build internal capabilities over the medium term, Axis created a Centre of Excellence comprising members from its technology and transformation teams and from partners like Infosys and WorkFusion. It has also hired a team of engineers for its “Thought Factory” innovation lab to focus on cutting-edge AI (beginning with chatbots), cloud and mobility solutions [6]. 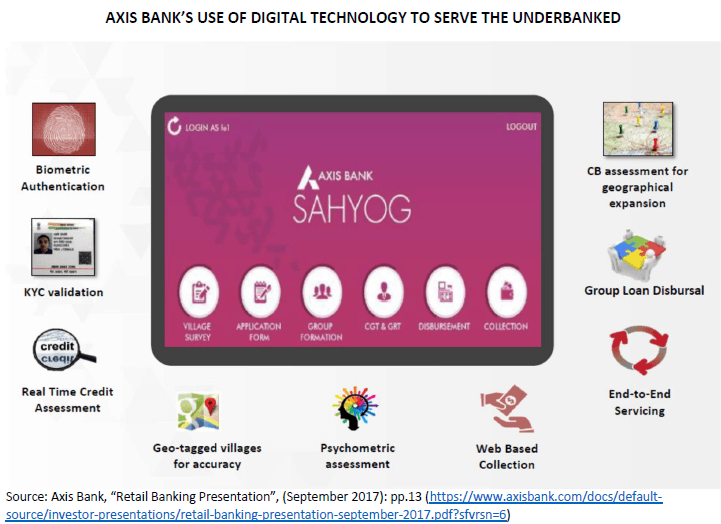 Can More Be Done?

To drive the system-wide strategic shift necessary to be a digital banking pioneer, Axis may need to consider altering its stance on branch expansion. While an omnichannel presence is important given varying customer preferences especially in smaller towns, growing its total branch footprint by 400 per year [4] seems misaligned with a desirable long-term goal of being “digital-first”. Prioritizing its ongoing engagement with “business correspondents” – intermediaries that help banks navigate the last-mile problem to serve remote customers in a more asset-light manner – could be explored.

Organizationally, while “Centres of Excellence” add tremendous value as independent labs, an even more agile, cross-functional organizational structure within the core business would be required to bring products to market much faster and to build first-mover advantage in the latest technology-based solutions. Finally, using AI not just to identify credit and fraud risk but also to preempt cyber security threats will be critical.

Over the medium term, Axis could consider disrupting itself by incubating a “digital-only” bank. A few newly-licensed Indian banks are already taking this radical, digital-only route; Axis could learn from their missteps while concurrently building a futuristic model inside its four walls. It could look to reimagine itself as not merely a bank but a one-stop information and transaction hub for multiple non-financial services as well, akin to the WeChat payment-enabled ecosystem model in China.

There appears to be plenty of positive momentum surrounding digitalization both at Axis and within the broader financial services industry today. The question I wrestle with is: Can Axis turn its “incumbent” status into a competitive advantage rather than a potential liability? Can it leverage existing strengths like its trove of customer data to consistently develop the most innovative B2C and B2B digital financial products? Will it challenge convention by aspiring to a bold long-term vision, say “to be 90%+ digital in 5 years”?

Can Ocado Weather the Disruption of the Grocery Industry?

Student comments on The Axis of Change: Navigating the Digitalization of India’s Banking Industry Value Chain