On August 23, 2005, Hurricane Katrina caused catastrophic damage in Louisiana and the Southern United States. Katrina’s winds and twenty-seven-foot storm surge caused $81 Bn of damage and over 1,800 lives lost [1]. Amidst the heartbreaking devastation, emergency response teams were slow to reach the citizens in need. Responses by both government agencies and non-profits such as the American Red Cross were widely viewed as insufficient in the wake of such a massive disaster.

Today, organizations like the American Red Cross are eager to leverage technology to improve response times to large scale natural disasters and empower local communities with easily accessible preparedness information. The hope is that if faced with another Hurricane Katrina, quicker response times could save even more lives. 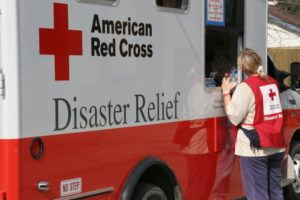 The American Red Cross responds to over 70,000 disasters in the United States each year, as well as working internationally with global networks to deliver lifesaving services [2]. The Red Cross works in partnership with government agencies to provide services to disaster victims including shelter, food, health, and mental health services. As part of its mission, the Red Cross promises to “always be there in times of need” [3], and its business model depends on being among the first responders to a natural disaster and mobilizing its people and donor capital towards that effort. To quickly and accurately respond to global natural disasters, the Red Cross relies on maintaining accurate real time information flows that help the organization make decisions on where and how to deploy people and physical supplies so that they can truly always be with those in need.

A large problem the Red Cross faces in regards to information flows is obtaining accurate information on the location of communities within affected disaster zones. Hundreds of millions of people are currently unmapped by traditional census tools, particularly in informal low-income communities in major urban areas [4]. To incorporate these citizens into disaster response planning, the Red Cross started the Missing Maps project in conjunction with several other humanitarian organizations.  For two years, 16,000 volunteers used satellite imagery to identify buildings, infrastructure, and geographic features that helped put 20 million people on the map [4]. This past year, Facebook sped up this progress by sharing its population density data with the Missing Maps project. Facebook incorporates a machine learning layer that is purely trained on binary data of whether an image contains a building [5]. The model has proven to be very accurate in sparsely populated areas such as Malawi, in which Facebook predicted houses with 94% accuracy [5]. Together, Facebook and the Red Cross hope to map an additional 200 million people [4].

Aside from knowledge into distribution of local communities, the Red Cross also needs to have real time information as to where the effect of the disaster is being felt. Using grants from Dell, the Red Cross created three Digital Operations Centers that leverage social media to respond to natural disasters [6]. The centers use Salesforce’s Marketing Cloud to listen to social media conversations happening in disaster-affected areas and incorporate that on-site data into their disaster response decision making, including where to position people and supplies [7]. Social media content such as affected street addresses, on the ground photographs, and real time road conditions can save response teams valuable time and increase the overall effectiveness of the Red Cross. In addition, the Red Cross can share this information with government agencies to increase effectiveness of the entire disaster response effort.

The Next Frontier of Technology in Disaster Response

The Red Cross has effectively used partnerships with Facebook, Dell, and Salesforce to leverage technological innovation in obtaining real time data that allows for faster and more accurate disaster response. Interesting possibilities for the Red Cross to consider going forward include:

Under Armour: The Next Big Tech Company?

3 thoughts on “The American Red Cross: Could the Future of Disaster Response Involve Drones and Machine Learning?”