Oil usage is the single largest contributor to greenhouse gases (GHG) in the entire planet. According to the EPA, CO2 represents 81% of all GHG’s and oil combustion is the number one source of CO2 emissions [1]. Because of this, governments around the world are pursuing policies and regulations aimed at decreasing dependence on oil.

So who could possibly be worse to tackle the global threat of Global Warming than the largest oil company in the world?

But… then again, who else would have a larger financial incentive to invest in technologies that reduce carbon dioxide levels and replace non-oil related sources of greenhouse gases to solve climate change once and for all?

Saudi Arabia’s Aramco is the largest oil and gas company in world. Aramco produces 10 million barrels of crude oil per day – more than 10% of the world’s oil production [2]. Its production is more than 2.6x than that of Russia’s Rosneft, the next largest producer of crude oil (Exhibit 1). Additionally, Aramco has 261 billion barrels of proven crude-oil reserves – the largest of any oil company in the world [3]. Importantly, Aramco has a cost of production of $9.90 per barrel, which is the lowest cost of any oil producer besides Kuwait (Exhibit 2).

In January 2016, Mohammad bin Salman Al Saud, the Deputy Crown Prince of Saudi Arabia announced his intentions to IPO Aramco, which will make it the largest publicly traded company in the world. [4] 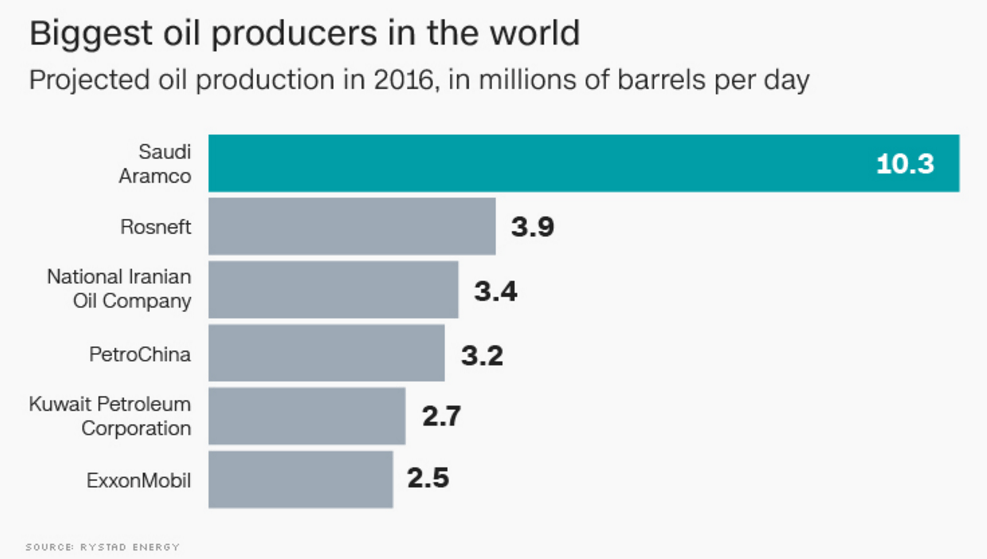 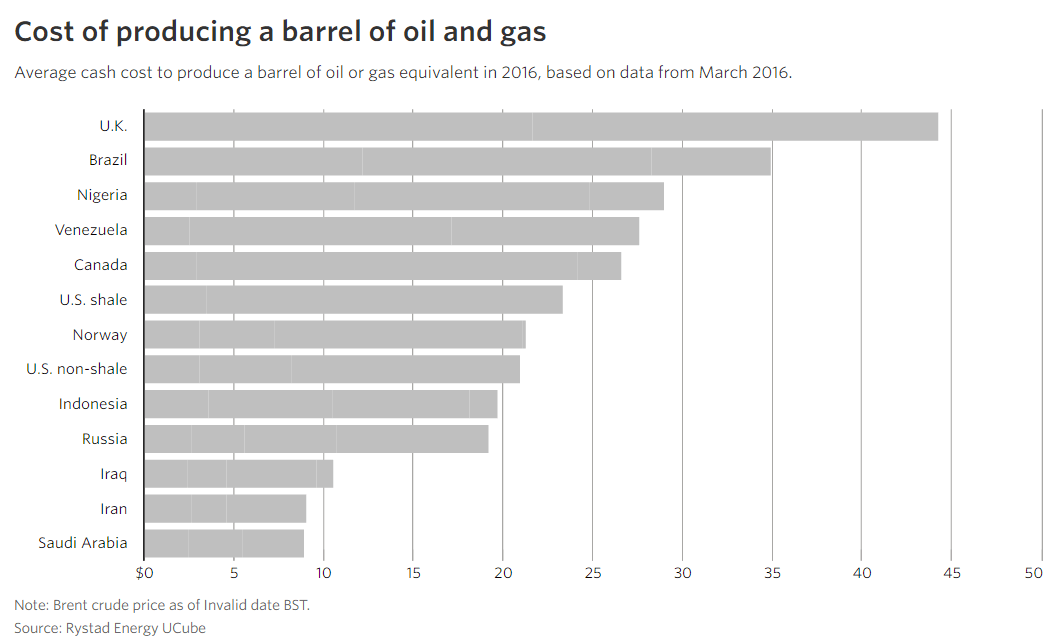 How is Aramco likely to be affected by Climate Change?

As our global annual production of GHG’s continues to accelerate, governments, companies and NGO’s are increasingly focused on finding ways to curtail our dependence on oil through regulation, tariffs, taxes, and funding renewable energy sources.

Additionally, consumers are looking for ways to reduce their carbon footprint through making lifestyle changes such as purchasing hybrid and electric cars.

Because of this, Aramco’s business model is facing an existential threat from climate change as the entire planet is looking for ways to reduce our global dependence on Aramco’s core product: oil.

Aramco is pursuing a 3-pronged strategy to address the expected impacts of climate change.

First, Aramco is focused on funding research and development of technologies that eliminate or repurpose CO2 for beneficial products, create energy efficiency in end markets, and replace non-oil based sources of GHG’s [4]:

Secondly, Saudi Aramco is taking a leadership role in creating partnerships to fund and support carbon management initiatives. In Jan 2014, the Oil and Gas Climate Initiative (OGCI) was created along with 9 other of the largest oil producers to share best practices and collaborate on ways to mitigate the causes of climate change.

Lastly, Aramco is seeking to diversify its financial ownership to increase its focus on improving operations. By IPO-ing, Aramco is forcing itself to increase its transparency and as a result will be subject to strong investor pressures to increase the efficiency of its operations, which will better prepare the business for declines in oil demand.

On the negative side, Aramco is incentivized to do everything it can to derail global climate change initiatives that would decrease oil consumption and not surprisingly, Aramco has been recorded as attempting to do so by adding roadblocks to slow negotiations, watering down policies, and using its influence with America and its allies in the Middle East [8].

Aramco should consider implementing the follow 3 strategies for further protecting itself from the expected effects on climate change:

[4] The Economist. 2016. Saudi Arabia is considering an IPO of Aramco, probably the world’s most valuable company | The Economist. [ONLINE] Available at: http://www.economist.com/news/middle-east-and-africa/21685529-biggest-oil-all-saudi-arabia-considering-ipo-aramco-probably. [Accessed 03 November 2016].

Nutella, Why U No Last Forever?