In 2006, Elon Musk outlined his vision to move our global energy consumption from mine-and-burn to solar. [1] 10 years later, Musk revisited this plan, highlighting the accomplishments of the strategy to move from luxury to the average consumer, the profits of which will be used to improve accessibility for consumers around the globe through infrastructure, urban passenger vehicles, and transport trucks. [2] The challenge lies in the scale at which Tesla is producing (Figure A), its ability to move a large population away from an entrenched US power grid, and that Tesla’s operations may be outpacing its own financial capabilities. 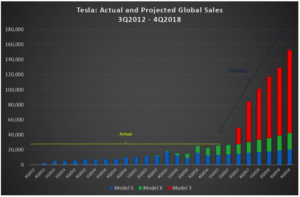 A common misconception facing Tesla is that carbon emissions generated from a gasoline-powered vehicle are simply transferred to the electric vehicle. The 1-ton battery in a Tesla, for example, nets 17.5 tons of CO2 when produced. Further, the Tesla vehicles use rare minerals and metals that are laborious to extract. However, a Tesla Roadster is still about two times more efficient than a gasoline vehicle of comparable class yielding an effective 76 MPG. There is a tradeoff: a Tesla purchased in the United States would require anywhere from 3-6 years of driving to surpass a gasoline vehicle in net carbon emissions. [4]

How can Tesla improve this metric? Tesla and Panasonic co-built the Gigafactory – a building with the largest footprint on the planet that produces more lithium-ion batteries than every other factory in the world combined! [5] Also, the two companies built a solar cell producing facility – a solar ‘Gigafactory’ – in 2017. [2] To maximize efficiency in its plants, Tesla acquired Grohmann Engineering, a leader in automated manufacturing systems, in 2016. [6] Musk has leveraged Tesla’s SolarCity merger to push new Tesla products: the PowerWall (residential) and the PowerPack (commercial) to serve as solar-powered energy systems with the aim of cutting dependence on the US power grid. [2] The US power grid relies on 65% fossil fuels [7] and as a result, plugging a Tesla in to a home in the Midwest (power grid is more coal dependent), for example, may yield a much lower efficiency compared to gasoline-based vehicles (see Figure B) – this illuminates the fact that a one-dimensional analysis of Tesla as an ‘efficient car’ is not enough and expanding the infrastructure – the Supercharging Stations – is essential. 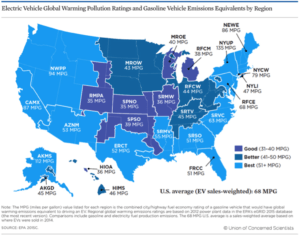 In a recent interview, Musk asserted that to completely take the globe off of the dirty power grid, he would require 100 gigafactories! [8] Tesla’s production aspirations are noble with the long-term goal of disrupting every aspect of the transportation industry (which contributes 25% of all carbon-based emissions). [9] However, this scale of battery production requires large sums of raw materials – perhaps the “bottleneck” of Tesla’s operations.

Cobalt, which is painstakingly extracted from the earth, is a major component in electric car batteries. 97% of cobalt production is a by-product of nickel and copper mining, and 60% of this production occurs in the Democratic Republic of Congo [10] – the per-capita income is $800, and mining production is rife with child labor and militia violence. [11] In a country with lax emissions regulations, processing Cobalt may be cheaper but it yields considerable pollution. Tesla has promised to produce 500,000 cars a year by 2018 requiring 6% of the world’s cobalt supply! Tesla has promised to source 100% of its cobalt from North America to assuage the ethical concerns in the DRC. The problem? North America currently sources 4% of the world’s cobalt and opening a new mine takes two to five years. [10, 12] Furthermore, the proliferation of battery and electric car manufacturers has skyrocketed demand for these materials – demand is expected to grow by a factor of 30 by 2030. [11] Scarcity and demand has yielded a price increase of $26,200 to $56,500 per ton of cobalt in the past year. [10] This same phenomenon is also true for lithium. [3]

Departing the reliance on African cobalt is a must. Musk will have to lobby for the expansion of mining operations in North America or the emergence of a Tesla joint venture in the mining industry, if feasible, seems in line with Elon Musk’s strategy. Fortunately, countries in Europe have already implemented legislation to ban gasoline-powered vehicles by 2040 and some by 2030 [11] but Tesla must focus on cost reduction, through their centralized plants, to increase accessibility (possibly introducing a cheaper model) to underdeveloped nations that are notorious for carbon emission production. Most notably, research into alternative batteries is essential to cut reliance on niche minerals that are in heavy demand from the tech behemoths.

Can Tesla grow as quickly as they posit considering their recent underperformance in Model 3 delivery? How can Tesla deliver given the scarcity of its raw materials? Will other car manufacturers join Tesla’s journey; what will it take?

The Digitalization of Costco: A Necessity to Compete with Amazon and Walmart