Tesla Motors, recently named the most innovative company in the world by Fortune Magazine[1] has captured the imagination of many becoming the first successful American car startup since Ford[2]. Based in Fremont, California, Tesla manufactures and sells electric luxury cars retailing between $70,000-100,000. For a car startup that’s only been in existence for about ten years, Tesla’s success is nothing short of a miracle. In recent market report, Tesla announced that it delivered 11,574 Model S sedans to customers in the third quarter of 2015 an increase of 48% from the same quarter last year. Building on the success of the Model S, Tesla’s second design, the Model X is set for delivery sometime in 2016 and is already oversubscribed[3]. Today, Tesla has a market capitalization of $25 billion and has taken the lead in the luxury sedan segment.

Tesla succeeded in the saturated automotive industry by first offering innovative product and breaking all the rules of the traditional industry. Traditionally, car manufacturers sell their cars through a network of dealerships who act as intermediaries between car manufacturers and consumers. By contrast, Tesla disrupted the market by completely bypassing the middlemen and going direct to consumers. Tesla sales orders are taken through its website and if customers want to see the cars in person, they can go to the company-owned show room style stores located in major cities all over the world (See Figure 1).

To support the growing demand for its electric cars, Tesla is building charge stations in major markets around the world. Tesla aims to cover 98% of the US population with its charging network by end of 2015. Typically, customers can fully recharge their Model S in less than 20 minutes at these supercharge stations[4]. As consumers gain better access to charge stations, the barrier for purchasing electric cars will be minimized (See Figure 2).

Unlike most car manufacturers, Tesla makes most of the components in-house. This strategy has helped Tesla achieve impressive quality standards while reducing costs. Because Tesla is vertically integrated, it can offer customers a unique opportunity to customize and configure each Model S cars to their tastes. To gain additional manufacturing efficiencies, Tesla is building a huge factory that will manufacture lithium-ion batteries further differentiating it from competing manufacturers. This move could save Tesla a lot of money since 25% of the cost of making a car is related to batteries. The company hopes to reinvest the additional margins gained from these types of investments to reach its business strategy of making a more affordable Tesla starting at $35,0005.

Staying true to its Silicon Valley roots, Tesla leverages technology to achieve maximum efficiency in the manufacturing process and post market release updates. Unlike standard assembly robots in the auto industry that perform single task, Tesla’s factory has 160 advanced robots that can each perform four tasks in the assembly of the Model S. This level of automation is credited for Tesla’s higher profit margin in comparison to its competition4 (See Figure 3). Furthermore, Tesla vehicles are outfitted with a powerful computing system so much so that the Model S is referred to as “an app on four wheels”. This operating system allows Tesla to remotely diagnose any problems that may arise and also update the operating system. 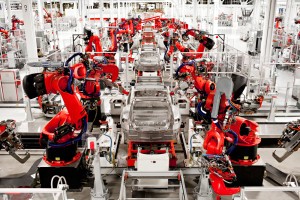 Utilizing these technological innovations, Tesla continues to gain competitive advantage. Traditionally, automakers release new models with added features every two to three years. Tesla on the other hand is able to perform these types of updates via software. For example, Tesla recently remotely shipped self-driving features to the Tesla Model S 70D cars [5].  Without having to invest in production of new models, Tesla is able to generate additional revenue by charging customers for these software updates, which could cost as high as $10,000.

Tesla has adopted an effective operating model that will continue to sustain its business model for many years to come. Tesla’s CEO Elon Musk envisions his company to not only dominate the luxury car segment but also transform the automotive industry as a whole. In line with this vision, the company released all of the patents related to electric cars effectively making them open source. In response to skeptics Musk said, “What we are doing is a modest thing. You want to be innovating so fast that you invalidate your prior patents, in terms of what really matters. It’s the velocity of innovation that matters”4.

How Empire Created Its Empire

Akindo Sushiro: Tasty Sushi for All at $1 per plate