“We can break our dependence on oil…and become the first country to have one million electric vehicles on the road by 2015. [1]” – Barack Obama

The impact of pollution is severe, and a 2011 study by MIT found that automobile emissions cause 53,000 premature deaths in the United States every year [2]. Approximately 99% of carbon in auto fuel is emitted as CO2 when burned in an engine and these greenhouse gases harm the environment [3]. In order to combat pollution, in 2009 President Obama revitalized the ‘Recovery Act’ by offering billions of dollars in tax credits to clean energy companies [4]. To specifically tackle auto emissions $2.4 Billion in funding was dedicated to subsidize development and innovation in the electric vehicle (EV) market [5]. Specifically, the Department of Energy dedicated $1.5B to focus on the development of batteries and $900M on the development of EV’s [6].

The tax credits were designed to incentive the rapid growth of the EV industry. As evidenced by the specific areas covered under the Recovery Act, the three major areas pinpointed by the U.S. government for large scale EV innovation were batteries, vehicle production, and charging stations.

In 2003, Elon Musk incorporated ‘Tesla Motors’, a company on a mission to “accelerate the world’s transition to sustainable transport” [7]. Tesla grew rapidly by mixing stylish designs with true EV innovations. Musk saw the opportunity to build a new type of auto company invested in a gasoline free future for automobiles. Today, Tesla has positioned itself as a market leader in innovation and social good. 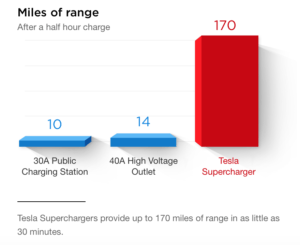 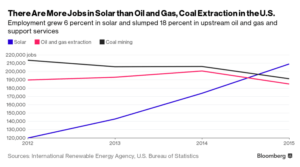 By innovating in electric vehicles, lithium-ion batteries, solar panels, and charging stations, Tesla is positioning itself to profit from societal efforts to reduce emissions. Advantageously, climate change is compelling governments to provide subsidies and incentives to the clean energy industry. This trend impacted Tesla’s operating model by fostering an opportunity for rapid industry expansion. Tesla’s investments are an attempt to position the company as a clear powerhouse in clean energy. This is a viable long-term business model. Bloomberg Business estimates that by 2040, electric vehicles will account for 35% of all new vehicle sales. They attribute the majority of this growth to innovations in lithium-ion batteries [20]. 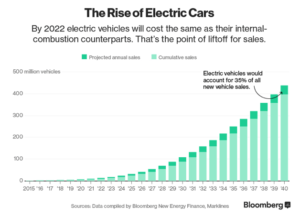 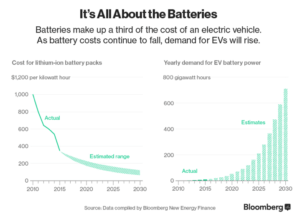 There are additional steps that Tesla could implement to pursue its mission of sustainable transportation.

[20] Tom Randall, “Here’s How Electric Cars Will Cause The Next Oil Crisis.”, Bloomberg, http://www.bloomberg.com/features/2016-ev-oil-crisis/, Accessed November 2016.

Alevo: Swimming Against the Current

The Anti-Organic: Super Salmon for Dinner

Student comments on “Tesla and the Electric Vehicle Revolution”