Much like how Uber matches drivers and passengers, Rubicon’s mobile and web-based platform matches 5,000 independent waste haulers with businesses that want to dispose of industrial trash, and recommends pick up routes based on location and waste-type [1].

The $65 billion U.S. waste and recycling market has historically been slow to leverage technology. Although the activity of waste collection is highly localized, the market is dominated by national behemoths Waste Management and Republic Services, and the rest of the market is highly fragmented among small independent haulers who many only own five to ten trucks, and service a 20 to 30-mile radius [2].  By introducing technology to create an online marketplace, Rubicon’s has built out a network of haulers that can service all markets individually, creating greater efficiency and competition in the system, driving down costs for customers and increasing access to jobs for suppliers [3].

Rubicon estimates that it can deliver 20-30% in cost savings for waste disposal. Historically, a company like Home Depot would use one disposal company across all its locations. With Rubicon’s network, national chains can now disaggregate the jobs for each location, allowing each to choose from a wider pool of vendors. With a few swipes on a tablet/phone, the business schedules a pick-up on-demand. Vendors then offer increasing low cost bids for a specific job until Rubicon chooses a vendor that meets the job complexity and speed requirements at the best price [4]. The increased competition lowers the cost of the job.

In addition, sending waste to be recycled / reused is cheaper than sending it to a landfill. Rubicon consults businesses on how to maximize their recycling streams, by tapping into its extensive recycling vendor network to find new uses for waste. In one example, it helped a large retailer turn its trash bill into a revenue-generator, by reselling the cardboard boxes that merchandise arrived in to a paper mill [5]. This work has the broader societal benefit of improving sustainability in the manufacturing process by increasing the proportion of end-of-life materials that are repurposed. 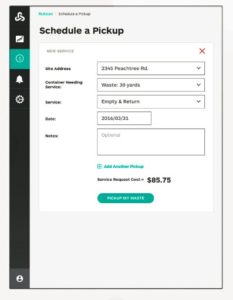 Another piece of Rubicon’s value proposition is in providing data analytics. Within the app, Rubicon organizes the invoices and recycling rebates in each transaction on a user-friendly interface, allowing businesses to visually track the details on all-in waste and recycling costs [6]. 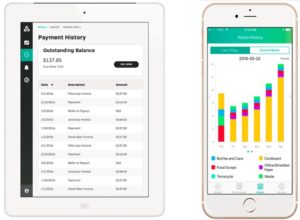 Rubicon’s software enhances a lot of logistical challenges for smaller independent waste vendors. It helps haulers build optimized routes and increase utilization of their truck fleet in real time. For example, rather than running several half-filled tracks, their scheduling system helps haulers rightsize the frequency of trips to maximize the percentage of full truck loads. Also, as all payments are handled electronically through the app, a paperless back office reduces costs and improves speed of payments [7]. 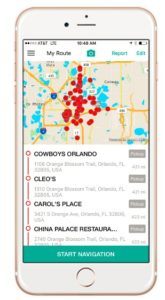 The network effects of having such a large pool of haulers in turn attracts a wide base of customers – much like the Uber case, haulers are attracted to the platform because it gives them access to more customers, particularly the local accounts of national chains which they would not have been able to service previously due to limited scale. There are additional benefits to becoming a Rubicon member: Rubicon aggregates the buying power of all its independent haulers to help them buy supplies such as fuel, equipment and smartphones at a discounted price through industry discounts and strategic partnership [8]. It also offers flexible lines of credit / term loans from $500,000 to $5M to help haulers grow their businesses [9].

The company tripled its revenue in the last year [10], and has over ~$100M from venture capitalists (including Leo DiCaprio and former Uber executives) to scale the business [11]. It currently generates revenue from taking a cut of each pickup depending on the size of the pickup and the trash composition, as well as a portion of any incremental savings it brings to businesses by redirecting more waste towards recycling [11]. I believe Rubicon should make use of new developments in “Internet of Things” to drive additional cost efficiencies, such as automating more of the trash sorting and pickup operations. For example, a Finnish company called Enevo has been fitting dumpsters with sensors to detect when the bin is full and sending out messages for pickup [12]. The more Rubicon can find new ways to save businesses and haulers more money in their waste disposal process, the more Rubicon can attract new users and become a more valuable network. 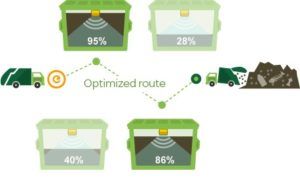 [9] “Rubicon Global Announces Innovative Financing Program for Its Hauler Network Through Partnership with The Credit Junction”, The Jerusalem Post, September 8, 2016

Hasbro Is Not Leaving Monopoly to Chance