The first known patent for a gas turbine engine was granted to John Barber in 1791, but it could not be manufactured due to limitations in manufacture and metallurgy.  The idea was resurrected in the early 1900s but was tabled until the 1930s when the performance limits of piston engine-driven propeller aircraft were reached.  Early jet engines were inefficient, mechanically overly complex, and unreliable; it was not until the 1970s that high-bypass turbo fan engines allowed high-speed, high-altitude flight to bring safe, economical travel to the masses.[1]

General Electric Aviation is one of the top three manufacturers of commercial jet engines in the world and the most modern manufacturing technique available—additive manufacturing or 3-D printing—is enabling great leaps in design and engineering.  This process is so important to design because the fluids (fuel and air) in a turbine engine have unlimited ability to move around.  However, even though engineers could envision 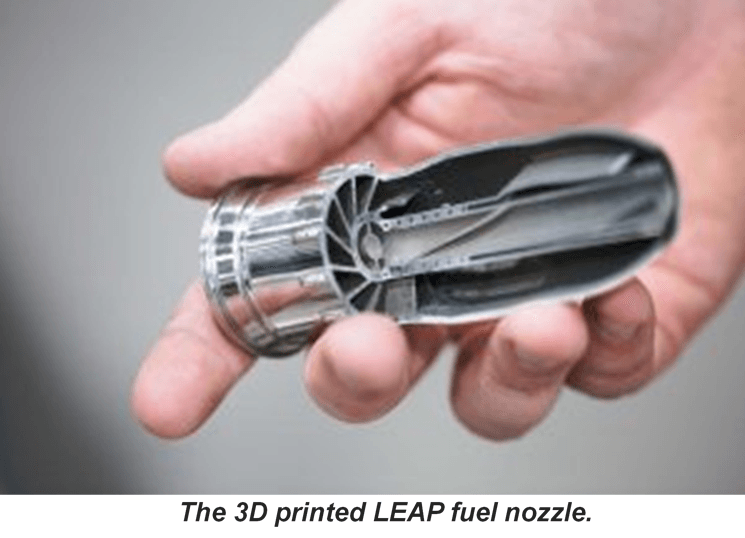 and design more efficient flows, they could not be achieved because of the limits of subtractive and cast manufacturing.[2]  The most notable example of this is the LEAP engine fuel nozzle; 3D printing allowed the number of parts to be reduced from 20 to just 1 and the weight was cut by about 25 percent.[3][4]  The weight to performance ratio of jet aircraft parts is crucially important to long-term viability of aircraft because fuel burn increases by 3-5% per hour for each extra unit of weight carried.[5] This can result in up to 40% of the unnecessary weight for a wide-body long-haul flight or a redundant 20,000 pounds of fuel.

Since the integration of additive manufacturing to the production process, the management of General Electric Aviation has made significant changes to the supply chain.[6]  Additive manufacturing is much less labor-intensive than subtractive manufacturing and, therefore, labor arbitrage through offshoring is less of an issue.  As of October 2018, 230 plant employees had produced 30,000 LEAP engine fuel nozzles on 40 3D printers since 2015.[7]  At least in part because of this new trend, GE announced the creation of two million square feet of new manufacturing floor space at five new plants—all in the US states of Mississippi, North Carolina, Indiana, and Alabama—to be phased in over five years.  In 2016, General Electric management aimed to capitalize on GE Aviation’s lead in additive manufacturing by creating a new commercial division, GE Additive, with the growth target of $1 billion by 2020.[8 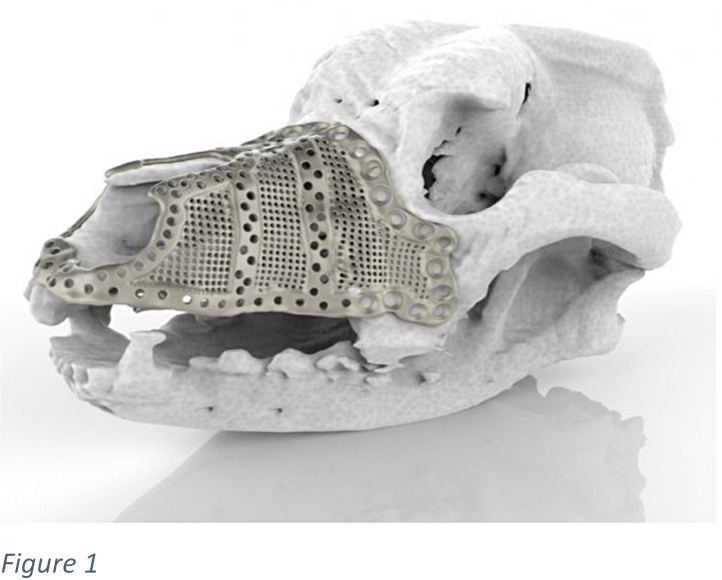 Going forward, General Electric Aviation should attempt to fully capitalize on the promises of additive manufacturing with respect to the internals of aircraft engine parts.  Specifically, it appears possible to replicate the internal structure of birds’ bones (porous with interconnecting stabilizing material) inside of metal additive-manufactured parts (see figure 2).[9] [10]  GE Aviation engineers should reconsider almost every plastic or metal component within an aircraft engine and determine whether savings can be made.  Since this should be an exhaustive study, they should first focus their efforts on the heaviest, most complex, and highest stress parts and gradually work their way towards parts with less potential for economization.  Combining carbon fiber technology with additive manufacturing of metals and plastics within the highly-complex turbine engine of an aircraft can potentially yield a myriad of performance gains—gains for which aircraft manufacturers and operators alike will be willing to pay a premium.

With respect to General Electric and GE Aviation specifically, there are several open questions.  Which components on an aircraft engine will yield performance or production benefits from additive manufacturing processes?  What engineering cost for these reengineered parts can be passed along to the purchasers?  What is the break-even number for each part between additive and subtractive manufacturing when both options are viable?  Is it feasible to reconsider every part, component, and subcomponent of a jet engine and is there capacity for all that additive manufacturing?  Do these parts last as long in the real world under unforeseen circumstances? (794 words)

[4] “GE Now a User and a Major Seller of AM Technology.” Advanced Manufacturing, 11 July 2017, advancedmanufacturing.org/ge-now-user-major-seller-technology/.

[5] “How Much Fuel Is Burned to Carry the Trip Fuel?” Aviation Stack Exchange, aviation.stackexchange.com/questions/39513/how-much-fuel-is-burned-to-carry-the-trip-fuel/44496.

[10] “Additive Manufacturing Gets Close to the Bone.” Design Engineering, www.design-engineering.com/features/additive-manufacturing-gets-close-bone/.

3D-printed razor handles – the best a man can get?

Student comments on Taking to the Skies with 3D Printed Jet Engines? GE Aviation Already is