Petrochemicals, commonly in the form of plastics we use in everyday life, are converted from Oil & Gas, which are commonly associated with pollution and climate change. That doesn’t sound so environmentally friendly, doesn’t it? What if I told you that plastics can be created from agricultural products such as corn or even naturally occurring plants like grass. This might not be news to some people but corporations around the world are already moving towards turning biological resources into plastics, commonly called “Bioplastics”. PTT Plc, the Thai national oil company is also an increasingly significant player in making the revolution, and from my experience in business development at PTT, working to shift into new businesses, I can show you a more “Bio” future.

Impact of Climate Change To Business

Climate change is a real issue in today’s world, as emphasized by the Paris Agreement on climate change, and fossil fuels are generally perceived as the major culprit. PTT, a company largely based on fossil fuels, is definitely not free from blame and is increasingly expected to be a major part of the solution. Emissions reduction to keep the climate change crisis from accelerating can be done by cutting fossil fuel consumption. This pressure is coupled with the fact that Thailand’s fossil fuel reserves (mainly natural gas) is dwindling [1]. An apparent solution is accelerating to shift away from fossil fuels and that is exactly what PTT intends to do as a way forward. Climate change is not only a threat but also an opportunity. The same pressure to move away from fossil fuels is spurring demand for bioplastics. Bioplastics also serve another environmental purpose which is plastic waste. Global bioplastics production is expected to quadruple from 2014 to 2019 and it certainly won’t stop there (Exhibit 1) [2]. 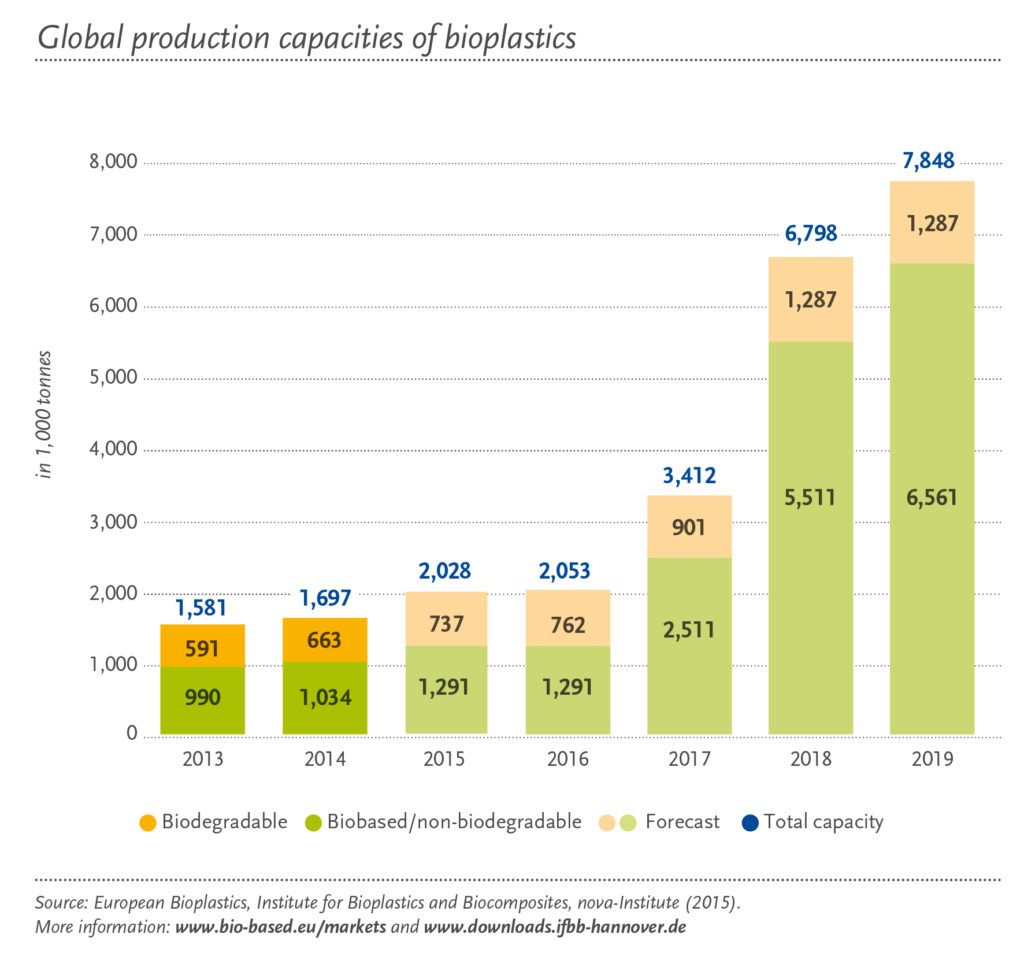 PTT has already made the first big move in creating a joint venture with Mitsubushi Chemical Company, Japan’s chemical giant, to be the global largest producer of bio-based Polybutylene Succinate (BioPBS), a bioplastic intended to replace conventional fossil fuel derived clear flexible bags and films. BioPBS is created from bio-based material and is naturally compostable without using a composting facility [3]. PTT will not settle with only product and aims to be a much more prominent player in the bioplastics field. This intention is aligned with the government of Thailand’s decision to include the bioplastics industry as part of the “super clusters” of promoted investments, paving the way for even more developments [4].

To be a successful player in the highly uncertain and price sensitive field of bioplastics, a strong commitment to create supporting infrastructure as a competitive advantage is critical. A way forward for PTT, which I have personally worked on to include in company strategy, is to be directly involved in building a strong “Bioeconomy” for Thailand. Bioeconomy is the concept of using biotechnology in improving industries, namely agriculture, energy, and chemicals. The efficiency of the agriculture production is directly linked to bioplastics production as agricultural products is the major raw material. Thus, to be successful at bioplastics, multiple aspects of the bioeconomy, especially agriculture, must flourish as well. Future businesses in even higher-value industries such as pharmaceuticals can be unlocked from having a strong bioeconomy as well. As the national oil company, PTT is obligated to and is fit to spearhead Thailand’s bioeconomy creation.