Darden Restaurants Inc. is the proud owner of a diverse portfolio of well-recognized restaurants to include Olive Garden, LongHorn Steak House, and Bahama Breez. With over 1,500 restaurants and 150,000 employees, Darden has long considered itself a forerunner when it comes to optimizing the use of technology in the casual dining industry [1]. So, when it came time for another point-of-sale (POS) upgrade in 2014, they were particularly looking for a transformative digital system that had the potential of creating enormous value for both their restaurants and their customers.

Emergence of Digital Technology in Restaurants

The crux of any restaurant is the menu, and this historically paper-based document has long been the main lever for restauranteurs to influence consumer purchases. It was only natural that this transaction emerged as one of the focus areas for the introduction of digital technology [2]. By the late 2000’s, restaurants across the world were experimenting with electronic menus on tablets and the feedback was resoundingly positive. Studies indicated that the digital version not only “improved customer service, … [but also] boosted sales [3].”

In late 2014, after viewing the initial successes of digital menus and having felt the benefits of prior digital POS systems, Darden decided it was time to incorporate a new product from the tech startup, Ziosk. Ziosk had merged the two technologies and created a table-side kiosk, which not only allowed the customer to browse a menu, but it also offered the ability to digitally place the order and pay. Darden made the agreement with Ziosk in April of 2015, and rolled-out the upgrade in its Olive Garden restaurant chain, 800-plus stores in total [4]. 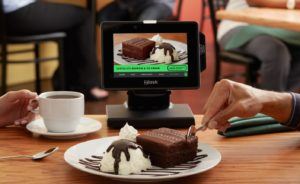 Olive Garden’s previous operating model was traditional in nature with the wait staff at the center of all communication between the customer and the restaurant. Waiters and waitresses took the orders, inputted them into a digital POS, which then transferred the orders to the kitchen. They were also responsible for collecting payments. Even the best wait staff felt the tension of servicing all of these needs at once. It often left either an abundance of labor or disgruntled consumers. The Ziosk table-top kiosk fulfilled all of these needs in one.

Costumers could now arrive to their table and place an order on-demand. Orders were transferred digitally directly to the kitchen without the inevitable lag of an intermediary. Food and drinks were equally as simple. Furthermore, the bill was developed digitally on the kiosk as orders were placed, and payments were as easy as swiping a credit card. Customers then had the option of receiving a digital or paper bill.

Olive Garden anticipated many perks from this updated system. First, the kiosk offered the same benefits of a digital menu. They could update the menu frequently and effectively account for mass-customer preferences and supply. Second, with the increased efficiencies in the ordering process, the restaurant could now do more with less labor, significantly decreasing their operating costs. Lastly, the kiosk provided an expedient method for customers to enroll in the revenue-producing loyalty programs [5]. The Ziosk product offered an array of value that was previously inaccessible. Initial reports showed an increase in dollars spent per order and an average drop of 10 minutes in time spent by customers at a table [6]. 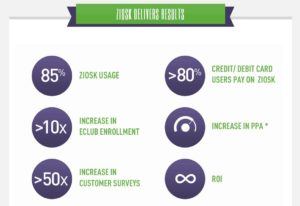 Such abundant changes do not come without its fair share of risks. Though Olive Garden would assert that this system allows their “team members to … provide a more personalized service [7],” it would be negligent to assume that there is not some type of psychological connection to the traditional operating model. There is risk in curbing any consumer perception, and Olive Garden will certainly have to devote some capital to accomplishing such a change successfully. In addition, they must pay close attention to the incomes of their wait staff. It may be necessary for them to adjust their incentive structure if they begin to make less on tips as the result of customers perceiving the kiosk as adding most of the value.

Despite the challenges, this addition of digital technology is most likely a win-win. Though 85% of customers are using the kiosk [8], by no means has Olive Garden made it mandatory. As a result, they were able to tap into the value the technology offers, while also providing the same traditional method that a segment of customers still prefers.

In conclusion, it is important to note that there is still further value to be created with this technology. Similar to other digital products, this kiosk is producing a vast quantity of data that could be used to further exemplify customer service. Imagine arriving at a table with your preferred drink already waiting for you or receiving a menu specifically made to meet your individual preferences. All of this is in the future for Darden and its restaurant portfolio.

Are smart cribs the solution for exhausted parents?

Student comments on Table-Top Kiosks: The Future of Restaurant Point of Sale Systems