Alcoa is a Pittsburgh based company that manufactures lightweight metals, primarily aluminum and aluminum based products.  Alcoa has been a leader in aluminum production for over 130 years, and is also a sustainability leader in the lightweight metals industry. The process of manufacturing aluminum requires extracting bauxite ore and refining it into alumina, which is then smelted into aluminum. Every stage in the aluminum manufacturing process is extremely energy intensive, and emits significant amounts of greenhouse gasses [1]. Most climate scientists agree that the greenhouse effect, caused by these emissions, is a main cause in global warming. With climate change becoming more and more prevalent in government policies and regulations, companies such as Alcoa are under intense scrutiny by both corporations and consumers to continually decrease their greenhouse gas emissions and provide strategies for increased sustainability.

The main authority for regulating greenhouse gases and other pollution controls is the Environmental Protection Agency (EPA). The EPA creates regulations and enforces them under the authority of the Clean Air Act, a law written by Congress to control air pollution on a national level. Despite being an environmentally conscious company within the industry, EPA violations have forced Alcoa to perform billions of dollars of work to clean sites or reduce pollution [5]. The EPA has several regulations and guidelines specifically written for aluminum production, forcing the industry to take environmental concerns seriously.

With the intent of decreasing their carbon footprint, Alcoa is continuously setting aggressive goals around sustainability, and often exceeding their own expectations. Alcoa reported in 2005 that for every ton of production, 20.27 metric tons of carbon dioxide were emitted. [2] Their goal was to decrease emission by 30% from the 2005 baseline by the year 2020, and they achieved their target 5 years early, reducing emissions by 5.5 million metric tons, a 31.3% decrease. In 2016, Dow Jones Sustainability Indices named Alcoa one of the world’s leading companies in sustainability for the fifteenth year in a row.  [3] 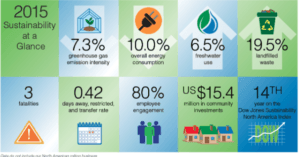 The company strives to be net-positive, meaning that the greenhouses gases that are avoided by incorporating aluminum into products should exceed the gases emitted in its manufacturing. As a lightweight metal, the use of aluminum in the aerospace and automotive industry creates lighter and more fuel-efficient products. Aluminum that is incorporated in buildings can improve energy-efficiency and aid other companies focusing on sustainability. Aluminum is also indefinitely recyclable, and Alcoa has invested $7.3 million in recycling initiatives over the last 8 years.

In 2015, the Obama Administration created the American Business Act on Climate Pledge. Alcoa was one of 73 companies to announce commitments to climate action, and convey support for a strong outcome in the COP21 Paris climate negotiations. Alcoa pledged that by 2025, they would reduce their greenhouse gas emission by 50% of the 2005 baseline, and demonstrate that the emission reduction from the use of their products would be three times more than the emissions created during production of their products [4]. As a leader in aluminum production, Alcoa has the power to influence other companies to follow their lead in committing to such ambitious goals. They are consistently being recognized for their sustainability initiatives, and force other companies to prioritize environmental concerns to stay competitive.

I think that Alcoa also has a unique opportunity to leverage their reputation as a sustainable company to partner with other manufacturers looking to go green.  Partnerships with other companies with the intent of becoming more sustainable would both increase business and get them closer to their net-positive commitment.

I would also suggest that Alcoa focus on the byproducts of their manufacturing process.  While decreasing emission rates has been ahead of schedule, the landfill goals have been lagging. As shown in Figure 1, Alcoa saw an increase in landfill waste by 19.5%. Figure 2 shows Alcoa’s goal for landfill waste, as well as their trends for the last few years.  Besides an initial drop, there has not been a significant improvement in this aspect of the manufacturing.  Many of the violations from the EPA are the result of generated waste materials at their facilities. Alcoa is well known for their significant improvements in air pollution, but should place more emphasis on the areas that are not improving and that continue to contaminate rives and take up space in landfills. 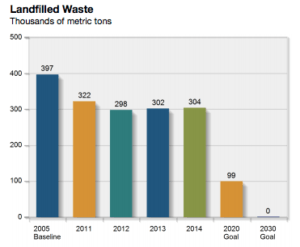 For NextEra, North Dakota Wind is the New Fracking

2 thoughts on “Sustainability in the Steel City: Alcoa Aluminum”