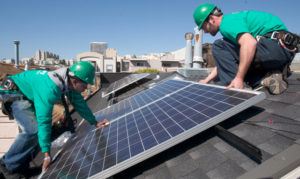 SolarCity’s Mission: Protecting Your Wallet and Our Planet

SolarCity offers a simple value proposition of lowering its customers’ energy bills by providing solar energy solutions for little to no initial investment. Sounds like a win-win, right? Any rational consumer loves saving money – particularly in situations where spending less money for a given service (electricity) does not compromise the perception of value delivered to the consumer.

Washington is taking the issue of climate change quite seriously: on October 3, 2015, President Obama and the EPA announced the Clean Power Plan – a historic and critical step in reducing carbon pollution from the power sector. The Plan requires a 32% reduction in the sector’s carbon pollution within fifteen years.[1] As America’s #1 vertically integrated provider of residential and commercial solar energy solutions, SolarCity has been a clear beneficiary of the nation’s newly energized conversation around sustainability. The numbers also seem to support this thesis – given the most recent publicly available data, the company maintained 35% market share of the residential distributed solar installation market.[2]

Is the Business Model as Sustainable as the Energy Source?

In the United States, federal, state and local governments collaborate with public utility providers to determine policies and regulations that directly or indirectly impact the price of electricity. One key driver of SolaryCity’s value-creating abilities concerns a regulatory policy known as “net metering”, which currently exists in 41 states.[3] Net metering is a billing system that credits individual customers for the full retail value of the electricity that their system generates. The idea is that since your solar panels will typically produce more energy than you will consume during a given period, you should only pay the difference – or the net amount – and sell the rest back to the grid.

A second, more explicit subsidy, known as the solar Investment Tax Credit (ITC), is also instrumental to the viability of the SolarCity business model. The ITC currently offers a 30% federal subsidy to tax equity investors in solar projects – Congress recently extended the policy through the end of 2019, after which it will taper off to 10%.[4] This is truly a game changer: By 2020, the U.S. will be installing 20 GW of solar capacity each year (to put this in perspective, at the end of 2014, 20 GW was the total amount of solar that the country had installed in its history)![5] As a result of the multi-year ITC extension, solar prices are forecasted to decline while installation rates and technological efficiencies will rise over time.

Over the last few years, SolarCity has taken strategic moves to vertically-integrate its supply chain through acquisition. These steps have helped optimize the company’s cost structure (lowering cost per watt), but they alone are not sufficient to generate attractive returns on invested capital without some sort of subsidization. Critics assert that in the absence of tax policy loopholes such as the ITC, SolarCity’s model would no longer be sustainable.

Can Elon Save the Day?

On July 31, 2016, SolarCity entered an agreement to merge with Tesla Motors, in a $2.6-billion all-stock deal, subject to shareholder approval.[6] It is important to recognize that brothers Lyndon (CEO) and Peter (COO) Rive co-founded SolarCity in 2006, along with their cousin Elon Musk, who serves as Chairman of SolarCity AND Tesla. In many ways, the future of SolarCity is inextricably linked to that of Tesla – both companies share Musk as a visionary leader and ‘key man’ stakeholder. Tesla’s decision to acquire SolarCity is predicated on the assumption that there is a longer-term, value-creating opportunity to reduce dependence on national grid interconnections by localizing renewable energy through a Tesla / SolarCity partnership. ‘But what do cars have in common with solar cells and backup battery systems?’ you might ask. The next step is to go “off the grid” entirely, by using solar cell systems to generate energy which can do anything from power a home or re-charge an automobile. Storage is essentially the buffer by which consumers can reliably ensure that they have access to energy 24 hours a day, even when the sun isn’t shining. In a surprise move, Institutional Shareholder Services (ISS), an influential shareholder proxy service, said today that it believes the deal makes strategic sense for both parties, and should be approved.[7]

Perhaps sunny days do lie ahead for SolarCity.

Thanks To Climate Change, The World Is Not Your Oyster

10 thoughts on “Sunny Days Ahead for SolarCity?”