Suning Commerce Group is one of the largest retailers in China with more than 1600 stores covering over 700 cities of Mainland China, selling home appliances, consumer electronics and general merchandises. In 2015, Suning generated sales close to $20B and attracted $4.5B strategical investment from e-commerce giant Alibaba. 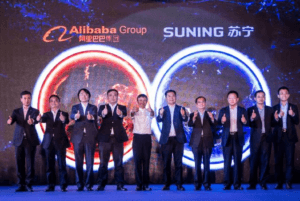 Suning was founded in early 1990’s as a single brick and mortar retail store in Nanjing selling and installing air conditioners. The business quickly expanded nationwide over the next decade and offered a range of retail products. It became the go-to place for most Chinese consumers shopping for a refrigerator, or a TV. By late 2000’s, e-commerce giants such as Alibaba and JD.com started to market heavily on home appliances and consumer electronics. Because these companies do not have to bear the cost of running a physical retail store, they can offer significant discount compared to Suning. Consumers flocked to e-commerce platforms. Thus, Suning sales and stock price plunged 60% in one year.

Suning countered by building their own multi-billion dollar e-commerce platform by partnering with IBM in 2011. However, consumers were slow to buy in because the traditional retail stores lack the professional focuses of an internet company. Several factors such as slow logistics and delivery, unattractive price and lack of differentiation contributed to its under-performance. For example, Suning kept its original distribution network by outsourcing while JD.com has its own distribution division which promised faster and better customer service. In addition, Suning can’t differentiate its price advantage by offering same price for both online and offline. Even in areas such as post-sale service where Suning had an advantage, was eroded by e-commerce company subsidizing service to original manufacturers. In a nutshell, Suning struggled to find its place amid the invasion of e-commerce. The growth of its online business was not enough to offset the decline in offline business. Should Suning keep its offline roots or go online?

In 2012, Suning and JD.com waged a highly publicized price war against each other. JD.com publicly announced zero gross margin within three years and promised their home appliances will always be 10% cheaper than Suning. Suning countered by announcing everything it sells will be cheaper than JD.com. In the end, neither parties held their promises even though the sales were significant. It was a price war with no winner.

The battle got Suning to reflect on its strategy. Born in the old-economy, in a way it over-reacted to the challenge posted by the internet wave and just tried to be the internet company. Instead, Suning has its unique position in the following areas:

It took several years for Suning to find the right strategy when conflicted with powerful new technology and new business model. The initial reaction of simply follow the same business model did not work for Suning. Instead, Suning has proven that embracing new technology while making full use of its own root and advantage is a better way to create a unique model that works. In 2015, Suning sold 20% of its share to e-commerce giant Alibaba as a strategic move. It has repositioned itself as a combination of “Walmart + Amazon”. While it remains to be seen how successful the new business model can be, Suning has embarked on a journey by constantly adapting to the ever-changing world with new technology.

Software updates for your car? Tesla is paving the way.