In the Southern Region of Malawi, drought resistant plants such as cotton and sorghum have long been important crops for the struggling, agriculture-based local economy. Today in the Balaka district of Malawi, these crops and others like maize, groundnuts and cassava, are among the most popular seeds to plant for the average smallholder farmer. Unlike the Central and Northern Regions of the country, where many choose tobacco, tea, sugar or coffee, the people of Balaka are forced to go for the lower per-hectare earners due to the hot and dry climate.

Toleza Agricultural Enterprises is a company that owns and manages private estates with a variety of agricultural businesses such as livestock, agronomy, bio-fuel production, and cotton processing. One such estate is Toleza Farm [2], which is located in the middle of the Balaka district, and like many of the local people in the region, it focuses on crops that are suited to the weather conditions in the area. A long-time employee of Toleza recalls: “The rains have always come in the middle of November and stayed with us till late March. We don’t get much rainfall but with the sun providing the afternoon heat after the morning rain, these are good conditions for growing maize and cotton”. Figure 1 shows average rainfall between 2000 and 2012.

In recent years, however, the rain gods have not been kind to the people of Malawi, who in 2013 waited till mid-January for planting rains. In 2014, much of the Southern Region received over 1,000 millimeters of rainfall (above annual average annual) within a 2-week period, leading to intense flooding, soil erosion, poor crop yields, and food shortages. [4]

Climate change awareness is not very high in Malawi, however, Toleza management had noted the risks it presents, and has started mitigating these risks through various initiatives.

Conservation tillage – Soil cultivation method in which the crop residue is left on fields before planting the next crop in order to reduce soil erosion and rain-water runoff, see Figure 2. 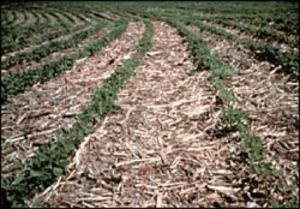 Increased irrigation hectarage – Toleza made an investment in irrigation equipment taking the total irrigated area from less than 10 hectares to over 50 hectares in two years.

Investment in road network – Toleza revamped its road network to allow truck access to the estate and ensure continued operations even in the event of a tropical storm.

As a major grower in a country with an average farm size of less than 1.5 hectares, for Toleza, climate change presents an opportunity to increase the significance of its role as a producer of food. Most farms will not able to make the large investments required to mitigate the risks associated with the crescendo of unpredictable weather that may lay ahead.

In addition to the steps described above, there are several other points that Toleza could consider as it attempts to ensure its sustainability through the effects of climate change:

Diversifying by investing in land in more favourable growing areas – At the moment the enterprise has around 2,500 hectares of land across three locations, two of which are within Balaka and one in the Central Region of Malawi. Further investment in additional land is in the plan, however, the company should try to de-risk its investment by acquiring land in more diversified locations.

Focusing more resource on growing the Livestock business – Whilst droughts and floods are bad for all agriculture business, the effects are amplified in agronomy relative to livestock, which currently accounts for less than 20% of the overall business.

Transition processing business units to use purchased rather than produced goods – To take away the risk associated with challenges of growing crops, the cotton ginnery, sunflower seed oil mill, and maize mill, could all run on agriculture produce that is purchased from other farmers rather than grown. Though the price of this inventory would be higher, production risks will be reduced.

Despite the challenges of changing weather patterns on agriculture in Malawi, Toleza remains in a good position to capitalize on its scale and mitigate climate change risk. The question that comes to mind, is how much more innovative will the agricultural sector in Sub-Saharan Africa have to be in the future? Far more urgent however, is how do the smallholders ensure they do not fall behind.

Exxon Mobil and the public showdown!

Student comments on Sub-Saharan Agriculture: Insult is added to injury in Malawi as unpredictable weather patterns devastate hopes for a decent harvest.