Forecasts of the % mix of fossil fuels in total power consumption by 2050 vary widely: from 0% in some countries to a much more conservative 85%. The answer will depend partly on decisions by governments to curb greenhouse gas emissions and partly on the speed of innovation in the renewable energy sector.

BP is a behemoth of the oil & gas industry: the 10th largest company in the world with an annual revenue of $226 billion in 2015. Its future, however, depends on fossil fuel demand going forward as well as BP’s own ability to adapt. Recognizing the imminent changes to the energy sector, BP’s board decided in 2015 to require an ongoing report on how BP is preparing for a lower-carbon future.

BP’s lower-carbon future is primarily based on a shift from oil to natural gas, and, to a lesser extent, investments into wind power, biofuels, and other renewables research. In 2015, BP wind farms produced enough energy to power roughly 1/3 of Hawaii (4,425 GWh), while its 2015 biofuel production could power all US cars for only half a day (795 million liters). In comparison to its oil & gas business, these numbers are largely insignificant.

For BP right now, however, it makes sense to limit investment into renewables, while still staying abreast of the innovations happening. In 2015 renewables accounted for only ~3% of total power consumption, and BP project that share to increase to only 9% by 2035.

Uncertainty in how the shift from fossil fuel to renewable energy will occur, however, is a significant challenge. Oil and gas production require highly capital-intensive, long-term investments. The NPV of these investments depends heavily on the demand and supply – and thus price – of oil. The current oil prices are a testament to the difficulty in forecasting and the intense shocks they produce. BP and other oil companies have had to lay e.g. deep-sea projects idle and/or divest entirely, losing a lot of money in the process. The implications have been dire for the oil companies, but also for the countries in which the drilling has taken place. Recognizing that a shift to renewables can produce similar demand/supply issues, BP has started to incorporate a forecasted carbon cost into their investment decisions.

BP’s greatest response to climate change is a shift in portfolio allocation from oil to more natural gas. Though natural gas already plays a big role at BP, a shift still presents operational challenges. Technology and equipment needs between oil and gas vary throughout the supply chain, from extraction to transportation to retailing.

Much more operationally challenging, however, would be a potential shift from oil & gas to renewables. Wind power is an entirely different business, and requires fundamental changes to labor and technology expertise. Meanwhile, biofuel is currently based on a partnership model with DuPont, which is a shift in itself for BP who typically owns its entire supply chain.

Separate from the question of renewables vs. fossil fuels, BP is already keenly aware of the negative effects of climate change on its current core business. New pipelines are being placed deeper underground to avoid damage due to flooding, and equipment is being upgraded to withstand higher temperatures in certain regions. In an already risky environment, these additional levels of precaution add variability and cost.

Should BP be doing more to secure themselves for the future? Probably yes, but the current low oil prices are in some sense simulating what a lower demand carbon future could look like, providing a good opportunity to reflect. Once oil prices recover a little, I would argue for increased investment into renewables, as well as to look at adjacencies in which they might leverage their expertise. If the future really is based on renewable energy, they may need to get creative: deep-sea and perhaps even asteroid mining; production and distribution of renewable energy; or, given their emphasis on biofuels, a move into agriculture.

BP is aware of the negative impacts of fossil fuels on climate change, but also recognize that currently their business is a vital driver to growing economic prosperity. Given future uncertainty they also, however, appreciate the importance of maintaining flexibility in their portfolio. Staying close to energy innovation will be key to BP’s continued success. 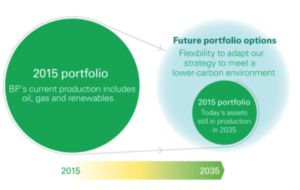 Monsanto will help lead the battle against climate change