Most casual observers will be hard-pressed to make sense of the latest member to receive permanent observer status to the Arctic Council, the intergovernmental forum responsible for promoting cooperation, coordination, and interaction among the Arctic States, as well as discussing issues concerning sustainable development and environmental protection. After all, the tiny island city-state is located on the equator, far from the other Arctic States of Russia, the United States, Canada, Denmark, Finland, Iceland, Norway, and Sweden.

In the long run, climate change presents an existential threat to low-lying Singapore through rising sea levels. Over the shorter time horizon, however, melting Arctic ice may have severe economic implications on the world’s second largest international port, run by Port Authority of Singapore International (PSA International). The opening of the Northern Sea Route (NSR) has the potential to reduce the current 40-day voyage between Europe and Asia by 10 days, effectively bypassing the heavily trafficked route through the Suez Canal, the Strait of Hormuz, and the Strait of Malacca. In the face of such uncontrollable external forces stacked against PSA International, is the future fate of the company sealed? Not necessarily. 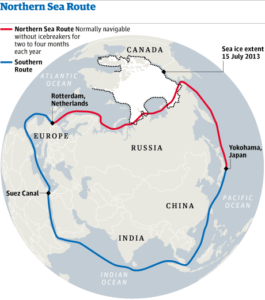 Fortunately for Singapore, the current seasonal fluctuations of arctic sea ice only permit transit during the summer months. Furthermore, the NSR faces formidable challenges, including limited capacity restrictions on vessel sizes and a lack of existing infrastructure, preventing the channel from becoming fully operational. These factors buy Singapore and PSA International crucial time to adapt to gradual warming over the next few decades, and adapt it must.

Beginning in 1996, PSA International started a series of key initiatives to transform itself into a global terminal operator to ensure long term competitiveness. Beginning with its international port project in Dalian, China, the company has expanded its global footprint to Asia, Europe, Latin America, and the Middle East, establishing itself as one of the world’s largest port operators. The drive for global diversification has resulted in overseas shipping volumes exceeding domestic volumes for the first time in 2015, even though revenues are still largely derived from Southeast Asia.

PSA International has developed managerial and technical expertise in port operations and is well poised to take advantage of a silver lining – becoming the port operator of the future operational Northern Sea Route. By continuing its current trajectory of international expansion and possible participation in the NSR, such growth should help to mitigate the loss of revenues associated with reduced traffic through the port of Singapore.

As the Arctic ice thaws, competition is heating up among the various Arctic States for the sizable hydrocarbon prize, estimated at 15% and 30% of undiscovered oil and gas reserves, respectively. Singapore is also home to Keppel Corp and Sembcorp Marine, two global leaders in Offshore and Marine Engineering (OME) with expertise in oil and gas technologies (ice-breakers, jack-up rigs and floating production storage and offloading platforms) which play a pivotal role in offshore exploration and production in hostile environments. In addition, Singapore is conducting cutting edge research around the Arctic and energy research and development through the NUS Center for Offshore Research and Engineering and Singapore Maritime Institute. The goal of the Singaporean government is to harness these companies and research institutions along with PSA International to provide an A-Team capable of delivering a comprehensive suite of services to the emerging Arctic frontier.

The pragmatism and foresight often attributed to Singapore is well summed up by Sam Tan Chin Siong, Senior Parliamentary Secretary at the Ministry of Foreign Affairs and a Member of Parliament, “Arctic melting is not a question of if, but when. We need to take a long-term view.”

Can Chemical Manufacturers Take the Heat?

Is CEMEX threatened by environmental regulations? Quite the opposite

Student comments on Strange Bedfellows – The Arctic Council and.. Singapore?