Washington is catching up on reforming the way government uses computer technology and connectivity. Moonshot advances have transformed every aspect of society but government. As much as better delivery of information technology and agency problems were not in the top handful of presidential issues for a long time, they soon became too big to ignore. In October 2013, the failure of dysfunctional Healthcare.gov became the lead story on news channels. The original estimate from the Congressional Budget Office had been that 7 million people would enroll, but given the circumstances if only 4 million did, it would be considered a success. “Healthcare.gov had just launched and it wasn’t going too great. […] If it couldn’t be fixed, then it would be a catastrophe for the policy, with the 2014 election coming and the unpopular law having failed to launch. [Our] honest assessment [was that] the whole […] site was overpriced by hundreds of millions of dollars and did not work at all” [2] explained a member of the tech squad. It took 8 seconds to respond to a mouse click. The site miscategorized minors in Louisiana as incarcerated prisoners and thus as ineligible for health care. It crashed so often that no one was able to complete an application. The failure threatened not only the controversial Affordable Care Act but the legacy of the Obama administration, while costing taxpayers no less than $300 million. 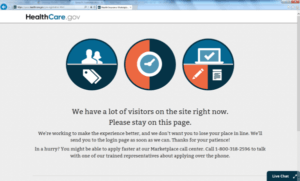 To combat the top-down and inflexible mindset that locked federal IT into obsolete practices and caution, the US Digital Service (USDS, consulting) and 18F (coding) [3] were created in 2015. Funded by Congress’ omnibus $20 million spending bill, the White House startup “paired top technology talent with the best public servants”. [4] The goal was to fix problems, build products, and consult for government agencies to help improve the country’s most important digital services. The challenge was that contractors had been hired to work only on discrete pieces of the puzzle but none dealt with overall performance issues. No contractor had been made responsible for ensuring that Healthcare.gov was operational. [5] The other real foe was combating risk aversion. Government was trained to not do things differently because really bad consequences could occur when something different failed. 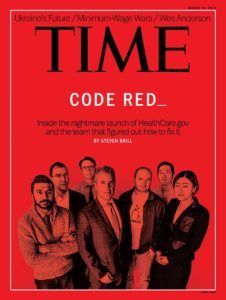 Because this is such a large industry to disrupt, President Obama’s 2016 budget included a total of $105 million to replicate the USDS team inside of the 24 major agencies, for a total of around 500 people. The organization sits in the Office of Management and Budget, reporting to US Chief Information Officer. As a world-class technology coalition inside government, the USDS helps agencies by introducing Silicon Valley’s competitive best practices – nimbleness, speed, risk-taking, experimentation, relentless testing and agile problem-solving.

The Healthcare.gov’s rescue plan led the government to parachute top tech talent into other high-impact projects like the Affordable Care Act, veterans’ affairs, social security, student loans, and immigration. [6] The biggest priority at Veterans Affairs was creating a disability evaluation tool for vets applying for benefits. At Immigration, it was helping Homeland Security make the I-90 process - how to get a replacement green card - into an online application process. To actually apply to the system it used to cost about $400 per application, it took end user fees and 6 months’ wait time, and by the end, the paper application had traveled the globe no less than 6 times. I-90 was the first functioning release that had existed on this project in almost 7 years. Previous results had been behind schedule and slower than paper on a $1.2 billion contract. [5]

Beyond the burst-seeking culture that goes with non-bureaucratic white boards and DJ equipment, the active ingredient for USDS’ success lies in the squad’s ruthless mission of hanging on to public service. The Healthcare.gov experience showed Silicon Valley that status quo was no longer an option. “Some are working right now on another app for people to share pictures of food or a social network for dogs. Your country has a better use for your talents. […] All of these are design and information processing problems, matters of life or death to millions of citizens and things you can fix if you choose to.” [2] In this market economy, technology talents are crucial capital. Allocating one’s resources is a personal choice or a collective responsibility. Washington offers an opportunity for true impact through digital disruption. Increasing numbers of engineers and designers care more for challenges and chances to influence real problems and change the way the government is operated more than for money and free food at work. Eventually it will become a point of pride. If a nerd [7] is really the best of the best, then at some point he or she will rejoice in being asked to “transform the world’s biggest bureaucracies”. [8]

[2] Mikey Dickerson to SXSW: Why We Need You In Government speech

[3] Washington Post, The White House Launches US Digital Service With Healthcare.gov Fixer At The Helm

[6] Business Insider, How the White house plans to poach 500 recruits

[8] TechCrunch, Uncle Sam wants you to hack the Pentagon