In this article, I will argue that climate change will negatively impact the copper industry, which might ultimately hurt the developing world and reinforce inequality within the globe.

Due to its electrical conductivity, copper is used in electronics, cars, and wires. This makes copper critical for highly developed countries. It is also an essential construction material, that developing countries need to build its infrastructure and catch up with the rest of the world. But, who needs copper the most?

According to the Oracle Mining Corporation, developed countries still consume more copper per capita than developing countries (10 kg in US vs. 5.4 kg in China). However, copper demand stagnated or decreased in developed economies, while the opposite is true in the developing world. Developing economies’ copper demand has steadily grown over the last decades, fueling economic and social improvement. By 2011, China already represented 40% of the demand.

However, copper mining significantly contributes to climate change. Directly, the copper production process generates CO2 emissions from fossil fuel combustion. Indirectly, copper production inputs and logistics also contribute. Copper is usually transported by trucks, trains, or vessels that burn fossil fuels. Also, copper production uses vast amounts of electricity in smelting and refining. Thus, it is reasonable to assume that carbon taxes could be introduced, given these environmental externalities. What would be the impact of this measure? Let’s explore this through a specific example.

Codelco is a state-owned Chilean mining company and the world’s largest copper producer. Based on their annual report and USGS statistics, they produced ~10% of the world’s copper in 2015 and own 8% of global reserves. They are also a large producer of greenhouse gas emissions. Last year, Codelco produced 3,2 t CO2e/millions tmf from both indirect and direct effects, and in 2011 it consumed 12% of the total national electricity supply.

Copper is a key driver of growth and economic wealth for Chile. As Patricio Meller, PhD. in Economics, mentions: Copper was one of the key components of Chile’s development since the market opened in 1990. Since then, contributions increased 10-fold, becoming 20% of total fiscal income by 2011. What would happen if the industry is taxed?

If only Chile taxes the industry, Codelco might become less competitive given additional costs. As Chile’s growth still heavily relies on copper revenue, it is reasonable to assume that local government will avoid doing this, unless the rest of the world does it. This is proven by press clippings that show that a CO2 tax in electricity could start impacting the industry in 2017-2018, but the tax is meant to affect all Codelco’s competitors not generating a mayor competitive disadvantage.

However, even if the entire world were to tax mining, Codelco would probably still be in bad position. Global demand for copper would probably decrease as prices rise, and Australia may become a more competitive supplier given its closer location to China and India, which would reduce relative transportation costs (see Figure 1). Regardless of the scenario, Codelco’s success to survive climate change regulation hinges on its ability to become the most efficient player in the market. 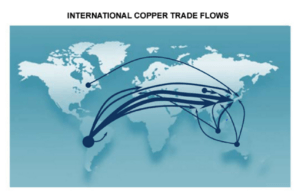 But, how is Codelco doing in this area? Its sustainability report shows that they have been taking increasing care of reusing water and reducing energy consumption. Also, newspapers clippings show that they have implemented cost cutting programs, aimed to reduce costs in US$700 MM by 2016.

Nevertheless, Codelco’s actions are likely not enough for the long term. Labor costs are not expected to fall as Codelco faces incredibly powerful unions and Chile is continuously becoming more developed, which is rising overall wages. Also, according to BBVA, electricity costs in Chile are expected to become the 2nd highest in the world, after Congo.

What can Codelco do, then? In addition to cost cutting, Codelco could consider entering the recycling copper industry, as energy prices are driving “virgin” copper costs up. As mention by the International Copper Association, Copper is the only element that is 100% recyclable, it needs 85% less energy to be produced than pure copper and will reduce its carbon emission per ton of copper too. Based on press clipping, Codelco is not publicly looking to enter the recycle market, but in a raising cost environment, it might make sense to start developing this capability soon.

Even if Codelco stays relevant after climate change regulations, significant doubts remain as enviromental damage is being generated as we speak and nowbody is paying for it. Also, an increased in copper price due to taxes on CO2 could slow down developing countries growth. Is it fair that developing countries pay the price of carbon emissions that developed countries didn’t paid during their growth period? Will my great-grandchildren think that we made the right decision when deciding to sell our Chilean copper without including the full negative externalities costs into it?

Not Only Is Vegas Taking Your Green, It’s Going Green Too