Why does Starbucks care about climate change?

Climate change is not a looming threat; it is already affecting coffee crops across the globe. Tanzania, has already seen production decline by roughly 137 KG per hectare for every degree-Celsius increase in temperature. The result is a 50% drop in production since the 1960s [2].

Whilst these climate change effects are common to many crops, coffee is especially vulnerable since it’s gene pool has little depth. Currently only two types of coffee are grown for human consumption: arabica and robusta. Since farmers have typically not selected for diversity when breeding these species, crops have not evolved to exist in either warmer or wetter conditions. This lack of diversity also exacerbates the effects of pests and disease [3].

What is Starbucks doing about it?

Starbucks has responded to the challenge by working with farmers to develop their ability to grow coffee in warmer climates and by reducing its own environmental footprint.

At the farm level, Starbucks has built a set of standards for their farmers to follow. These include shade and tree conservation to protect crops and reduce the risk of disease and pests [1]. Starbucks has also worked directly with farmers to experiment with new growing techniques: in 2014 they were able to commercialize a new strain of fungal-resistant coffee which they developed with a Costa Rican cooperative [1]. Starbucks has typically been generous with its findings, operating Farmer Support Centers in many of its coffee producing regions. These centers offer farmers free access to information and training on agronomical advances [4].

With respect to its environmental footprint, Starbucks has focused on renewable energy and energy conservation [5]. In 2016 Starbucks was named one of the top 10 purchasers of renewable energy in the US [6]. Through purchasing Renewable Energy Certificates (RECs) equivalent to 100% of its store energy utilization, Starbucks has been able to support the development of cleaner energy sources. REC purchases provide additional revenue to wind-farm owners, which allows them to offer electricity at prices that are competitive with fossil fuel and power plants [6]. Additionally, since 2008, Starbucks has sought to gain global green building accreditation through integrating green building design into all its stores. Recently, Starbucks has also installed Energy Management Systems in roughly 6000 of its stores [7]. These systems optimize heating and cooling [5].

Finally, Starbucks is a key lobbyer for progressive climate change policy: Starbucks helped found the advocacy group BICEP (Business for Innovative Climate and Energy Policy) which enables it to work with other companies to advocate for new policies [5].

Though Starbucks has shown positive steps forward in combating climate change, its journey has been challenging and laden with conflicts.

One of the conflicts that Starbucks has had to reconcile is that its efforts to reduce its carbon footprint is offset by its desire to grow into different sectors [5]. One example is the addition of hot food to its menu: this required more refrigeration and ovens and therefore more energy [1]. The results of this can be seen in Exhibit A. 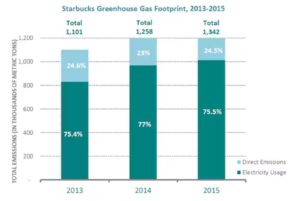 Another is that the producing the raw materials it requires such as wood and palm-oil drives deforestation; recently Starbucks scored a 10 out of 100 for its minimal procurement of the more expensive deforestation-free palm oil [8].

In addition to challenging themselves to prioritize their environmental efforts when such conflicts arise, something else I would like to see is an extension of their energy savings focus to include transportation as well as stores.  Though transporting coffee materials accounts for up to 30% of Starbucks’ overall Green House Gas footprint, no initiatives have been taken by the company to minimize this [9]. I would like to see them extend their REC purchases to cover 100% of all their emissions (not just those generated from store operations) and since they don’t own their own fleet, I would also like to see them extend their lobbying activity to promote improvements in the energy efficiency of trucks. A loftier goal, but arguably more effective, would be to move partly from road to rail: trains are much more efficient [10]!

Is any of this enough?

Starbucks can’t change the world alone. No matter what they achieve in isolation, the impact on the industry can only be meaningful if Starbucks brings companies along with them on this journey. I would therefore encourage Starbucks to capitalize on the good work it has already done by promoting the leaps forward it has taken and  the benefits it has seen them yield.