‘Farmers are seeing the effects of a changing climate, with severe hurricanes and more resistant bugs reducing crop yields. The company is now preparing for the possibility of a serious threat to global supplies.’ – Jim Hanna, Starbucks Sustainability Director, 2011 [1]

By 2016, CO2 levels in the atmosphere were 404.07ppm, the highest in 400,000 years, up approximately 7% since 2007 [2] . According to the IPCC [3], if no additional efforts are taken to mitigate the effects of climate change, CO2 concentrations may increase to 450ppm by 2030, significantly increasing global temperatures (See Exhibit 1) [3]. Such changes will have material impact for Starbucks as weather patterns and, consequently, global coffee plantation yields will be negatively affected. As the Earth warms, the interplay of shrinking glaciers, reduced snowpack, and increasingly erratic rainfall raises fears over rain shortages, severe hurricanes, mudslides and soil erosion, particularly in the core Starbucks coffee-growing areas of South and Central America [4]. In addition, warmer weather allows pests and parasites to thrive in plantations, damaging harvests [5]. 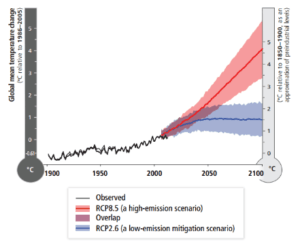 What is the threat?

While some of Starbucks’s coffee supply comes from Brazil, the specialised beans from Central America’s diverse microclimates produce the blends for which Starbucks customers pay upwards of $4 [9]. If global temperatures increase as predicted, 80% of the coffee-growing land in Brazil and Central America used to grow Starbucks’s most popular type of coffee, Arabica, will become unsuitable for crop growing by 2050, and a 50% decline in coffee yield will be observed [7]. This decrease in yield may cause coffee prices to skyrocket for Starbucks, resulting in costly supply chain complications and margin erosion of products.

Is Starbucks successfully addressing the threat?

‘Addressing climate change is a big priority for Starbucks. We believe now is the time to increase our investments in solutions and strategies that address this crisis. The steps we’re taking not only address our environmental footprint – they help to ensure the supply of high-quality coffee that our customers expect from us into the future.’ – Starbucks Climate Change Responsibility, 2016 [8]

It is with mixed success that Starbucks has responded to the threat of climate change. The approach has been threefold:

(1) Starbucks successfully works with farmers to improve the ability to grow coffee in a warming climate through guidance and provision of disease-resistant beans. Starbucks helps farmers succeed in an increasingly difficult climate by offering financial support and guidance to improve the productivity of land through fertilisation, trimming trees and replacing trees [7]. Moreover, in 2013, Starbucks bought a Costa Rican coffee farm and turned it into a laboratory for testing innovative coffee-growing practices and developing disease-resistant coffee beans capable of thriving in warmer temperatures [9]. In 2014, after farmers in Chiapas, Mexico, lost 60% of their coffee production to leaf rust (See Exhibit 2), following increasing temperature and rain, Starbucks began to distribute innovative coffee plant seedlings that were rust-resistant. By 2015, Starbucks had donated 20 million of the seedlings to farmers. Despite resistance to leaf rust, the innovative seedlings had two downfalls – they were slower-growing and lower-yielding than usual beans. 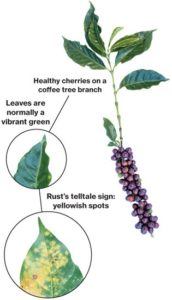 (2) Starbucks has created more eco-conscious stores through the LEED® (Leadership in Energy and Environment Design) Initiative. Starbucks has over 1000 LEED®-certified stores in 20 countries—more than any other retailer in the world. These stores include recycled coffee grounds in table tops, low greenhouse gas emitting materials for adhesives, paints, coatings and flooring, 10% of materials extracted within 500 miles, and 45% power savings via efficient LED fixtures [8]. 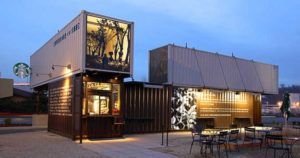 (3) Starbucks has less successfully endeavoured to reduce greenhouse gas footprint. Starbucks has been attempting to reduce greenhouse gas emissions by 25% in stores through doubling down on renewable energy, energy conservation, and climate adaptation and mitigation efforts [9,8,7]. However, in practice the introduction of heated food to Starbucks’s menu, which requires more refrigeration and ovens, has hampered long-term environmental goals (See Exhibit 4). 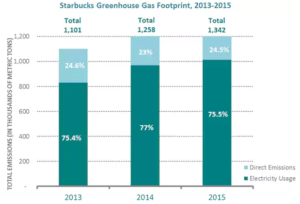 What additional steps could Starbucks take? 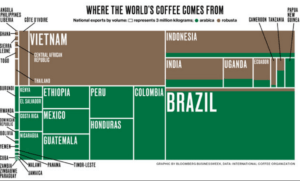 Coca-Cola: Survival in an Era of Climate Change