Climate change is poised to have a devastating impact on the growing of coffee beans, and as the largest seller of coffee in the world, Starbucks is certainly paying attention. Unless global emissions are reduced significantly, climate change is predicted to knock out one half of the area amenable to coffee production by 2050, as shown in Exhibit 1 [3]. Starbucks recognizes the dire implications this development could have on its business, and has been a strong supporter of inter-company climate change initiatives; however, it is struggling to reduce its own emissions. 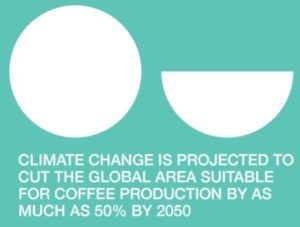 The Consequences for Starbucks

The coffee production industry has already begun facing the challenges posed by climate change. On its website, Starbucks identifies several key present challenges – increases in erosion, pest infestation, and variability in rainfall and harvest patterns [1]. Not surprisingly, as these problems worsen over time, the shortages will reach the end consumer in the form of higher prices [2].

Starbucks currently has a vast web of suppliers generally located along the Equator, but as temperatures rise the areas suitable for coffee growth are already beginning to shift in latitude, altitude, or both. For most coffee farmers physically moving operations is a non-starter without meaningful financial support from Starbucks (or another large coffee company) [2]. With or without direct support from Starbucks, any shift in the supply chain corresponds to significant costs for Starbucks, as it needs to design new routes and potentially establish brand new relationships. A perverse reality, particularly in Asia, is that as coffee farmers relocate they will run up against tropical forests, that when destroyed will drive up emissions [3].

Partnering with the Farmers

To its credit, Starbucks has been proactive in partnering with the independent farmers supplying its coffee beans to 1) set and implement standards around effective and sustainable growing strategies and 2) test experimental crops­ that may be better suited to handle more extreme weather conditions. The company has worked to design seedlings that are more resistant to fungus, though to this point these beans are also slower growing [2]. In particularly fungus-infested areas, Starbucks has donated large amounts of the fungus resistant product to the local farmers that it’s partnered with. [2]. Seedling innovation is critical and needs to remain top of mind for Starbucks, as there are projections that wild coffee, which serves as a “storehouse of genetic resources,” may be extinct by 2100 [3].

Starbucks, for obvious reasons, has been an early supporter of corporate climate change initiatives. The company co-founded the Business for Innovative Climate and Energy Policy, which pushes for stronger climate change policies, and is a signatory of the RE100, which is a corporate commitment to buying 100% renewable energy. The company has also made a strong push to build its stores to LEED standards [1].

Despite these efforts, Starbucks has failed to reduce its greenhouse gas emissions. In 2008, the company established a goal to cut its energy use by 25% in its stores; however, in recent years the company’s emissions have actually increased [1, 2]. This struggle has been driven by 1) an increase in the number of stores and 2) expanding into new product lines such as heated food, which require a lot more energy to store and prepare. It’s important to note that heated food has had a meaningfully positive impact on profitability [2]. 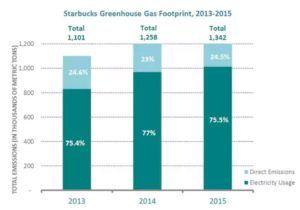 Until Starbucks is willing to practice what it preaches, and actually reduce its own emissions, the company should not be viewed as a leader when it comes to addressing climate change. As we see in the introduction of hot foods, it seems that immediate profits have been deemed as more important than reducing emissions. As a publicly traded company, Starbucks is undoubtedly subject to immense short-term pressure from its shareholders, but at what cost? Yes, the company has done a lot to try and reduce its footprint, but to this stage, profit maximization has ultimately won out. To this end, I think Starbucks needs to consider the following:

6 thoughts on “Starbucks: Practicing What It Preaches When It Comes to Climate Change?”