“As long as there is coffee in the world, how bad could things be?”― Cassandra Clare, City of Ashes

But, how long will this hold true?

Coffee drinking is one of the most prevalent contemporary habits: more than 400 million cups of coffee are consumed daily in the US only! As more and more people drink coffee across the globe, coffee bean requirements increase each year, yet producers fail to keep up. On the raw material side, coffee drinks are essentially roasted, crushed and brewed coffee beans. The latter are produced in areas around the equator and the key varieties are Arabica – 75% of production (a), Robusta – 25% of production (r), while some areas produce a mixture of the two (m).

Climate change has imposed a serious threat in the production of coffee. Both the increase in the average temperature globally and the shift of the raining seasons destroy larger and larger parts of the farmers’ yields and create favorable conditions for pests and plant diseases. For instance, Brazil and Central America currently used to grow the most popular type of coffee, Arabica, will be unsuitable to the crop by 2050 (International Center for Tropical Agriculture). Globally a 50% decline is predicted over the same period. The most likely outcome would be a drop in quantity and a rise in prices.

This is becoming evident, with the gap between the decreasing production and the increasing consumption has turned negative in the past years, resulting in a ~3.3 million 60kg coffee bean bags deficit. The trend is exacerbating; low sophistication farmers are faced with the unprecedented climate change impact and have no means or knowledge on how to protect their crops. 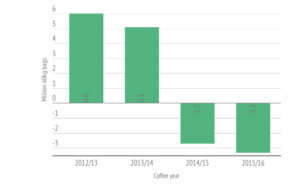 Starbucks: from small shop to empire to crisis

In its almost 40 years of existence, Starbucks has become the largest global coffee seller and boasts presence in more than 60 countries with a network of ~22,000 stores and a sky-high brand awareness. Throughout the company’s life, best quality coffee produced and brewed with sustainable methods has been a core priority. Thus, the company established detailed quality processes and criteria to make a coffee bean “Starbucks-level” and conducted extensive trainings to the selected farmers.

Climate change is however threatening the company’s core product and operating model, forecasting a doubtful future for our favorite latte and our relaxation spot in the coffee shop next corner. On one hand, higher temperatures destroy the overall yield and hamper, even further, the availability of “Starbucks-level” coffee beans, which results in lower supply for higher prices. On the other hand, new, stricter regulations have forced Starbucks stores and plant to reconsider their environmental footprint, in terms of energy consumption and emissions.

What is Starbucks doing? 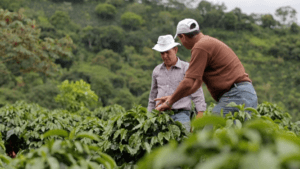 Leveraging its consistent profitability and CSR-focused image, Starbucks has heavily invested to counter the aforementioned threats. On climate change, Starbucks focused more on maintaining consistent production levels in terms of quantity and quality:

On footprint reduction, the company is focusing efforts on energy conservation and the purchase of renewable energy, as more than 80 percent of emissions are attributable to energy for use in stores, offices, and manufacturing plants. The program however has not been particularly effective as Starbucks has, in parallel in 2014, entered the warm food industry. 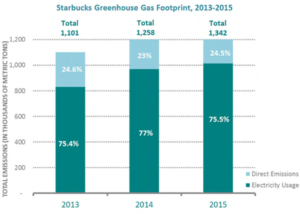 What could Starbucks do more?

There is significant room for Starbucks to increase impact against the perilous effects of climate change to its business.

Waste Management is Cleaning Up its Act

Student comments on Starbucks Coffee Nightmare: Will future mornings be deprived of our favorite drink?