Agriculture is one of the most highly impacted sectors in the world by climate change. By the very nature of agriculture, it is dependent on climate. Coffee is one of the agriculture product that falls victim to the impacts on climate change and is an industry that faces serious challenges in the future as a result. Severe hurricanes, extreme temperatures and disproportional high-altitude rains have enabled an onslaught of high cost diseases and pests that directly impact coffee farms and coffee yield [1]. In 2013 the damage in Central America, a region containing some of the most important coffee producing countries [2], was about half a billion dollars and put 350,000 people out of work [1]. Just like Central America, most other coffee producing regions in the world are experiencing similarly worrisome effects as a result of climate change. So much so, that a new report from the Climate Institute claims that by 2050 suitable area to grow coffee will be halved [3].

This should be worrisome for everybody, but it is, not surprisingly, particularly worrisome for coffee producers, such as Starbucks.  The threat climate change poses to global coffee supply, if anything remotely close to the startling statistics mentioned above, fundamentally threatens Starbucks’ operating model. As a result, Starbucks has implemented several initiatives around sustainability, several of them designed to address the impact climate change is having in their business. Given that the impact on coffee plantations takes place outside of the Starbucks organization, efforts have been established to assist their coffee suppliers, whilst internally the company has started its own initiatives to address the impact that its operating activities are having on climate change.

First, Starbucks has established a goal designed to increase loans provided to coffee farmers and their communities to help finance activities such as tree renovation (replacement), with the objective of helping farmers increase their yields. Their goal of increasing farmer loans to $20 million was surpassed by 2015 [4]. 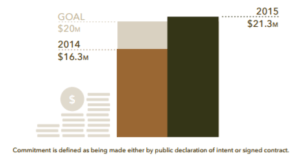 Another initiative that Starbucks has is the Farmer Support Center initiative, with the intent to “provide local farmers with resources and expertise that can help lower their cost of production, reduce pest and disease, improve coffee quality and increase the yield of premium coffees” [5]. By helping farmers in such a way, it helps them circumvent part of the impact they have experienced from climate change.

With regards to Starbucks’ own operations, they have several initiatives with specific goals underway. They have the goal of building all new, company-operated stores to achieve LEED certification; they have 700 LEED certified stores, more than any retailer [4]. Additionally, they are hoping to reduce energy consumption by 25% in company operated store; this has proven to be a lofty goal, threatened by the fact that given that food has become prevalent in their stores and requires additional energy consumption [4]. Starbucks is also hoping to purchase renewable energy equivalent to 100% of electricity used in their global company-operated stores. Furthermore, they are targeted a 25% reduction in water consumption in company-operated stores in 2015, which was surpassed with a 26.5%.

Starbucks’ is in a complicated position in the context of its supply chain, given that climate change has a direct impact on its sustainability as a business by virtue of the impact it has on coffee farms, but they have few levers to pull to help directly overcome the challenges of climate change for their suppliers. They have direct control of their environmental impact they have as a result of their operations, but not entirely for their suppliers. They have been publicly vocal about support for climate change regulation that would potentially help on a more macro level, such as supporting President Obama’s “American Business Act on Climate Change Pledge” [6]. As a result, when assessing their efforts to alleviate the impacts of climate change, it is important to keep this in mind. That being said, looking at their progress in achieving the goals that they have set in Exhibit C, it seems that they could step up their game in achieving them or evening setting loftier goals. In particular, their LEED certification rate and water reduction efforts. Moreover, Starbucks needs to be more disciplined and rigorous about taking into consideration these sustainability goals as they make business decisions that pose a challenge on accomplishing them, such as how growth into new sectors, such as heated foods, impacts their energy mix (to the detriment of the initiatives) [7]. Starbucks will be releasing their 2016 responsibility goals, with a vision on 2020 and a promise to be more ambitions and do more; I hope they live up to this promise. 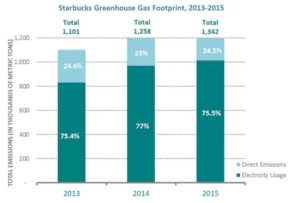 Tesla: Leading The Charge Toward A More Sustainable Future