Since 1971, Starbucks has been serving customers high-quality coffee with personalized service offered in an upscale yet inviting store atmosphere. During that time, the company has adjusted to changes in consumer lifestyles and behavior by offering single-serve coffee for home or office use, drive-through windows for convenience, and offering food items to complement its beverages. In the past decade, Starbucks has invested heavily in technology to enhance operations and improve the customer’s experience. Below are three noteworthy examples: 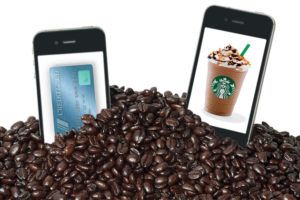 In December 2014, Starbucks released its Mobile Order & Pay, a smartphone-based application that enabled customers to do two things: (1) submit an order in advance via the app, and (2) pay using the app when picking up the order at the store.1 According to the company’s September 27, 2016 fiscal year-end filing, 25% of all sales were completed using Mobile Pay, up 20% from the previous year.2 Despite not being offered in all stores yet, Mobile Order accounted for 6% of fourth quarter sales, up from 5% in the preceding quarter.3 Operationally, Mobile Order & Pay is helping Starbucks accomplish the following three things:

Mobile Order & Pay was an evolution of Starbucks’ existing app, initially developed to migrate customers from its card-based loyalty program to a digital version. In addition to being the platform for Mobile Order & Pay, the digital loyalty program has enabled Starbucks to engage more directly with customers, for example, offering birthday rewards or promotional pricing during inclement weather or slower mid-day periods. Starbucks customers also earn loyalty “stars” when using services from technology-drive companies with which Starbucks has partnered, like Lyft and Spotify.4 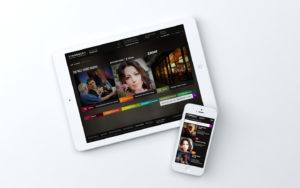 In 2008, Starbucks launched its My Starbucks Idea initiative. The purpose of the initiative was to open communication with customers willing to share their ideas of what would make Starbucks better. Many of Starbucks’ technological initiatives came from via this simple platform, for example, Mobile Pay and in-store WiFi.5 In the latter case, Starbucks not only rolled-out free WiFi across its stores, it partnered with Yahoo! and other content providers to develop the Starbucks Digital Network, offering premium digital content like the New York Times, Economist, and Wall Street Journal to in-store customers. In July 2015, the company announced a partnership with The New York Times to offer content to members of its loyalty program via the Starbucks app.6 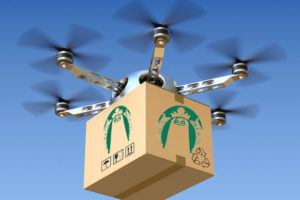 Seeing success with its Mobile Order & Pay, a natural extension is to use technology to improve the delivery of products. In October 2015, Starbucks rolled out its Green Apron service which offered delivery service to customers using Mobile Order & Pay. Requested by customers and designed specifically for dense urban environments, Green Apron service was first launched in the Empire State Building in downtown Manhattan.7 Following early success in New York, the company partnered with Postmates, a technology-driven food delivery platform, to deliver orders to nearby customers in other metropolitan areas.8

To expand its delivery offering, Starbucks partnered with Google X, an Alphabet subsidiary, to test delivery via drone. The companies had tested deliveries and were in advanced partnership talks when Alphabet pulled the plug on the Google X project due to disagreements over access to customer data and as part of a broader Alphabet effort to rein in spending and focus on turning other experimental projects into real businesses.9

While it has benefited from early technology investments, Starbucks should not let up. In addition to investing in order and delivery capabilities, the company should leverage technology to improve its operations and drink-making technology. For example, Starbucks could invest in inventory management systems to track expiration and replenishment of ingredients, ingredient dispensing controls to automate ingredient add-ins currently being done manually and reduce waste, and temperature controls to offer customization if desired or simply improve temperature consistency. The company could also consider launching a My Starbucks Idea campaign to generate ideas from customers as to how to better leverage technology give that they use and observe the company’s products so frequently.

As long as management continues to prioritize technology, Starbucks’ customers, employees, and shareholders should benefit. According to Starbuck’s CEO, Howard Schultz, that seems to be the focus:

By anticipating and beginning to invest many years ahead of the mobile technology curve, Starbucks today is defining customer-facing … mobile and retail experiences of the future. And the technology innovations we are introducing are further strengthening our brand, improving our efficiency and in-store execution, increasing our profitability, enabling us to further extend our lead over competitors, and, most importantly, enabling us to deliver an elevated Starbucks experience to our customers.10

Unlocking accessibility to the stock market, even for the visually impaired

Quirky & Unique, a Peek into the Crowdsourcing Innovation Mob