For the last fifteen years the music industry has been in constant decline. The growing prevalence of online music piracy has driven annual sales of CDs down, a trend which has been further exacerbated by consumers choosing more often to purchase music online rather through traditional brick & mortar channels. To rectify this situation, the music industry has turned to music streaming sites as a solution and although many have been launched, none has been more successful than Spotify.

Spotify is a music streaming service app that is offered in a desktop and smart phone medium. The service allows customers to stream any song from any artist that they desire for free with the only cost being intermittent adverts. For a monthly fee, customers can receive an advert free experience as well as added benefits, such as the ability to create offline playlists. When Spotify was launched in 2008 it offered a solid option to consumers by providing a more convenient product to piracy at very low costs to the consumer. 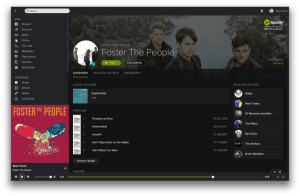 Spotify creates a lot of value for both the consumer and the music industry as a whole. As mentioned above, Spotify by converting users has been able to significantly reduce copyrights violations and provide a legal viable alternative to consuming music. Even without the subscription revenue, Spotify still generates business advertising revenue from its free users. Both revenue streams has resulted in increased compensation income to music producers and record labels.

Spotify also offers monetary value to users as well; by granting users access to an entire library of songs, consumers no longer have to purchase an album for a subset of desired songs and even for those who purchase their music by song, they now have an option to stream it for free. However, Spotify’s value proposition to consumers goes beyond monetary consideration, as it also caters to the modern preferences of music customers. Music consumers not only want to be able to listen to specific songs without buying an entire album, but they also want access to weeks’ worth of music without the accompanying drive space and for their experience to be personalized as well as social. Spotify fulfills theses needs by enabling listeners to curate their own playlists, access any song on a whim when connected to the internet and share their findings instantly with friends through Facebook.

Although Spotify’s ascent to being the most popular streaming site is a notable achievement, its ability to monetize is arguably more impressive. A lot of other streaming companies were able to galvanize customer interest (Beats Music, Deeper, Rhapsody are all good examples) but few have been able to materialize that attention into profits as well as Spotify. The service now has approximately 60 million customers of which 15 million are paying subscribers—or a 25% conversion rate. The company has used a “freemium” model of offering services for free in order to entice customers to pay. They have successfully executed this strategy, by identifying the key services that would push free users to become subscribers without eliminating the product’s appeal to free users. Spotify has also added flexibility by differentiating the limitations placed on the free model when the app is utilized on a phone versus a desktop.  For instance, removing the ability to play any song you want in your playlists while on your phone is a good example of a limitation that strikes the balance of being a notable inconvenience on only one format, which does not completely destroy the free-model’s value proposition.

If Spotify can continue this trend of shifting free consumers to subscribers it not only raises its own revenue profile but also its importance to the music industry as a whole. If Spotify can attain a significant paying subscriber base, it will give the company additional leverage in negotiations with music providers and better position Spotify to capture more of the value it creates.

Student comments on Spotify and the Digitization of Music