Southwest Airlines has been both contributing to and suffering from climate change since inception. Southwest’s massive rate of fuel consumption undeniably contributes to greenhouse gas (GHG) emissions. The use of harmful jet fuels comes at both a financial and reputational cost to Southwest. Perhaps less obvious is the financial and reputational impact of weather-related delays, which have been steadily rising over time. If it does not make progress towards addressing both facets of the issue – fuel consumption and volatile weather – Southwest is poised to face even tighter margins and risks losing passengers to other forms of transportation.

In 2015, the airline industry produced 781 million tons of CO2 globally – just over 2% of the total amount of CO2 emissions that were attributed to humans in 2015 [1]. Fuel is an inevitable aspect of air travel, just as air travel is an unavoidable component of modern life. Acknowledging this fact, Southwest has sought to reduce its environmental impact by updating practices to improve jet fuel efficiency and using alternative energy for ground-level operations [2]. Fuel-conserving practices implemented in 2015, including taxiing with only one engine and installing Split Scimitar Winglets, have already saved more than 1.1 million gallons of fuel [2]. On-the-ground innovations such as battery-powered baggage tractors and belt loaders have also helped Southwest reduce its reliance on fuel [3]. 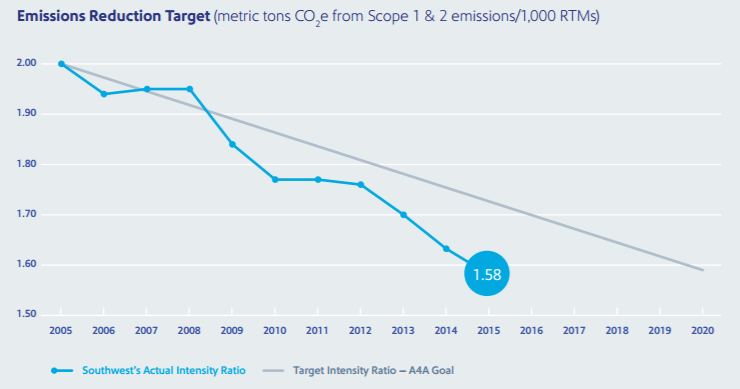 If Southwest is contributing to the cause, it is also experiencing effects in the form of increasingly volatile weather. Higher CO2 concentrations and rising temperatures have resulted in more frequent and intense occurrences of hurricanes, typhoons, and other damaging weather events. Flight delays and cancellations lead to maintenance and refund costs and, less quantifiably, customer satisfaction costs. By one estimate, cancelling a single flight can cost an airline anywhere from $1000-$40,000 even if weather-related [5]. To address this issue, Southwest has revised its fuel planning calculations and flight planning procedures, a change it claims saved two million gallons of fuel in 2015 [2]. Apart from these changes, Southwest seems resigned to accept bad weather as a cost of doing business. The “risks” section of its annual report simply states: “We have identified risks associated with regulatory change and physical climate risks such as extreme weather events as having the potential to create operational complexities.” [2]

Southwest is an interesting case study because, though it currently beats American, Delta, and United on fuel efficiency, it has such a long way to go [2]. To start, Southwest should increase its reliance on biofuels. The company has stated that beginning in 2018, it will purchase three million gallons of low carbon renewable jet fuel per year (a blend of biofuel and traditional jet fuel). This seems like a relatively unambitious target considering Southwest consumed 1.9 billion gallons of fuel in 2015 [2].  After the 2018 rollout, Southwest should place a bigger bet on biofuels and should increase its biofuel investment to at least 1% of total fuel consumption, or about 20 million gallons. Acknowledging that minimum amount of fuel a plane can use approaches an asymptote, the airline should continue to seek creative ways to cut CO2 emissions on the margin. A company of this scale can make a substantial impact through small changes such as optimizing the way snacks and cups are procured and recycled. 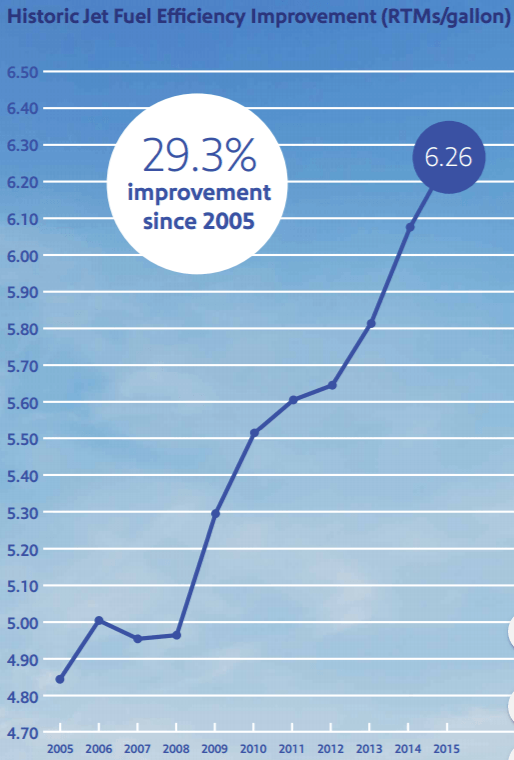 In terms of customer relations, Southwest should do a better job of promoting the successful practices it has already put in place. Someone casually browsing the website would not know that Southwest improved its jet fuel efficiency by 29% from 2005 to 2015 [2]. Why is this fact buried on page 65 of the annual report? Is it because airlines would rather not be associated with the concept of fuel burning at all? Consumers are becoming wiser to the impending and irreversible threats of climate change. Are airlines better off addressing environmental issues head-on, or shoving them into the baggage compartment?

3 thoughts on “Southwest Airlines Buckles in for a Bumpy Ride”