Imagine a world in which when the light bulbs, printer ink, or water filter are depleted, your home or office is wired intelligently to automatically order replacements from Amazon. That’s what Skyworks Solutions (SKWS) is doing via smarter technology in the Internet of Things “IoT”. The company does it all…they make semiconductors that connect your phone to everything: the internet, cell towers, Wi-Fi, and Bluetooth. In fact, they are one of the main semiconductor suppliers for the radio frequency chips for both Apple and Samsung, allowing people to place calls, connect to other devices, check email, and surf the web. This alone has made the company a technology giant, but the company also has a growing separate division. This division supplies the automotive industry, wearable technology companies, industrial companies, medical companies, and the military with technology to connect these devices to the IoT. The IoT is a massive opportunity, as industry experts predict the number of connected devices across the world will go from 25 billion currently to 70 billion in 2020.[i]  Because of this, Skyworks will be one of the most interesting companies of the next decade, as they leverage their business model and operating model to capitalize on the revolution occurring in the Internet of Things.

Currently, Skyworks is divided into two main segments, semiconductors for mobile phones/tablets and other radio frequency circuits for various applications in the IoT. They are highly leveraged toward mobile phones and tablets, as their integrated mobile systems business makes up 52% of company revenues. Within this segment, the company is dangerously leveraged toward Apple, as they disclosed that “one customer” makes up more than 10% of company revenue. Wall Street analysts, such as Oppenheimer’s Richard Schafer, think this number could be as high as 35-40%[iii], which explains why the company has taken a hit in revenues and earnings when Apple struggles. However, the company is now starting to focus on diversifying its operating model by focusing more on the IoT, and is ramping up its production of technology in connected smart home systems.

This has negatively affected the business in the past when Apple faces cyclical downturns in iPhone and IPad sales. Therefore, Skyworks must make the supply of semiconductors to original equipment manufacturers in 3rd world countries a core business segment, such as the Chinese and South American phone manufactures for the middle and lower end markets. These phone manufactures in the emerging markets (such as Huawei in China for example) are seeing massive growth in sales[v], and should be a much bigger percent of revenues.  This action will diversify the business model and make the Skyworks supply chain more robust.
My first recommendation is to diversify the business model away from mobile. The company’s business model is to dependent on wireless sales from Apple, so much so that the company has a very close beta with their main customer (see below one year chart). 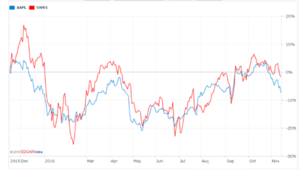 Many technology companies are at the forefront of acquiring patents in their respective fields to keep a choke hold on their competition, so that competitors cannot infringe on their technology. Skyworks currently has developed a small patent portfolio internally that allows them to innovate, but they could be doing so much more. Currently, industrial and technology patents tend to sell in the auction market for $300,000 for a well-served patent. Savvy technology companies and investors are using their resources to bundle these patents into well-connected portfolios, thereby raising the value of individual patents as companies have to pay to play in their competitors’ field. Skyworks currently has $1.6 billion on their balance sheet[vi], and could use a small portion of this to acquire a targeted patent portfolio from one of the private equity companies invested in the space. This would allow them to secure their position as the leader in the IoT, fend off competition, and invest in their business model for the future. When bundled together in a package of patents in a dynamic investment space, these patent portfolios can carry extremely large value, and Skyworks is well positioned as the industry expert to acquire a portfolio that would make their competition quiver.

Live Music in the Digital Age

Automation and Asteroids: How Rio Tinto is Changing the Future of Mining

10 thoughts on “Skyworks Solutions: The Technology in Everyone’s IPhone That Will Change the Future”