Bangkok has a sprawling metro system, consisting of a network of skytrains, subways, river ferries, and canals.  However, for years, the Bangkok metropolitan area has wrestled with traffic congestion.  A recent study placed Bangkok second on the list of most congested cities in the world.  During morning rush hour, Bangkok’s traffic moves 85% slower on average compared with a clear road situation and further slows to a “snail-like” 114% in the evening, meaning that journey times more than double during commutes [1].  Unfortunately, the traffic situation is only expected to worsen, especially as Thailand’s middle class continues to grow [2]. 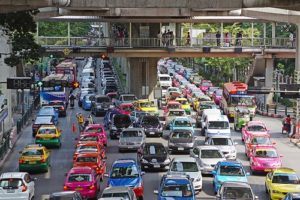 Enter, Kamolprudh Jumbala, CEO of Skootar.  Kamolprudh, along with one of his co-founders, had operated a few businesses before founding Skootar.  One of the biggest struggles they had encountered in every business was finding a reliable messenger who could run business errands around Bangkok in a reliable and timely fashion.  Errands ranged from sending invoices to clients, collecting checks from consumers, and delivering other important documents and packages.  A lot of the time, they found themselves navigating through the Bangkok traffic in their mid-sized sedans, spending hours in traffic – hours that they could have utilized much more productively otherwise.  Realizing that this problem was something a majority of the small- and medium-sized enterprise (“SME”) market faced, coupled with the recent proliferation of that market, Kamolprudh and his co-founders came up with an idea to build a platform to help solve these issues and allow businesses to operate more efficiently and reliably [3].

Skootar.  Skootar is a digital platform that allows customers to place motorcycle delivery orders in the Bangkok metropolitan area via its website and smartphone application.  In Bangkok, motorcycle taxis are a licensed form of transport, and one of the fastest and most popular ways to get around town.  If you have ever been to Bangkok, you cannot have missed the sight of motorcycle taxi drivers in bright orange vests whizzing between cars and in and out of seemingly impossible to maneuver traffic gridlocks. 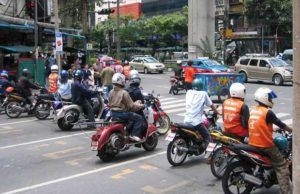 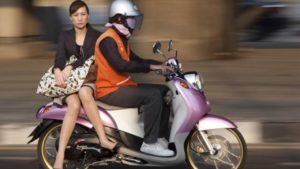 The application and website serve as a marketplace that connect SMEs and home users with motorcycle messengers, allowing customers to easily place an order around the clock, 24 hours a day, seven days a week.  The Skootar platform will then match the order with the closest and most reliable drivers within a couple of minutes.  Drivers go through a rigorous screening and training process, and peer ratings keep the system fair and transparent.  Users are also able to track the job status and driver location during the process and payments are easily made online or through the application.

Skootar’s business model leads to genuine value creation and efficiencies.  SKOOTAR’s goal is “to provide motorcycle delivery service that gets more convenient, reliable, and cost efficient every day” [3].  Utilizing motorbikes to navigate through traffic while providing access to safe, reliable drivers is an ingenious way of turning a troublesome process into a more efficient one that can be completed within seconds.  The delivery process is enhanced by calculating and combining similar routes to optimize the time and cost, and as a result, SMEs are able to operate in a more effective and cost-efficient manner while not having to deal with trust issues surrounding time, price, and driver behavior.  Thousands of businesses and individuals are utilizing Skootar for same day pickup and delivery of documents and parcels [4], [5]. 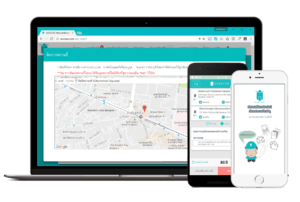 Skootar is successfully displacing the archaic messenger systems that have pervaded Bangkok, winning business from competitors such as Classic Express Service (“CES”) Logistics.  The Company is in a strong position to capitalize on a largely underpenetrated market.  While future threats include increased competition, Skootar has unparalleled first-mover advantages and can also expand its service to all niches of the on-demand market, including food delivery and transportation.

Here’s How to Buy Anything from Anywhere (Without Shipping Costs!)

Student comments on Skootar: Transforming the Messenger Service in Bangkok