When you think of bees, what comes to mind? Your favorite lip balm? Liquid gold on your pancakes? Faux-German packaged ice-cream? Perhaps you thought of little, black-and-yellow jobs buzzing around during the summer. Bees, in all their buzzing glory, have been hit hard by climate change, an impact that translates to us humans more directly than at first glance.

Bees are a major constituent of animal pollinators which support the pollination and yield production of 70% of crop species worldwide (1). More specifically, pollination-dependent agriculture in the US drives tremendous economic value, ranging from $14 – $23 billion, with cascading impacts on industrial sectors ranging from $10 – $21 billion (2).

Bees have long been considered a keystone species which hold entire ecosystems together. Their ability to pollinate a variety of plant species ensures genetic variation and growth from the literal ground up. While several companies have capitalized on our buzzing friends, the farmer cooperatives on the front lines of beekeeping have been directly exposed to the impact of the declining health of bee colonies.

Climate change has negatively impacted bee populations with large numbers of colonies dying off each year (3). 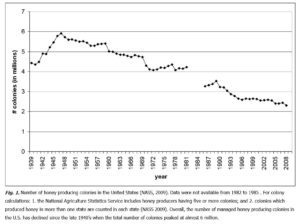 While a whole host of factors have led to a decline in bee populations, two are particularly salient with regards to climate change:

Beekeeping cooperatives have struggled to catch up. Since the mid-2000s, keepers have seen a 30% – 45% year-over-year decline in honey bee colonies (8, 9). This dramatic decrease trouble small farmers and big agriculture alike, spurring even President Obama to announce his program to promote pollinator health in 2015. To counter colony die-offs, farmers and keepers split hives each year in hopes of redistributing remaining bees into pastures that have the highest likelihood of supporting large colonies. Additionally, keepers have deployed pesticides, medications, and anti-parasitic chemical regimens to maximize the probability that hives survive into the next season. Chemical counter measures have a dual effect in that active ingredients often negatively impact colony health (10). Furthermore, the pesticides and herbicides used on crops weaken the bee’s ability to fight off infection. For the farmer, colony maintenance has increased in cost without a guarantee of healthy hives. In short, higher risk of investment has not been matched with a commensurate reward – keepers are simply hoping to maintain current colony levels and stop colony collapse. Decreasing colony counts also threaten crop yields. The $2 billion almond farming industry in California alone relies on more than 1 million bees for pollination (11). In the end, these expensive tactics are simply putting a band aid on the fundamental causes which are rooted in the environment and climate.

To drastically alter the equation for beekeepers, new approaches should be considered:

Solving colony collapse requires a multi-pronged approach from a range of organizations. Ultimately, the humble bee reminds us of how small, unnoticeable changes in the environment can have lasting effects on global industries. [Word count excl. citations: 785]

The US Navy: Are the Oceans Reaching a Boiling Point?

Water: Our World’s Most Valuable Resource!

6 thoughts on “Show Me the Honey: Plight of the Humble Bee”