The oil and gas industry can easily be divided into oil producers and oilfield services companies(OFS). While the oil producers such as Exxon own the assets, the field operations in E&P are done by OFS such as Schlumberger. A bulk of the technology and human capital on drilling platforms is provided by OFS. The OFS sector has invested substantial amounts in R&D to develop superior technologies which have helped improve efficiency . The improvement of technology has been necessitated by different factors (difficult to get oil, oil prices etc) and has almost always proved beneficial. [1]

While technology has come along in leaps and bounds, the human capital required to run operations has been in shortage. From the author’s personal experience and studies done, avoidable incidents have taken place due to faulty decision making at the wellsite.[2] The industry is plagued by talent acquisition-retention and workforce aging problems. [3]

Oilfield operations take place in hazardous and remote locations. The more the number of people of people on the wellsite, the higher is the HSE(Health,Safety&Environment) risk. The cyclic nature of O&G industry means that talent is acquired after recovery starts and when the down turn starts, people are let go. There are costs involved in the hiring, firing and training processes, not to mention the opportunity cost of not being able to take projects. 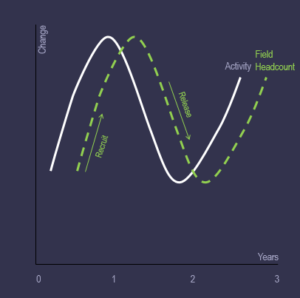 Schlumberger, the largest OFS company, has also been affected by the problems outlined above. In 2009, when recovery started from the last oil bust, Schlumberger (Directional Drilling) started working on implementing a Remote Operations solution which involves the use of technology to automate processes, reduce the requirement of people on rigsite and provide better decision making capabilities in RT(Real Time), thus increasing efficiency.[4]

The traditional model of operations required two directional drillers (DD) and two measurement engineers(MWD) from Schlumberger to be at the rigsite. 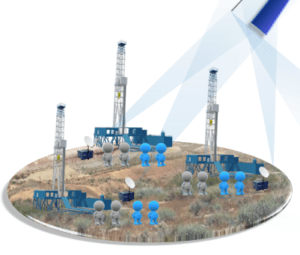 The increase in Internet speed over the last decade was the key enabler for Schlumberger. Software and hardware was developed for controlling equipment at rigsite remotely from an office location. To ensure that service quality did not drop, Standard Work Instructions (SWIs) were developed. At the pilot locations, a remote operations centre(ROC) was created where experienced MWDs (called Remote Ops Engineers – ROE) were located. With the infrastructure in place, one MWD was removed from rig sites and the tasks were performed by the ROE. In parallel, software development was done to ensure that data deliverables were being generated with fewer clicks. Subsequently, based on trial and error, it was determined that one ROE could perform tasks for 3-4 rigs without a decrease in service quality.

Schlumberger also developed its capabilities in the amount of data that could be transmitted from the drilling assembly. Using data analysis software, ROEs were able to come up with higher quality solutions in RT. The ROC also enabled subject matter experts to be closely connected to the field delivery process, ensuring better drilling performance for the client. After the pilot model was established, remote operations were extended to having DDs in the RO Centre. [5] [6]

As expected, oil operators were initially apprehensive and viewed it as a cost optimization measure by Schlumberger. The concept of moving people physically away from critical operations was something that had never been attempted before in the industry. However, success stories such as this one in China, helped establish the value of Remote Operations for the client. Once value was ascertained, operators were more than happy to have less personnel on rigsite and reduce HSE exposure. Of course, adoption in some parts of the world was quicker than in others.

How has Schlumberger benefited? 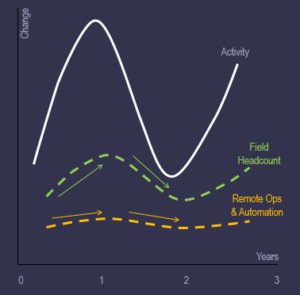 What does the future hold?

The current downturn in the E&P industry has led to a large number of employees being laid off.[7]. However, when drilling activity will pick up, Schlumberger will be able to expand its capacity using remote operations to capture even more market share. Remote Operations have helped provide operational efficiency that has kept Schlumberger going even in tough times.[8]

Orbitz: Turning Digital Distribution from a Challenge to an Opportunity

Can you do your taxes faster than you prepare for a FIN 1 case?