Warmer temperatures have caused a reduction in yield of key crops like hop and barley and negatively impacted water, which makes up 90-95% of beer[i]. Researchers suggest that extreme shifts in precipitation patterns have caused droughts, flooding, and reduced snow melts[ii]. Additionally, rising average temperature increases the likelihood of rain over snow and melts snow sooner, changing the streamflow to rivers in regions such as Colorado[iii]. The dependency of quality, quantity, and pricing of ingredients on climate change has led to many Colorado-based brewers taking matters into their own hands.

New Belgium is a brewing company that first opened in Fort Collins, Colorado in 1988. From the start, they recognized the significant role climate change would have on their core business of brewing beers. Thankfully, they’ve designed and aligned both their business and operating model accordingly to mitigate these risks. Environmental stewardship is a core value for the company, backed by initiatives within the company and in the greater community. For example, New Belgium created a fund to implement energy efficiency efforts and renewable energy projects based on internally taxing itself on energy consumption. They have also integrated this into their operating model by developing goals tied to quantifiable environmental metrics for water usage, emissions, energy, and waste.

The good news is climate change also represents an opportunity for New Belgium to benefit from their sustainability efforts. While large capital expenditures may be required upfront, there are both long-term financial and intangible benefits. A few past initiatives include: 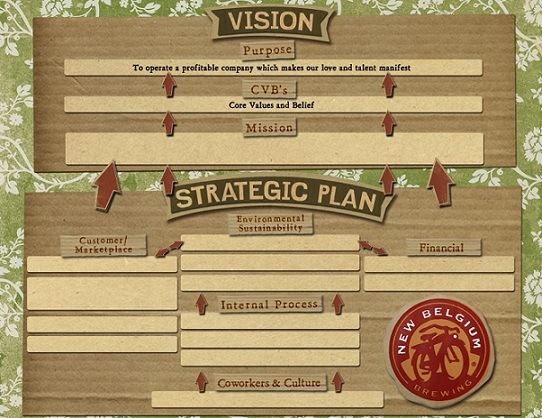 Sustainability is used as a key factor in decision-making processes for strategic alignment[v]. Each decision is made to have policies aligned with their mission of creating environmental stability, which is interdependent with financials and customers. As a result, New Belgium is able to match the incentives for advocating environmental sustainability and selling more beer. For instance, due to the increase in demand and decrease in yield, hops have increased in price over 250% in the past decade[vi]. It is in New Belgium’s best interest to make hop production sustainable and increase the yield to decrease cost of goods sold.

Given climate change pressures, New Belgium acknowledged the need to diversify dependence on natural resources from one region. This past summer, a second brewery opened in Asheville, North Carolina. Instead of cutting upfront costs for PP&E, New Belgium stayed true to their sustainability values and built it as a LEED-certified brewery.  Having this second brewery in a distinct location provided New Belgium access to another clean water source, which helps ensure the taste and quality of their beer is driving top line sales.

Moving forward, they should continue to innovate and invest in R&D to promote sustainability efforts internally. This should not only identify new equipment that is more energy efficient but also more eco-friendly process (e.g., develop a new process for dry hopping that requires less water). It’s in New Belgium’s best interest to remove their dependency on externally energy and resources as much as possible. This would help shield them from future fluctuations in input costs and quality so that they can have as much control as possible over the output. New Belgium should also take partnerships one step further and actually work with other beer companies to reduce industry impact on climate change. They could collectively sponsor or subsidize energy-efficient equipment for other breweries to adopt environmentally friendly operations. The entire brewing industry benefits when there impacts of climate change are reduced to minimize variability for production.

With a double bottom line that aligns their operating model with their community values, New Belgium has in essence turned being environmentally sustainable into a competitive advantage.

Climate Change and Cosmetics: It’s Going to Get Ugly

Wine – a Californian dream – or nightmare?

Student comments on Save the planet, drink more beer.