Home is where the heart is, but exactly where within the home is it? Many would argue that the heart situates itself in the kitchen, and not just because it harbors the snacks that relax us from the stresses of our daily lives. Located in the center of most homes, the kitchen represents a gathering place for the family where important information is shared and plans are communicated. In lieu of an office-style cork message board, the refrigerator serves as the family’s repository for calendars, notes, shopping lists, and cherished photos. Since the 1960s, the method of posting this information has been accomplished almost entirely with refrigerator magnets, a product ubiquitous in gift shops and home furnishing stores [1]. Samsung believes that this decades-long entrenched behavior is inefficient and ripe for disruption with an innovative, differentiated business model.

Enter the Samsung Family Hub Refrigerator, an appliance that leverages the internet of things to become a one-stop destination for hosting family information—in addition to just keeping the groceries cold. This fridge sends you updated pictures of the contents inside (reducing food waste), and has a 21 inch HD LCD touch screen that displays notes, photos, calendars and artwork [2]. Furthermore, audio and television can be directly streamed onto this screen [3]. By providing all these features, Samsung’s refrigerator strives to create ample value for consumers such that life without an internet-enabled fridge would resemble life without an internet-enabled computer. 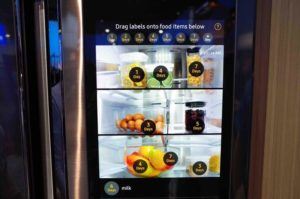 As proof of the excitement for these ‘smart-home’ products, Samsung received the most social media mentions at this year’s Consumer Electronics Show in Las Vegas [4]. A number of tweaks Samsung made to their operational model to adapt to a rapidly changing market could very well explain some of the hype. While Samsung historically tended to internally develop hardware and software, the Family Hub Refrigerator was instead sourced from a small San Francisco based startup called Sticki [5]. Likewise, the company established a strategic partnership with Nuance Communications, who developed an integrated “far talking” embedded voice technology that facilitates the activation Family Hub products from anywhere in the room [6]. 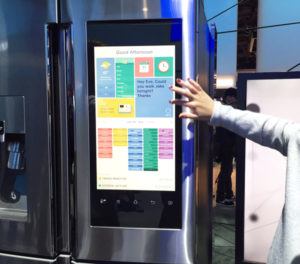 While Samsung has taken a major stride towards advancing the functionality and value of the family refrigerator, many skeptics have expressed doubts regarding the prospects of commercial success. One factor involves the suggested retail price of the Family Hub Refrigerator: nearly $6,000. At this price point, Samsung’s appliance is over 500% more expensive than the average baseline side-by-side refrigerator [7]. Furthermore, rapid growth in the smart-home device sector is not expected to occur. Today, only 6% of American households have a smart-home device, including internet-connected appliances, home-monitoring systems, speakers or lighting; in five years, this number will gently rise to 15% [8]. In a similar vein, 72% of people have no plans to adopt smart-home technology in the next two to five years and are generally unwilling to pay for it [8]. Finally, refrigerators have an average lifetime of 6-15 years, far longer than that of a tablet computer. Thus, ten years into the future, consumers will be stuck with outmoded touchscreen functionality [9].

Samsung can potentially take a number of steps to avoid the pitfalls that lie ahead of them in this market. One enticing option could involve modularizing the tablet from the rest of the refrigerator. This action would have the effect of lowering the total price by permitting the consumer to purchase the compatible tablet at a future date, when it was deemed more critical. Additionally, modularizing the tablet would allow the consumer to make significant hardware updates as this Family Hub technology developed without having to find a completely new fridge. Samsung has another option for reassuring those skittish of smart-home technology, especially of appliances that operate on proprietary software and hardware: they could choose to allow their fridge to run on open-source software or even with non-Samsung tablets. In this way, the consumer’s fear of being locked into the ‘Family Hub’ environment could be assuaged.

Alas, only time will tell when families will choose to swap out their novelty analog fridge magnets for an ‘evolved’ digital solution.

Whirlpool: Are these the appliances of your dreams?

A Bright Driverless Future for Siemens