In the beginning of May, a small company called Ingevity spun off of WestRock, the packaging conglomerate formed from the merger of MeadWestvaco and RockTenn. This division of WestRock was a curious little engineering group that was responsible for what essentially amounted to recycling the byproducts of packaging production. Their performance chemicals group transformed crude tall oil (the sap produced when turning trees into paper) into high value derivative products such as pavement, lubricants, inks, along with other products that were traditionally manufactured with crude oil. However, it is the performance materials group and their proprietary method of manufacturing activated charcoal that developed technology which now recovers 3.7 million gallons of gasoline per day that would otherwise escape into the atmosphere. [1]

In the 1970s, Ingevity’s engineering team was grappling with what to do with the enormous quantities of hardwood sawdust they were producing as they turned trees into paper. The developed and patented a method for producing sulfur activated charcoal, a process involving extremely hot sulfuric acid which created a type of activated charcoal with a significantly higher butane working capacity (BWC) than traditional thermal activated charcoal. The company discovered that this new charcoal was very effective at capturing gasoline fumes. They also discovered that when they ran air through a piece of charcoal that was soaked with gasoline fumes, pure gasoline came out the other side. They took this charcoal and fitted it into containers and placed them between the gasoline tank and the engine of a car. When the car was parked, the gasoline would slowly evaporate and fill up the charcoal. The next time the car was turned on and driven, airflow would move through the charcoal, converting the fumes back into gasoline and forcing them into the engine, reducing the loss from a single day of parking. [2]

Over the subsequent decades, Ingevity continued to improve on their product and design, ultimately creating a honeycomb structure known as a monolith which had a BWC of 17. In the below chart, you can see the evolution of their sulfur activated charcoal offering. 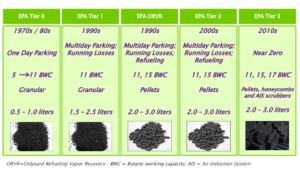 Today, in an age where preventing climate change is more important than ever, the innovation that Ingevity committed itself to in the 70s appears to be an investment that returned well beyond its expectations. Not only is Ingevity the leading producer in the world of automotive activated carbon, they are the only player in gasoline emissions loss control devices. Though conveniently left off of their company slides and SEC filings as to avoid attention, Ingevity is the only company automobile manufacturers trust when it comes to these devices for their cars. Looking at the recent Volkswagon emissions scandal, we can see why OEMs are not willing to take a risk with a new and unproven manufacturer over a device which costs under $50 per vehicle.

This project that began primarily for the North American market has become the standard worldwide for gasoline emissions. We see this through the ongoing development of regulation in Europe and China. Euro 6 [4] and China 6 [5] are two new pieces of regulation that adopt very high standards and take the highest US standards (LEV) [6] and apply them in different regions. It would not be possible to enforce these regulations without multi-decade innovative project at Ingevity that created these emission loss control devices.

The trend of adopting the state of the art technology to rapidly address the growing concern of climate change is something that is likely to continue for many decades and this will be a tailwind in Ingevity’s sails. As the current pieces of regulation (China 5 and Euro 5) continue to be adopted, we can expect to see Ingevity’s dollar share per car worldwide increase as the technology is incorporated beyond North America. Ingevity has anticipated this and recently constructed two new factories in China to satisfy this demand.

Going forwards, Ingevity needs to develop a plan for what to do as consumers shift to electric vehicles. Ingevity should work on developing a solution for capturing escaping fuel during the energy production process in plants. While we may not continue to burn gasoline in our cars, we will likely continue to have fossil fuels somewhere in the energy process for many more decades. They have not yet approached this because they have not yet felt the need; however, going forwards, they are likely to face pressure from the shift in consumer demand.

Climate Change and the Department of Defense

Student comments on Running on Fumes