For decades, the United Kingdom has served as an important hub in Europe for global automotive manufacturers, with the country’s production volume reaching a historic high of 1.7 million cars and $226 billion in 2016 (approximately 10% of British GDP) [1]. Toyota, in particular, has established a sprawling manufacturing presence in the UK since December 1989, with its national operating capacity spanning two plants and representing a total investment value of £2.5 billion and about 3,000 employees [2].

Toyota’s Footprint in the U.K. 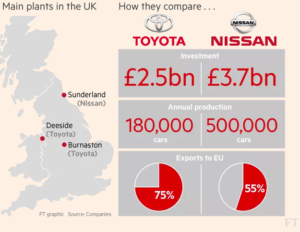 Impact of Isolationism on Automotive Manufacturers in the U.K.

The increasing wave of hardline conservative ideologies sweeping across the globe ushered candidates and legislatures to power with a mandate to enact protectionist trade policies. Consequently, on June 23, 2016, the British electorate voted by a majority to leave the European Union by March 2019 [3].

Implications: The exit of the U.K. from the EU (“Brexit”) will present unique challenges to automakers such as Toyota with manufacturing bases in Britain but deeply entrenched supply chain networks across the entire EU bloc. The success of the English automotive industry has relied on several factors, but its unfettered access to the EU Single Market remains the primary success factor [4]. Furthermore, the extent to which Brexit disrupts Toyota’s supply chain will be determined by how much the following factors are affected: tariffs, foreign exchange rates, the U.K.’s labor market regulations, immigration laws and tax policy [5]. As the British government opts for a “Hard Brexit” (stipulating both a departure from the EU single market as well as a restriction on the free movement of people into its borders), it is estimated that there would be a shift to standard WTO tariffs on all exports and imports (2% to 13%), a 10% increase in the cost of U.K. labor and a 20% depreciation in the British pound [5]. This equates to approximately £2 billion in losses for the U.K. automotive industry [6]. 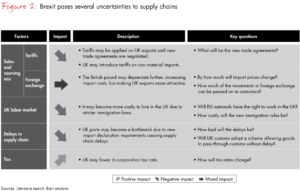 Short-term: In response to Brexit, Toyota has reaffirmed its commitment to the U.K. as its strategic manufacturing hub in the near term and has sought further clarity on the Brexit deal from the British government. On March 16, 2017, the automaker announced plans to invest £240m into modernizing its car plant in Derbyshire despite the impending EU departure [7]. Toyota will also look to source more components from the UK, which could offset the impact of currency fluctuations and soften the blow of WTO tariffs.

Long-term: However, continuous competitiveness of Toyota and other automakers in the long-term hinges on a comprehensive and bespoke trade agreement – one that provides for the U.K. to stay in the Single Market and customs union until a new relationship has been consummated [8]. Johan van Zyl, president and CEO of Toyota Motor Europe maintained: “Continued tariff- and barrier-free market access between the UK and Europe that is predictable and uncomplicated will be vital for future success.” [7].

In a strong vote of confidence in its future U.K. prospects, Toyota has publicized its intention to build its future Auris model (commences production in 2021) at its Burnaston plant if the government secures a transitional Brexit deal. This would help reassure Toyota of an avoidance of a “cliff-edge” reliance on WTO trade rules in the interim period [9]. Under the transitional deal, there would be a two-year moratorium used to negotiate a comprehensive trade deal between the U.K. and the EU, granting U.K. businesses continued free access to the EU’s market when the U.K. formally exits the EU, with little change from current arrangements.

What else should Toyota do?

Toyota will need to tackle the supply chain overhang head-on to remain competitive in the U.K. and broader European market.

Buy Local: First, it would need to consolidate as much of its supply chain as possible, domestically within the U.K. to minimize production costs after Brexit. Only about 40% of components within a U.K. assembled car are sourced locally [4]. That number will need to increase.

Seek concessions: Second, as a low-margin manufacturer that caters to the mass market and relies heavily on exports, Toyota should seek to get concrete guarantees on a transitional deal from the government as soon as possible. Nissan was able to secure concessions as a requirement to keep production of its Qashqai and XTrail models at its Sunderland plant. Toyota can use its own leverage to extract a similar deal.

There are a couple of questions Toyota will need to address going forward:

Walmart: From Supply Chain to Blockchain

8 thoughts on “Royal Roadblocks: Toyota’s Fight for Auto Primacy In the Age of Isolationism”