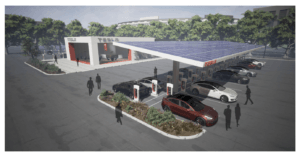 The future is electric

Battery electric vehicles (BEVs) are here to stay. A significant reduction in lithium-ion battery prices, increasing commitment from automakers to prioritize BEVs and supportive legislation are fueling a rapid growth in BEV customer acceptance. By 2040, it is estimated that 54% of new car sales, and 34% of the global vehicle fleet will be electric [1].

From hydrocarbons to electrons

Functionality and competitive pricing play key roles in the global transition to BEVs, but electric mobility at mass scale cannot succeed without the right charging infrastructure. Electricity consumption from BEVs is expected to rise from 6TWh in 2016 to 1800 TWh in 2040 – representing 5% of global power consumption in 2040. This projected electricity consumption would offset fossil fuel demand by 8 million barrels of transportation fuel per day [2]. In addition, electric vehicles will have a different “refueling” profile than traditional internal combustion engine (ICE) vehicles because BEVs are not required to head to the refueling station every time they’re running low on energy. Rather, electric vehicles can take advantage of existing electricity infrastructure to charge whilst parked at home, work or during errands – which on average amounts to more than 90% of a given day [3]. In other words, the weekly trip to the gas station will no longer be as relevant, and charging “on the go” will mainly occur on long distance trips when driving time exceeds a vehicle’s idle time.

To stay relevant in an electric future, gas stations must adapt their supply chain and services. Currently, gas station rely on a complex system of pipelines, rails, barges and tanker trucks to deliver transportation fuels (gasoline, diesel, ethanol, biodiesel). In the future, this supply chain will be swapped out for electrons coming via the grid or via on-site renewable energy sources. 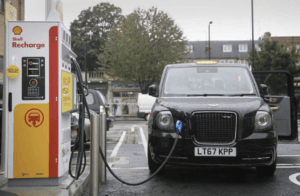 Royal Dutch Shell, one of the world’s largest fossil fuel companies, is preparing for the required diversification beyond fossil fuels. Today, the company and its subsidiaries manage Shell gas stations across the world, and service more than 20 million motorist a day [4]. In an effort to accommodate their motorists’ future needs, Royal Dutch Shell just revealed that they are acquiring NewMotion [5], a Dutch electric charge point and charging service provider. NewMotion has installed more than 50,000 charging locations across 22 European countries, and holds expertise in charging solutions for residential, commercial and enterprise purposes [6]. In addition to the NewMotion acquisition, Shell is rolling out “Shell Recharge” to provide fast-charging services at select gas stations in the UK and the Netherlands. Shell has targeted 10 new charging stations by the end of 2017, and will continue expanding through 2018 [7]. Other countries are expected to follow, but Shell has not confirmed a specific European expansion plan [8]. Shell Recharge is mainly targeting long distance BEV travel, which requires fast charging stations to ensure a vehicle can be recharged in 20-30 minutes. Currently, Tesla is considered the most serious player in the fast-charging space with its proprietary Supercharger network. Since 2012, the electric vehicle manufacturer has built more than 5400 Superchargers to enable long distance electric travel across America, Europe, Asia and Australia, and the company is planning to double the network by 2018 [9].

Acquisitions and small-scale charging station roll outs are all well and fine, but Shell must take big steps if they are to succeed as a leader in the transition from Big Oil to renewables. Deployment-wise, the company should ensure they grow beyond the first two “pilot” countries in an effort to build a network, rather than individual test sites. As laid out above, the BEV charging cycle differs significantly from combustion vehicle needs, and to match their customers’ needs, Shell must focus on innovation and stay clear of simply adapting the “gas station” model to electric vehicles. In other words – a change in supply chain should also lead to an overhaul of their gas station business model. To this end, the company will definitely gain valuable knowledge and experience from NewMotion, but should also seek advice from the most prominent player in the field: Tesla.

Although the future looks to be electric, the scale and rate of technological advances will impact gas station supply chains and services. Can we rely on current estimates of BEV adoption rates? How will autonomous vehicles impact refueling needs? Are gas stations as we know them a dying breed?

Coca-Cola Using Carbonation to Drive a Nation towards Climate Change

Student comments on Royal Dutch Shell: From Hydrocarbons to Electrons