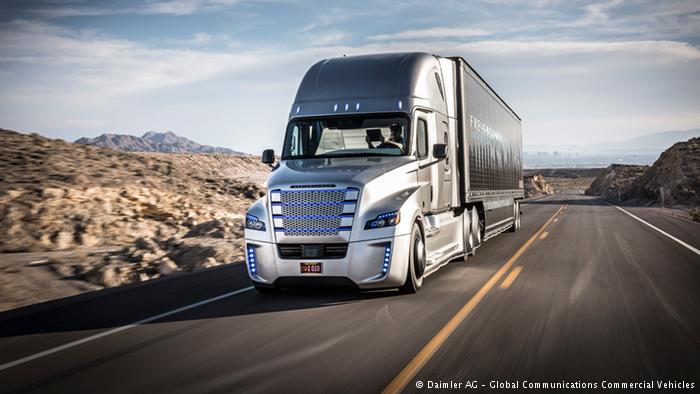 The concept of driverless trucks isn’t new, but it is much closer to reality than most people realise. Although, we are still a little way away from removing drivers completely from behind the wheel, one thing is clear – it is not technology that is stopping that from happening; the regulations just haven’t caught up yet. Not to mention the inevitable backlash from disrupting an industry that employs millions in the United States alone (American Trucking Association, 2016).

From an opportunities standpoint, driverless trucks promise safer, more efficient performance. Imagine a future where trucks can drive for 24 hours if they needed to, effectively doubling their utilization in some cases. No longer would they have to pull over because the driver needs to eat or take a fatigue break. The mining industry has been a great testing ground for autonomous automakers – there are wide open spaces, limited interactions with people and other vehicles, not to mention due to the inherent risky nature of mining, there is a great incentive for these companies to use technology instead of people. At this very moment, there are up to 45 driverless trucks transporting iron ore in two Australian mines owned by Rio Tinto (The Guardian, 2016).

Daimler, the German multinational automobile corporation, who owns Mercedes Benz, has been one of the leaders in driverless technology. Their focus on innovation has been unwavering over the years, placing them in a very strong position over their competitors. In September 2015, Daimler became the first automaker to receive official permission to test autonomously driving vehicles on public roads in California in the United States. And since October 2015, the first autonomously driving series-built truck, a Mercedes-Benz Actros with Highway Pilot, has been undergoing road tests in Germany (Daimler, 2016).

Although the benefits of driverless technology are many, it is understood that driverless trucks will mean millions of jobs being displaced all over the world. The economic losses due to this disruption may not always clearly outweigh the benefits and steps will need to be taken to ensure acceptance. For one, there needs to be a clear dialogue between autonomous automakers and the trucking community. I believe the way to get their buy-in would be to frame this opportunity in a way that doesn’t make millions of jobs redundant, but to modify those roles to match what the technology needs at the time. For example, until regulations catch up, drivers will still be required to sit behind the wheel, and using them to fine tune the technology or training them to be the “optimizers” of the system would be a positive step. Companies will need to invest in training these low-skilled workers, who would otherwise find it hard to find jobs in an increasingly technology driven economy. Equipping trucks or other vehicles with tools or materials to upskill themselves would allow them to transition to other roles easier.

Companies like Daimler will also have to ensure that they have the right people to fill in any skills gaps within their own organizations as the driverless technology sector continues to grow (Harvard Business Review, 2016).

Lastly, technology such as this would require many legislative changes. The technology itself isn’t too far away but it would be a mistake to think that acceptance of driverless technology will be smooth. Steps will have to be taken now to think through some of the legislative and ethical questions that arise from giving full control to driverless technology (The Guardian, 2016). Insurance companies will have to rethink their strategies and numerous other second tier effects will be felt across industries. Companies like Daimler will be key players in these conversations and will have to be at the forefront in insuring that consumer interest and adoption don’t become the limiting factor in an otherwise amazing opportunity.

Optimizing the Happiest Place on Earth

Student comments on Robots vs. Truckers