From Gas to Green

Most companies struggle to adapt to climate change. Yet there are some who make great strides in preserving our terrestrial existence. In the US, huge efforts are being made to increase the production of sustainable energy. And rightfully so – electricity is the largest contributor to carbon emissions, accounting for 29% of total emissions in 2015 [1]. 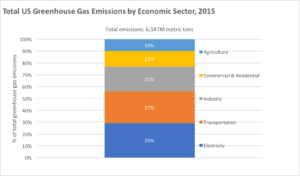 Transportation comes in a close second at 27% (Figure 1). Just like electricity, transportation is a universal and recurring theme throughout the world, especially in urban habitats.

Making transportation more efficient opens up new possibilities in the shapes and sizes of our future vehicles. The cars of the future will be optimized for power utilization, weight, and route. A study by researchers at the University of Washington in Seattle, Oak Ridge National Laboratory and University Leeds in the UK showed that innovations in transportation, such as a lighter-weight body and a reduction in aerodynamic energy consumption – by automating cars to drive in a tight formation – could reduce global carbon emissions by 23 to 25 percent [2].

A sleek design and efficient lithium-ion batteries are important. But so is the algorithm that oversees the driverless drive. Herein lies the magic of NuTonomy, an MIT tech start-up that aims to tackle urban driving, one of the most complex aspects of driverless technology. To test their driverless vehicles, NuTonomy recently announced a partnership with Grab, Uber’s biggest competitor in Asia [3].

NuTonomy was founded at MIT in 2013 by Emilio Frazzoli and Karl Iagnemma, who worked on robotics and intelligent vehicle navigation. They have raised a total of US$16M, led by Highland Capital Partners, with participation from the Singapore Economic Development Board (EDB), Ford Motor Company and other existing backers including Signal Ventures and Samsung Ventures. NuTonomy’s partnership with the Singapore government is a win-win deal – with its limited land area and an ageing workforce, Singapore is keen on optimizing its public transportation system and actively encourages its residents to use public or shared modes of transportation [4].

A study in Nature Climate Change published in 2015 forecasted that emissions per mile from the use of personal vehicles could be reduced by as much as 94% by 2030 in the “best-case scenario”, where electric autonomous taxis are launched and successfully commercialized [2]. Driverless taxis can create the greatest impact when combined with ride-sharing services. The study highlights that with increasing demand for travel, optimizing and reducing energy consumption in transportation systems has never been more important. As Tesla and Google continue to engage in an arms race for driverless technology supremacy, the rate of innovation is likely to accelerate – meaning that driverless taxis may be a reality as soon as 2025 [2].

NuTonomy’s first public trial will be an audacious testament to their advanced software. Gearing up for the launch of their full vehicle fleet in 2018, NuTonomy has raised a Series A round of about US$16M in 2016 to complete their trials. In similar fashion, Uber acquired Otto, a self-driving trucks start-up, and formed a US$300 million alliance with Volvo Car Group to develop self-driving cars [5].

The adoption of driverless cars faces many challenges. One is regulation. But NuTonomy is cleverly strategic – Its partnership with the Singaporean government allows it to thrive under favourable regulatory conditions. Its Singapore test bed is a major asset for its growth plans in Southeast Asia. These days, one can see the NuTonomy vehicles whizzing around One North, Singapore’s innovation hub. But soon, should the trials succeed, NuTonomy’s algorithms could well replace the steering wheels of Grab drivers.

Like most innovative companies developing cutting-edge products to disrupt the status quo, NuTonomy isn’t saying that it is the silver bullet in the fight against climate change. Self-driving technology is merely one of many avenues to reduce carbon emissions. Global warming is a call to action to all stakeholders – governments, large auto manufacturers, startups and consumers – to embrace clean energy and efficiency in the way we travel. And as such, driverless technology, along with leading-edge car design and high-quality lithium-ion batteries, are all necessary technological breakthroughs to enable a cleaner and greener future.

Now imagine this – a self-driving car carrying your family of five on a highway spots a bouncing ball ahead. As the vehicle approaches a child runs out to retrieve the ball. Should the car risk its passengers’ lives by swerving to the side – where the edge of the road meets a steep cliff? Or should the car continue on its path, ensuring its passengers’ survival at the child’s expense? How should it decide?

This scenario and many others pose moral and ethical dilemmas that carmakers, car buyers and regulators must address before vehicles are given full autonomy.

Fight or Flight? Boeing and the Intensifying Risk of a Global Trade War

Anheuser-Busch InBev’s Contribution to – and Solutions for – Climate Change

Student comments on Robocabs Join the Fight Against Climate Change