Rio Tinto’s operation in the Pilbara is the second largest exporter of iron ore in the world, integrating 16 mines, four port terminals, and 1,700 km of rail and related infrastructure [1]. The complex is expected to produce and ship approximately 330 million tonnes in 2017 [2].

Rio Tinto markets iron ore tailored to the needs of steel mill consumers, an example being the Pilbara blend. No single Rio Tinto mine can produce the blend, so the company must plan the final product by adjusting and sourcing materials from its remote mines, tracking the material, mixing the final product, and shipping it [3].

Mining operations have historically acted as independent entities that exhibit significant production variations on any given day. Mines had generally infrequent communication between themselves, and decisions were often made in the field, with limited information. With big-data and autonomous systems, new opportunities for big-picture, real-time decisions have emerged.

Rio Tinto has seized these opportunities, integrating multiple complex operations through an Operations Center in Perth, which supports and oversees its production network. From this nerve center, operators oversee a fleet of mobile equipment, including self-driving haul trucks and a network of autonomous trains [4].

In Q2 2017, around 20% of Pilbara tonnage was transported autonomously by rail the mine sites to the port through a technology that Rio Tinto calls Autohaul [2]. Rio Tinto plans to complete the project by the end of 2018, transporting approximately a million tonnes a day of iron ore from its Pilbara network autonomously [2]. Tests have already shown reduction of variability and throughput time of iron ore transportation [Exhibit 2], which will lead to lower hauling costs, more efficient blending operations, and reduced bottlenecking at material transfer sites. 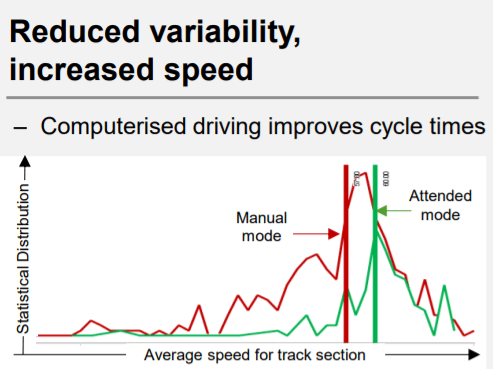 Unlike the operations of the past, which stopped for shift changes, autonomous equipment can operate 365 days a year, 24 hours a day [5].

Rio Tinto will be able to make use of its operation center and integrated operations to drive maximum efficiencies from its assets. Beyond debottlenecking, the miner will be able to draw conclusions from its massive sensor data, using its mobile fleet’s aggregate history to respond to sensor reports, pre-emptively moving equipment which report problems into maintenance, rather than suffering equipment damage or undertaking less efficient, reactive maintenance. Sometimes components may even last longer than advertised – Rio Tinto will be able to predict component failure times from its own data, rather than needing to rely on guideline specs provided by the manufacturer [6].

In the short and medium terms, management will have to fine-tune the Pilbara material transport network, identify the next target sites in the firm for rollout of the existing tech, and identify what other mining processes can be rendered autonomous economically.

Total supply chain visibility will present several competitive advantages in the future for Rio. The firm should be able to push on or cut out external traders simply by being more effective operationally. Through synchronization, coordination and automation within its production chain, Rio Tinto could disintermediate existing trader networks by knowing its position relative to the market at any moment. [6]

Visibility combined with autonomous control could allow Rio Tinto being able to change its product mix rapidly, responding to short-term price variations between iron ore blends. If Rio’s operations are able to flexibly adjust their production to demand (almost unheard of in the industry), the firm’s sales and marketing arm could capture more value in the marketplace.

In this vein, the organization should explore how integrating ships, traditional or autonomous, into the Rio Tinto Pilbara Operations network will allow the firm to further reduce costs and drive margins.

Rio Tinto will be able to mine both data and rock to maintain its position as a flagship natural resources firm. But its technology also poses several dilemmas.

New mines will always need to be built. Communities have been open to mines in part due to the jobs the industry creates. As mining continues to automate, there will be fewer jobs in the space. Those that remain will be far from operations and require more schooling than existing positions. If the mines do not provide significant employment opportunities to communities in which they operate, the mines risk their social license to operate, and projects may be difficult to start. To what extent should the industry automate?

Can Rio Tinto remain a technological leader in this space as a mine operating company facing startups and tech giants? Is it more cost-efficient for Rio Tinto to push forward on this technology itself, or should it seek partnerships with other operating companies? Could value be created by selling advice or in-house technology to other firms?

The Best Supply Chain in The World