WeWork is a fast-growing startup that provides shared working space to companies, non-profits and individuals. Founded in New York in 2010 by Adam Neumann and Miguel McKelvey, it has grown to 82 offices in 18 cities, 35,000 members and 200m+ of revenue while staying profitable. It is set to adapt the working space to the 21st century, by creating a business model that takes into consideration the different needs of its stakeholders and developing an underlying operating model that supports it.

WeWork leases office space from landlords and real estate brokers – through long-term contracts –, works with developers to refurbish the space, and, finally, offers small parts of the space along with some added perks to tenants on a short-term basis. It has a tiered pricing that allows different customers – from freelancers to large companies – to benefit from its offering, depending on their needs and willingness to pay (Figs. 1 and 2). 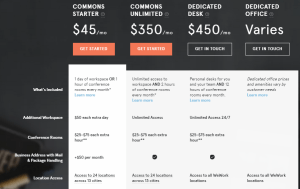 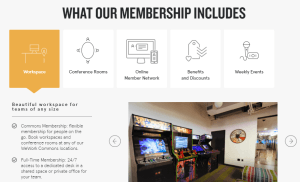 WeWork is able to satisfy both startups and its landlords by providing flexibility to the former (charging monthly rates) and certainty to the latter (long-term contracts). However, since it is a fixed cost business, to succeed it needs to keep utilization of its offices high. This is especially hard because startups have risky business models which may lead them to scale out of WeWork or fail – in which case they may stop being WeWork customers – which is why the operating model is so important.

The operating model of WeWork is based on 3 main pillars: office space and design; community; technology and complementary services.

It all starts with office space. WeWork has a dedicated team which leverages software to look for undervalued office space that they believe could be a good place for startups. Besides that, it uses historical real estate price data from its existing offices to establish long-term relationships with real estate brokers and show prospective lessors that WeWork has consistently increased the value of its offices and surrounding areas and get cheaper rates. WeWork also has a team of architects and interior designers who have a streamlined process and accumulated knowledge that allows them to assess and quickly redesign new offices to create a startup friendly environment. They create a mix of diverse working spaces to fit different people’s needs (small offices, big open-spaces, meeting corners, conference rooms) and social areas (common areas, bars, arcade machines, foosball, etc.) where people can meet each other on a more relaxed environment, all with a design developed to foster creativity and adapted to the local community context (e.g.: http://fortune.com/2015/03/05/wework-utopian-vision/).

Community is perhaps the biggest focus of WeWork. Both founders have experience with its power – Neumann grew in a kibutz in Israel and McKelvey was raised in a five-mother collection in Oregon – and soon realized that it could be their advantage. To achieve this goal, they have created an office space that fosters creativity and human interaction, hired community managers and gave them considerable power in the organization, created a social program (including parties, retreats and happy hours) that members rave about and have fostered diversity within the community (Fig. 3). This creates not only a sense of belonging, but also business opportunities for its members – both startups and big companies which have been increasingly interested in having people in WeWork offices. 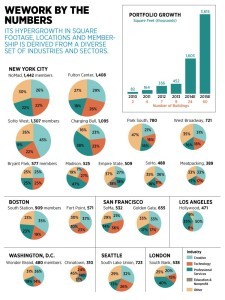 Since the onset, WeWork has leveraged technology to provide its tenants the most seamless experience possible. From making its IT infrastructure (e.g. broadband, printers, conference rooms’ equipment) easy to use, to creating internal tools (e.g. internal social network), it has consistently used technology to make the lives of its tenants easier. As WeWork grew, it started to take a more holistic approach to solve the needs of startups and created partnerships with other companies to provide additional services and perks which solve their key pain points – from HR and health insurance, to cloud hosting, legal services and payment processing.

WeWork’s operating model allows them to get office space at a lower cost and deliver superior value to its customers through its unique community, superior office space design and complementary service offering. This allows them not only to acquire customers fast (having >80% utilization by the launch date in some offices) but also to have very loyal WeWork members (even after they leave the workspace). This creates significant network effects, hence mitigating WeWork’s business model risks. It’s true that due to its hefty valuation, exposure to economic downturns and current lack of direct competition, it’s not clear whether WeWork will succeed, but I think that, as long as it can keep its operating model while growing, it will redefine how we work.

Chipotle: The birth of the fast-casual concept

FCB: The Healthiest Club in Europe?

Student comments on Redefining how WeWork