On December 8, 2015 Outerwall (NASDAQ:OUTR), of which Redbox makes up >75% of revenue, plunged 23% on an aggressive earnings forecast slash and shake up of the Redbox management team[1]. This announcement likely signals the inevitable death knell for the “Blockbuster killer”, as its physical DVD distribution points struggle to stem the rising tide of streaming content.

Founded in 2002, Redbox pioneered the DVD-rental kiosk market. Prior, the brick-and-mortar rental model dominated, giving customers significant selection but charging high prices and late fees. As volume decreased, retailers increased prices to offset high fixed costs in a “death cycle” that opened up the market to disruption. Redbox entered with small-footprint kiosks located in high traffic areas (e.g., grocery stores) that limited selection to newer titles and only charged $1 per night for each DVD.

This innovative approach to fixed-point rentals, along with the rise of the Netflix subscription model, crushed brick-and-mortar providers, with Hollywood Video declaring bankruptcy in May 2010[2] and Blockbuster closing its remaining stores in November 2013[3]. At that point, Redbox owned ~50% of the physical DVD market[4] – we will see below why this Pyrrhic victory was short-lived as the operational decisions – juxtaposed with Netflix – made by Redbox set it up for failure:

Netflix took a centralized inventory approach – it spread a couple dozen distribution centers throughout the United States, so for a given N of a particular DVD the supply could service overall demand variations with less friction.

Redbox took the opposite approach – tens-of-thousands of individual distribution points each with a set supply of DVDs. For the same N of a particular DVD, the required precision to match supply and demand at an individual box to maintain high asset utilization was too title, demographic, geographic, etc.-specific. Therefore, in order to fulfill customer availability expectations, excess inventory – depreciating quickly after release – would have been required. Any inability to perfectly manage title permutations at a given location would exacerbate each other within the broader system, compared to the Netflix pooled approach. With limited ability to economically shift titles across kiosks, the utilization of an individual DVD would be “set” at the initial procurement and allocation decision; likely resulting in lower per-DVD utilization due to various levels of excess inventory. When inventory levels ran low, Redbox sent employees to purchase emergency DVDs at retail prices in Wal-Mart and Target. Up to 40% of overall purchases were done in this inefficient way.[5]

Due to its centralized inventory management, Netflix incurred very little cost beyond acquisition costs for an individual new subscriber. Instead, its model was burdened by high variable costs – namely postage costs for mailing DVDs. While this limited profitability in the short-term – the company expected to spend $600M on postage in 2010[6] – it created a flexible operating model, enabling growth.

Redbox growth required expanding its kiosk distribution network. This approach created a two-fold fixed cost bind: first, it required significant capital to grow; second, each kiosk was burdened by both on-going servicing costs (e.g., locally optimizing inventory) and maintenance capex (e.g., replacing screens, upgrading interfaces). As Redbox kiosks proliferated, it is not a stretch to believe that the incremental kiosk was likely a.) less desirable and b.) cannibalized nearby kiosks. If you combine this with the shift away from physical rentals toward streaming (see graph), the volume decreases create a “death cycle” of fixed assets and lower per-asset profit that is no different than the pinch Redbox initially created for Blockbuster, et al. 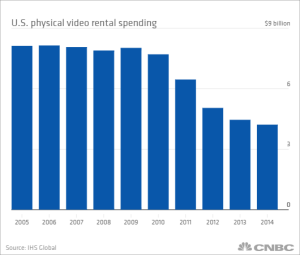 Redbox was disadvantaged from the start – it not only had to use its cash flow to service and invest in the physical infrastructure of its kiosks (discussed above) but also to support similarly capital-intensive coin-processing[7] and material-recycling[8] kiosk businesses. Furthermore, the company executed around $1B of stock buy-backs from 2010 – 2014 to appease investors.[9] Unable to make a “bet the company” plunge into streaming, Redbox finally got around to launching Redbox Instant in 2012[10]. At a similar price point to Netflix, with vastly inferior selection, Redbox hoped its partnership with Verizon would allow it to make up ground. However, it not only had to contend with Netflix but also Hulu, Amazon, et al. spending billions in aggregate on content (see graph below). At this point content acquisition costs were being bid up far above what Netflix had locked in as a first-mover. When combined with data infrastructure costs to support streaming, the new venture faced significant viability questions. Less than two years later, Redbox Instant was shut down in October 2014[11], leaving the company with only its legacy kiosk business and accompanying challenges described above. 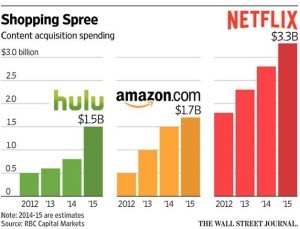 Redbox attempted to provide cheap, convenient content to the masses. A shift toward streaming content should have been a “no-brainer” but its legacy operating model decisions and failure to move first doomed its ability to compete in an industry increasing turning away from physical content distribution.