A flower has sprouted in the street.

A flower, still pale, has fooled the police,

it’s breaking through the asphalt.

I swear that a flower has been born.

Its color is uncertain.

It’s not showing its petals.

Its name isn’t in the books.

It is ugly, but it really is a flower.

and fondle with my fingers this precarious form.

It broke through the asphalt, tedium, disgust, and hatred.

As Dame Judi Dench poignantly read the above translation of “Nausea and The Flower,” a poem by Brazil’s Carlos Drummond de Andrade, at the opening ceremony of the 2016 Summer Olympic Games, the world took notice: Rio de Janeiro brought the conversation about climate change front and center at the Olympics.

In a ceremony broadcast to an estimated primetime audience of above 3 billion,[1] the organizers devoted an entire segment to stark warnings about rising sea levels and global warming. The traditionally five-colored Olympic rings were unveiled in an all-green version. The cauldron had a low-emission design alluding to the power of solar energy. Reaction was immediate: The climate change focus headlined ceremony reviews.[2]

While most praised the initiative,[3] some wondered what the Olympics have to do with climate change.[4] The answer, as it turns out, is: A whole lot. A recent study published in the journal Lancet shows that climate changes poses a threat to the very existence of the summer Olympic Games as we know today.[5]

The study forecasts the impact of climate change in major cities in the northern hemisphere across four dimensions – temperature, humidity, heat radiation and wind – along the upcoming decades, and then compares the data points against safety standards currently used by the International Olympic Committee (IOC) to assess a city’s bid to stage the Games. These standards range from athlete health safeguards to likelihood of event cancellation due to extreme weather conditions.

The findings are striking: By 2085, only four cities in the northern hemisphere – Belfast, Dublin, Edinburgh and Glasgow – will meet the IOC’s criteria to host the Games. In all others, rising temperatures and humidity will cause heat stress to limit the viability of outdoor endurance events. Traditional summer Olympic events such as the marathon, race walking and road cycling will be particularly life-threatening for athletes.

In addition to putting athletes’ health at risk, climate change will also compromise the commercial viability of the Olympics as a major sporting event. “Risk of unpredictable disruption of an event that involves billions of dollars, years of planning, hundreds of thousands of people, and massive global media attention would greatly reduce the attractiveness of a venue, particularly if the disruption is required to avoid serious risk to the athletes,” warns the study. Moreover, the breaking of records will be in jeopardy, as high temperatures are not conducive to athletic breakthroughs. 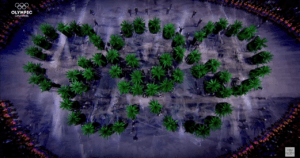 The IOC has already started taking steps to address the effects of climate change on the Games. In addition to using the Olympic opening ceremony spotlight to educate a global audience on the perils of global warming, it has included a defense of sustainable practices in its Olympic Agenda 2020,[6] whose aim is to address challenges faced by the Olympic Movement. Olympic organizers have also fostered discussion specifically on the impact of climate change to the Games. For instance, the Rio organizing committee sponsored a symposium titled “Climate Change: What The Olympics Have To Do With It?” before the Games.[7]

While these are praiseworthy efforts, the IOC and local organizing committees will likely have to both adapt existing Olympic protocols and invest heavily in the battle against global warming.

In terms of adapting existing protocols, the study mentions hosting outside events indoors as a possibility. This would, however, cause the undoing of Olympic staples such as the marathon, with damaging consequences to the Olympic brand. As Achim Steiner, executive director of the UN Environment Program puts it, “The outdoors have been the arena for athletic achievement for thousands of years and today this tradition is nowhere more on display than at the Olympic Games.”[8]

Other adaptive measures would be hosting summer Olympic events at night, in the winter or in a permanent site; requiring athletes to wear heat resistant gear; or simply removing endurance events from the Olympic portfolio. Any of these measures would face significant pushback from a number of stakeholders involved in staging the Games. For instance, most National Olympic Committees would object to a permanent site. Host cities commonly use the marathon broadcast to advertise themselves as a tourist destination, and so would be hesitant to sanction nighttime marathons.

The IOC’s best bet is, therefore, to step up efforts in the way of mitigating climate change effects. A good start would be for future host cities to build on Rio’s laudable push to associate the Olympics with the fight against climate change. The IOC should also leverage the Olympic brand – one of the most valuable brands on Earth – by licensing it only to carbon-free enterprises.

As an organization in charge of a truly global event, the IOC is in a position to fulfill Drummond de Andrade’s vision and help more and more “flowers” break through the “tedium, disgust and hatred” climate change will bring about.

[7] Sport4Climate | Education, “Climate Change: What the Olympics Have To Do With It,” Connect4Climate.org, July 28, 2016, https://www.connect4climate.org/event/climate-change-what-olympics-have-to-do-with-it, accessed November 2016.