“Rappi is an initiative to create the best online shopping experience. It is created by joining the best mobile shopping interface in the world with a superior logistics delivery model”(1)

Bogota, Colombia. Sunday after a long night out. You crave a burger but you would also love some pizza with it. At the same time you remember that you do not have cash and you realize that there is nothing for breakfast tomorrow. You log into Rappi. After 30 minutes the doorbell rings. Your prayers are heard.

Colombia is a country with high unemployment, low wages, precarious postal system, and rampant inequality. Middle and higher class individuals are used to having private messengers to run all their errands. Most restaurants and grocery stores have delivery services since people want to avoid traffic at any cost. However two problems remain. One, customers have to submit different orders for each establishment. Two, some products and services (e.g. buying a present for your girlfriend) still don’t have delivery services.

Rappi is a mobile app that aggregates thousands of products and creates an online marketplace with virtually no boundaries. Personal messengers run all kinds of errands in 20 minutes to an hour. The company has 4 main services (but is not limited to those): convenience store, supermarket, restaurant, and pharmacy. Customers download the app and place an order paying with their credit card. A messenger will receive the order and go to the different establishments to pick up the different products. The client pays a delivery fee between 2 to 4 dollars depending on the complexity of the service.

Rappi is disruptive since it was able to overcome the fact that there is no reliable shipping service in Colombia. Also, by tapping into Colombian people’s value on convenience and service, it has been able to serve thousands of costumer effectively changing online commerce in the country. The company has 400.000 active users, sells USD2.7 million a month and has managed to raise money from 12 international funds including Andressen Horowitz.(2) 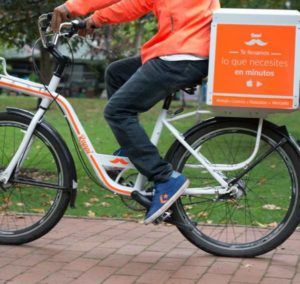 Rappi relies on a network of over 2.000 messengers that are spread out in Colombia’s biggest cities. Both customers and messengers have the application in their phone and rely on GPS tracking to determine their location. The company matches a request to the closest messenger to guarantee the fastest delivery time.

The application “pushes” products based on a list of merchants that are in the client’s vicinity. This is the company’s main source of revenue. They have partnered with businesses that 1) advertise on their platform, and 2) agree to pay a (non-disclosed) commission fee for every order. That being said, if the product or service is not listed, the messenger has the autonomy to decide where to purchase the product. It can also decline the request in which case Rappi with get in touch with the customer to find more information and problem solve the issue.

The key enabler for Rappi’s customer promise is its network of messengers. These individuals get 100% of the delivery fee and can work flexible hours. The main requisite is that they own a bike or motorcycle. According to the company, a traditional messenger earns about COP 5k per hour (~USD2). With Rappi, they can earn around COP20k (~USD7) per hour. A typical messenger works around 200 hours a month earning a paycheck of about COP2M (~USD700), significantly higher than the minimum wage of COP560K. The messenger pays out of pocket for the products ordered and after delivery it is reimbursed by the company.

So far, Rappi has only been adopted by higher income costumers. That being said, given their low fees and its inherent advantage over traditional retail shopping experiences it has the potential to appeal to broader segments of the population. This is especially relevant since the online channel is virtually untapped in Colombia with virtual sales of only ~USD3.5 billion in an USD290 billion economy. Only 1 in 10 people in Colombia purchases products online and Rappi is uniquely positioned to reinvent this category.(4) However, to achieve this it will have to 1) Increase the number of merchants in its site, 2) increase its customer base of 400k by helping overcome people’s fear of online transactions, and 3) expand into middle size cities where a big part of the population is concentrated. Will Rappi be able to establish itself as an alternative to Amazon in low and middle income countries?

The Washington Post: An Innovative Force in the Digital News Industry

TaskRabbit: Say to No to Chores